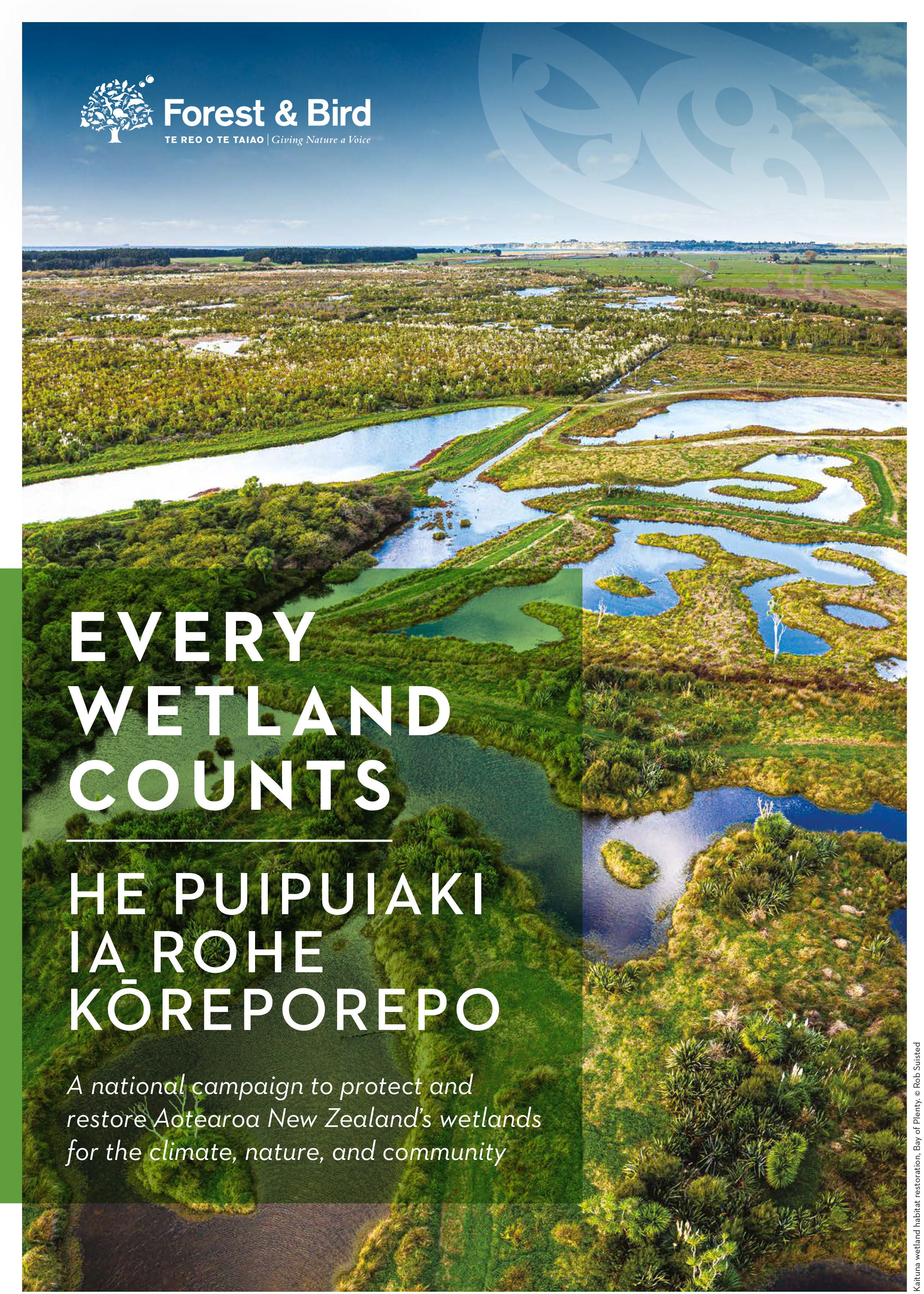 Today on World Wetlands Day, eleven non-governmental organisations are launching a new campaign, Every Wetland Counts He Piupiuaki Ia Rohe Kōreporepo, calling for the Prime Minister to set a goal of doubling the extent of natural wetlands in Aotearoa by 2050.

Only 10%, or about 230,000 hectares, of New Zealand’s original wetlands remain. Wetlands continue to be threatened by agriculture, urban development, mining, quarrying, and landfills.

Forest & Bird and 10 leading climate, environment, health, and recreation organisations are calling on the Government to think strategically about wetlands’ role in the face of climate change and asking for the Prime Minister and her ministers to:

Double the extent of natural wetlands by 2050 with interim goals.

Establish and implement an Aotearoa Wetland Protection and Restoration Plan for carbon sequestration and the mitigation of climate change effects with ambitious, measurable, and enforceable regional targets.

Provide $100 million of additional government funding in the next four years to establish seed funding for new wetland restoration and paludiculture trials.

Require land managers to account for drained wetlands in the Emissions Trading Scheme, and protect and restore wetlands as emission reduction mechanisms in Farm Environment Plans.

Stop the current destruction of wetlands by agriculture, urban development, mining, quarrying, and landfills by ensuring existing regulations are not watered down – and are properly enforced.

“Doubling the natural extent of wetlands in Aotearoa by 2050 is achievable and it is the most responsible thing we can do for the climate,” says Mr Hague.

“In the short term, new laws must remain strong to halt the continued wetland damage and annihilation by destructive industries.”

The National Environmental Standards for Freshwater, which came into effect in 2020, made earthworks within or near a natural wetland a prohibited activity if those works are likely to drain the wetland.

But in 2021 the Government caved to industry and proposed ‘additional consenting pathways’ giving industries, including coal mining, the ability to destroy wetlands. A decision on this is expected in the first quarter of 2022.

“In the midst of a climate crisis, landfills, quarrying and mining shouldn’t be prioritised over wetlands. And we cannot ignore the opportunity that restoring wetlands affords. Peatlands and coastal wetlands can store and sequester significant amounts of carbon.”

Forest & Bird and the other groups are asking for $100 million of additional government funding over four years to establish seed funding for new wetland restoration and trials of paludiculture, the practice of crop production on wet soils.

“There are already countless iwi and community wetland restoration projects happening around Aotearoa,” says Mr Hague. “We’d like to see high-level strategic thinking about how many hectares each region will aim to restore, and discussion around which wetland restorations will bring the greatest benefit.

"This is urgent. We’re in a climate emergency, and while programmes like Jobs for Nature are valuable, they are not enough – wetland restoration for climate mitigation urgently needs resourcing and action.

“We are looking to a future where healthy wetlands support a healthy climate, provide for community as mahinga kai food gathering places, and are home to thriving populations of native birds and fish.”