It’s been a great season for algae. It’s been blooming away in vast quantities on our waterways in the summer heat. Low river flows give life to these leafless, stemless plants that soak up oxygen in the water and turn free-flowing rivers into turbid puddles.

Pollution helps, of course. Add a few million litres of animal faeces and urine draining off the landscape and nitrogen enrichment helps the algae garden grow. It’s highly visible in green or brown clumps trailing through rivers and streams and blooming away in lakes. Lake Horowhenua, a poster child for man’s destructive villainy, blooms a bright emerald green in the summer sun. It’s a wonder even algae grows in its  poisonous depths, and its near neighbour, the Manawatu River is in a similar state. Global warming gets the blame, but global warming has only highlighted a problem that already existed.

Anglers have become familiar with its effects. Wading is a slippery business and even with the assistance of a wading staff, there are sure to be bruises at the end of a day on the river. 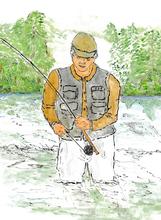 Lethargic fish, oxygen-starved, and in poor condition take a fly and flop about a bit before coming to the net where they roll over, half dead before they are caught. You have to go to the high country to catch good fish, or find a spring-fed stream that hasn’t been hammered by like-minded anglers or guides and their clients. Some of the best waters are being sequestered for the exclusive use of those willing to pay, a practice that goes against everything our forebears fought for, when they introduced trout more than a century ago. There was a saying: “On the river, Jack’s as good as his master.” It no longer applies. Jack has to win Lotto to be as good as his master.

There’s an upside to the algal bloom. While much of it is unpleasant some of it is edible. One day, in the concrete jungle, at a sidewalk cafe, a customer will order a latte and a slice of something sweet and both will have a tinge of green. He or she will go to whatever their form of transport and it will run on a distillate of what they had just eaten.

The recent season has been hard going. A  visit to Lake Rotorua proved to be futile. We knew as soon as we arrived that things would be hard. There were no boats on the water, no anglers at the rivermouths and the water temperature was above 20 degrees. On the second day we spotted an angler in the water and his wife was reading a book on the shore. We asked how he was getting on.

Rotorua offers some interesting places to visit and enjoy, so we spent more time being tourists than fishing. We caught nothing in four days.

There have been periods during the season when fish took the fly with some enthusiasm. Early on it was whitebait imitations, and while the water still had some winter chill there were good hatches of mayfly and caddis, but as summer heat took over and river levels dropped, it was night fishing that gave the best result, with brown and green beetle hatchings that got fish on the move. But late summer heat was relentless and fish have lost condition. They kept to the deepest pools and in deepest shade. A chilly night or two had them rising to cicadas  that fell to the water, easy pickings for tired trout. Before winter and the next spawning season, trout will have to regain condition. There is still a month or two to go. If the fish do not recover it will be a hard winter and the exigencies of spawning will take a toll from which many will not recover.

We’ve had two seasons like this, and low country rivers and streams are showing the effects. An Australian friend said to me a few months ago:”Come over to Tassie, the fishing’s fantastic.” His most recent message has been:”Don’t bother. The drought has caught up with us.”

Weather like this comes in cycles. I’m pinning my hopes on the next cycle being a lot kinder and I’ll spend less time casting and more time bringing fish to the net.