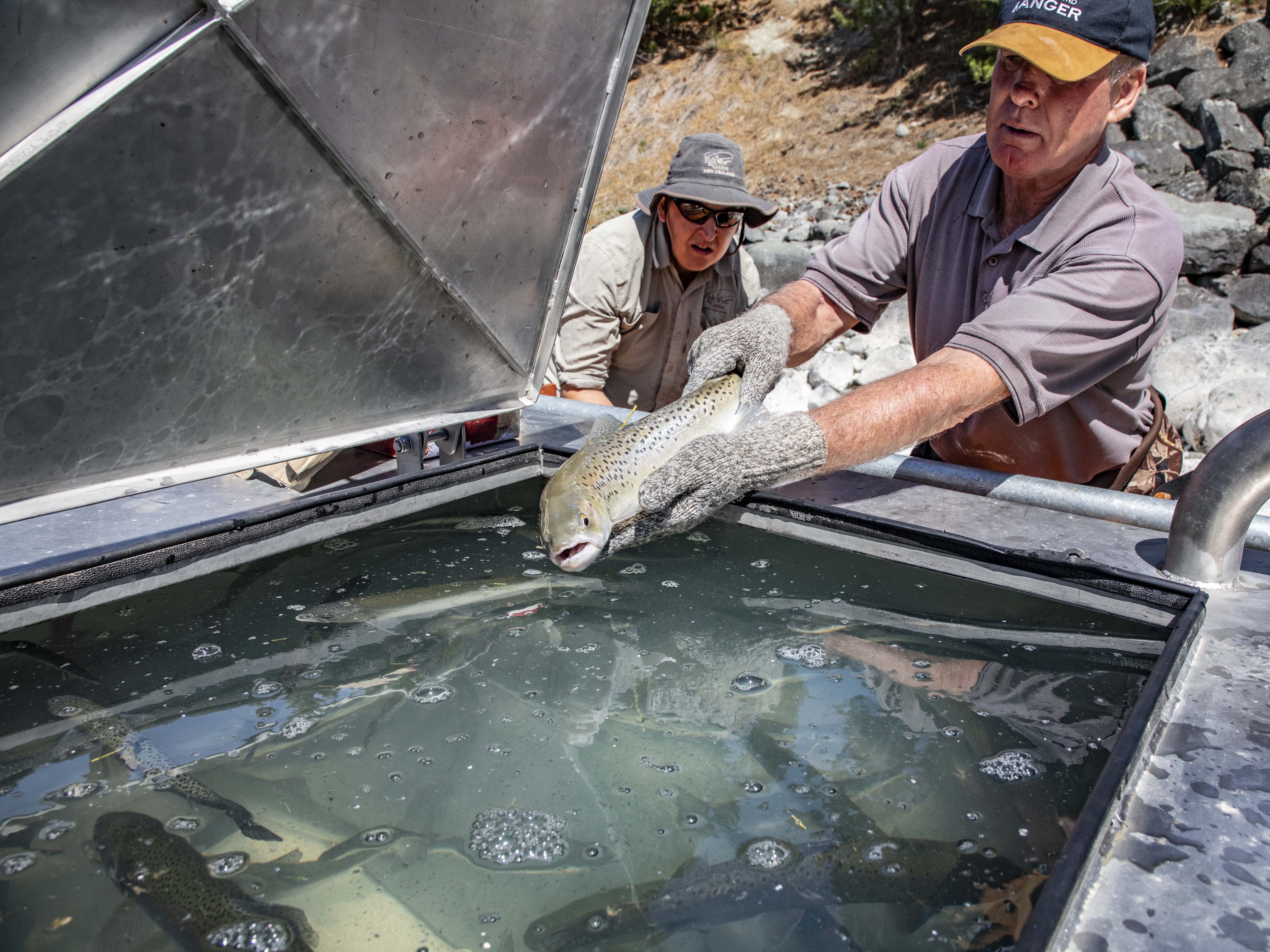 Anglers fishing the Tekapo Canal over the summer holidays have had an early Christmas present with a boost in their chances due to Genesis Energy and Central South Island Fish & Game (CSI Fish & Game).
A research project that aims to understand the contribution that trout which migrate from the headwater lakes make to the world-famous canal fishery has provided a benefit to anglers in the Tekapo Canal.
Watch the video here: https://www.youtube.com/watch?v=ZcKy4JrRKi0
During 2020, CSI Fish & Game have relocated around 900 trout from the upper Tekapo riverbed to the Tekapo Canal and 550 of those trout have been tagged for research.
The latest relocation of 400 trout (250 of which were tagged) occurred on the eve of the Christmas holiday period significantly boosting the chances of a successful fishing trip at a popular time to spend time on the water.
Lake Tekapo and the upper Tekapo River are managed by Genesis Energy for hydroelectricity generation and this is an important pathway for trout to migrate from the lake to the Tekapo Canal.
A unique combination of high rainfall events and infrastructure upgrades led to extended periods of flow release from the Tekapo Control Structure (Gate 16) to the upper river from December 2019 to December 2020.
Genesis Energy has helped the trout relocations by pumping-out of the control gate pond on two occasions during 2020 and that has enabled CSI Fish & Game to capture, tag and relocate hundreds of trout to the Tekapo Canal.
CSI Fish & Game are asking anglers to help-out with the research project by reporting the capture of tagged trout, even if that fish is released.
CSI Fish & Game Officer Rhys Adams says, "The tags are small, yellow-coloured, strips inserted by the dorsal fin and each tag has a unique four-digit number which must be reported".
"We also need to know the date of capture, location, whether it was kept or released and an estimate of its size".
Anglers catch reports of trout tagged from March to July 2020 has highlighted some interesting findings so far.
"Most tagged trout have been caught by anglers very close to where Fish & Game released them at the canal and they were a common catch in the first few weeks after relocation, so that a top-tip for a good spot to fish these holidays".
"Another interesting finding is that the fish have not grown appreciably over the few months since their relocation, which may have been expected in a waterway that produces some of the biggest trout in the world", say Adams.
"It’s early days in this project and we hope that over the next few years anglers report the capture of these tagged trout so we can see how they have grown over the course of their lifetimes.
Ultimately, we want to find out if an adult trout of Lake Tekapo origin can go on to become one of the many 10kg or larger trout that the canal fishery is world-famous for producing".
If you do catch a tagged trout please report the unique four-digit tag number to CSI Fish & Game as well as whether it was kept or released, approximate location, and its estimated size. Phone 03 6158400 or email csi@fishandgame.org.nz