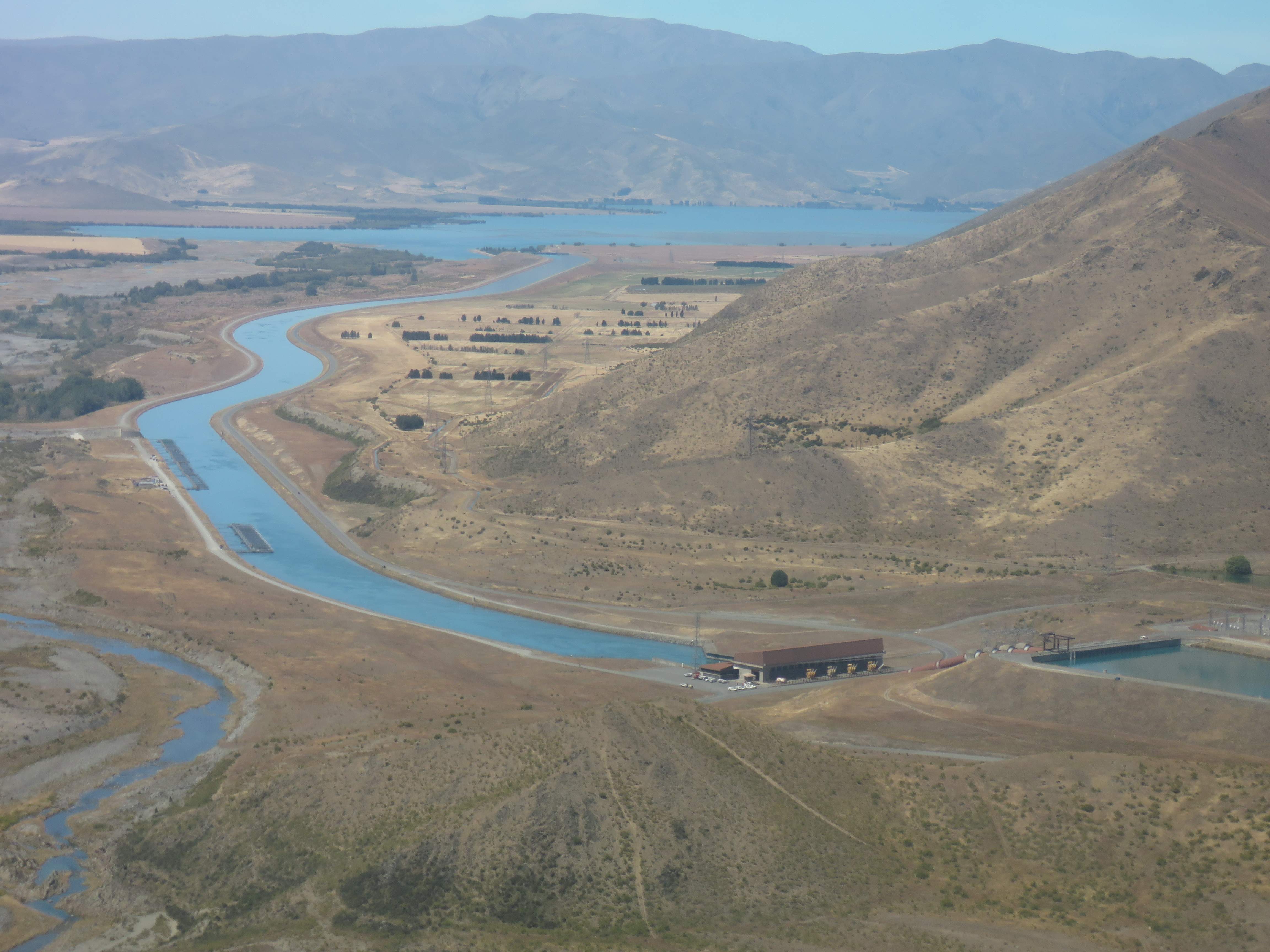 We are staring down the barrel of another winter and with only two weekends of the summer sports fishing season left it’s now or next season for those ‘guna’ fish there this season destinations.

The weather forecast for the coming weekend and into next ANZAC Day is encouraging.

Right: One of New Zealand's best spots for a monster trout, the 'Ohau C' Canal that flows between the Ohau B and C power stations.

There are certainly still opportunities left for those with motivation to wet a line.

We have had a ton of rain in the low country of late causing high-river flows for 2 weeks straight.

By the weekend the rivers should be clear enough to sight fish in the shallow water, albeit with high flows.

I had a look at the Opihi and Temuka rivers near SH1 on Thursday afternoon (April 20) and both were high but fishable.

Sight fishing would have been tricky but I did manage to spot a 2 pounder in the Temuka for 1 minute of spotting effort.

All methods would be worth a shot with this much water around.

I’m not sure if the lower Ashburton River will clear up quick enough, but if my observations from mid-April 2016 are anything to go by there should be a few fish around in the lower reaches downstream of SH1.

That was one of my ‘guna’ fish destinations this season but I won’t make it.

The long term forecast shows only a quick dousing of rain on Monday so all going well the river conditions should continue to improve towards ANZAC day.

If any sea runners were begging to get into rivers like the Ashburton, Opihi or Pareora the recent rain would have allowed this.

If you don’t make it out for a fish ASAP there are still plenty of winter fishing options between the 30th of April and the 1st of October and Love ‘em or hate ‘em the Mackenzie Basin canals are the most reliable of NZ’s winter fisheries.

With spawning underway soon the big ol’ browns will be getting aggressive and snapping at lures and pesky 6 pounders, and the rainbows will be hanging around trying to snatch the wayward eggs.

Then come July through October the rainbows will light up crimson for their crack at digging some gravel and spilling eggs into the canals for the awaiting hordes of salmon, browns and rainbow.

Think it’s easy to go up and catch a canal fish? Think again.

There is a lot of luck and a lot of skill involved but not a lot of reasons not to go up for a try yourself.

Other than running the gauntlet and swimming through power station turbines the trout in the canals are there to stay.

Confined to the canals sports fish will attempt to spawn in the best place they can find and evidence of this can be seen in the chunky cobbles on the canal banks.

The success of these redds to contribute to the fishery is considered negligible by Fish & Game, hence the year round open season.

The majority of natural ‘stocking’ in the canals is understood to stem from the downstream migration of wild juvenile trout spawned in headwater tributaries of the lakes that feed the canals.

These fish migrate through the canal control gates and power station turbines.

Surprisingly, small fish actually have a half-decent chance of surviving a trip through a power station.

Salmon owe their existence in the canals to the salmon farms, having escaped from the rearing pens at the farms or being released as excess stock from the hatchery near the Pukaki-Ohau A Canal confluence.

The canal flows fluctuate daily and often leave spawning redds high and dry or with little or no life giving flow of oxygen running through them.

If the eggs do hatch then there is no shortage of trout, salmon and big bullies ready to hoover up an easy meal of alevin.

Don’t get me wrong there will be some spawning success, but in the scheme of things spawning in the canals is not a major contributor to the sustainability of the fishery.

Fish & Game Officer Mark Webb was up at the canals on Good Friday and Easter Monday checking angler compliance with licencing and the regulations.

He said the fishing was relatively slow but he did see a few chunky 6-8 pound rainbows caught.

He reckoned the slow fishing was partly attributed to the lack of flow in the Tekapo and Ohau A canals.

He said although the catch rate was slow no one felt ripped-off as the fish were there, swimming past, porpoising, belly flopping, and general teasing anglers just a cast length away in the clear waters.

That was one other factor Mark thought was not in the anglers favour: very clear water, even in the Pukaki Canal.

Trout and salmon have good eye sight so only well-presented offering would have been engulfed!

Probably best to target dawn and dusk when the light is dull or night time when these clear water conditions prevail.

Word on the canal bank was that no big break-out of salmon has happened from the farms for a while but there were a few getting caught near High Country Salmon/ State Highway 8 a week ago.

Well that almost concludes the second to last weekly report of the year.

Like I said at the start of the season: “It’s always good to hear from readers”.

So if you think of something interesting I should write about or have any feedback in general let me know by email radams@fishandgame.org.nz.

I’ll have to write another 30 more of these report next season so all ideas will be considered, and I’ll attempt to keep you informed!

Finally a couple notices for anglers interested in the Management of the Rangitata River catchment.

Mckinnons Creek hatchery are running a planting day at the spawning race based at the Rangitata Water Ltd irrigation ponds (AKA Rangitata South).

This planting will help to improve the juvenile rearing habitat in the race. If you want to give the hatchery team a hand, you can meet them at the south side car park of the Arundel Bridge at 9:30am on Saturday the 22nd of April.

Bring along some lunch, a pair of gloves and a hand towel.

Take waders with you if you have them, or other suitable footwear if you don’t.

Following the planting, Rangitata Water Ltd staff are holding an Open Day at 2pm to show members of the public how the irrigation scheme functions, including the rock bund fish screen.