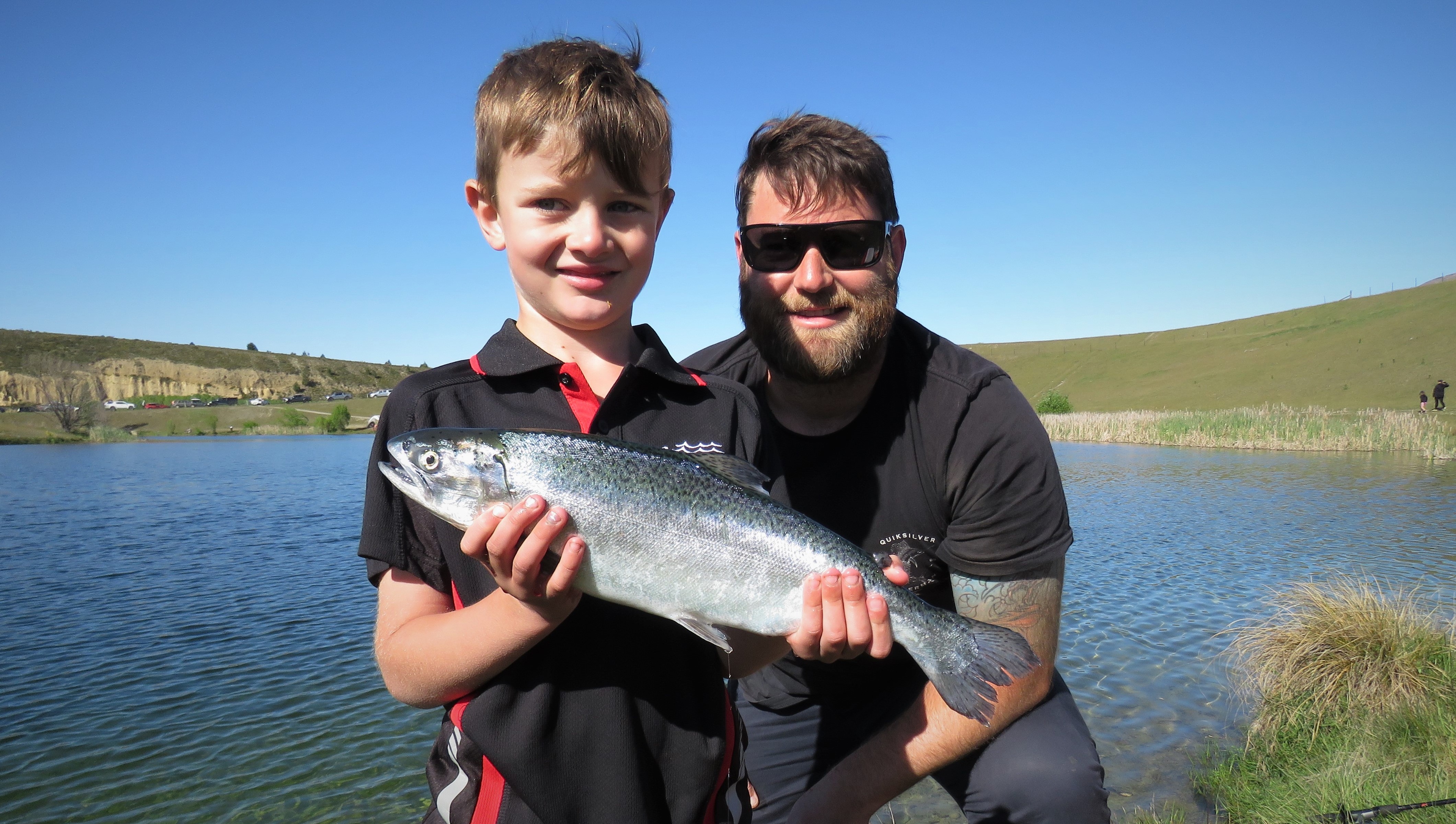 Did someone say salmon?

Roll your eyes now trout aficionados; this is a salmon-themed report.

Don’t look away, though; there is some important info for anglers looking to fish the Tekapo River after last weekend’s ‘wash-out’.

The Kids Salmon Fishing Day was held by Central South Island Fish & Game on Saturday the 5th of November at Loch Cameron, Twizel.

Eighty-two youngsters aged between 3 and 11 years, and their families attended and gave salmon fishing a go on an idyllic high-country waterway.

Forty salmon and one brown trout were landed during the event.

A massive THANK YOU goes out to Mt Cook Alpine Salmon, the major supporter of the event.

Jakes Hardware, Southern Alps Outdoors, and Meridian Energy and Kilwell Sports generously donated spot prizes — all the kids went home with a prize that will be helpful while fishing like a fishing lure, rod or sunhat.

Above RIght:  Success at the 2022 Kids Salmon Fishing Day for Nixon Philpott and his father Kane-photo by R Adams.

We encourage you to take a child or Junior angler out fishing to Loch Cameron over the next few weeks while this opportunity lasts – there is still plenty of salmon about, thanks to Mt Cook Alpine’s generosity.

Loch Cameron is a favourite swimming and picnicking spot so please keep it pristine - if you are lucky enough to catch a salmon, please take all fish waste with you to dispose of elsewhere.

A slide show of the 2022 Kids Salmon Fishing Day can be viewed here. 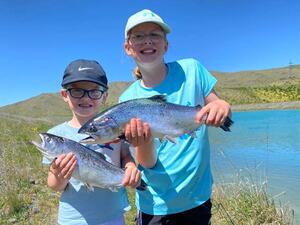 Over the past 10 or so days, many happy anglers have been going home with their daily bag limit of 2 sports fish in their chilly bins – in this case being 2 salmon.

The Ohau C Canal has been the ‘hot spot’ with salmon, most commonly in the 2-4-pounds size range.

Once a daily bag limit is achieved, an angler must stop fishing in that waterway and cannot fish any other waterways with an equivalent or lesser daily bag limit.

For example, if you have kept 2 salmon at Ohau C Canal by 8am in the morning, you can no longer fish any of the canals until the following day as all canals have the same daily bag limit.

If you continue to fish that same day at the canals, you are committing an offence.

Offenders can expect to have their rod and fish seized and an offence notice issued by a Fish & Game Ranger — ultimately, you may also be prosecuted in the District Court. 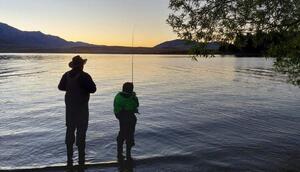 Deano checked on 50 anglers fishing the South Shore for lake resident salmon and only encountered one angler with a trout – a fair-conditioned 3-pound brown.

Deano reports there was plenty of salmon caught, but many were small, and not many were taken home.

I’ll use this as a timely reminder that all anglers need to be conscious of the way that any fish intended to be released are handled – for example, undersized salmon at Lake Heron.

Here’s our ‘Quick 5’ tips for handling fish with care:

Camping and fishing at the Tekapo River over the high-country opening weekend is a popular pastime for many trout anglers.

It was a big disappointment that flooding in the Fork stream tributary made the river high and dirty over the high-country opening, and on top of that, there was a spill advisory in place.

Fork stream has slowly dropped in flow, and when I crossed it on Wednesday was just starting to clear up.

There’s a good chance the river will be fishable this weekend, especially for bait and spin anglers; think of it as a delayed opening weekend of sorts.

The spill never eventuated but Lake Tekapo is full to the brim - spilling is still possible early next week.

I received first-hand confirmation from Genesis that spilling may occur from the early hours of Monday the 14th of November.

Camping in and around the riverbed is not advised from Sunday evening onwards (13th November).

Spilling flows can be monitored on the Gensis websitehere.

Genesis have advised that spilling may occur to the Tekapo /Takapō River any time from the early hours (midnight) of Monday 14th November.

Before accessing the Tekapo / Takapō River track for the high-country fishing season, be sure to read the ECan article covering sites of track damage and access advice.

If you are interested in the running of the council and the work we do, take the time to come along and meet Councillors and staff. 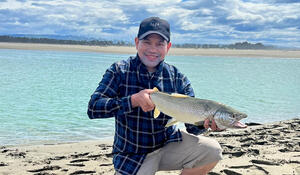 Each year show weekend generally turns on the weather, so the long weekend looks great for fishing,

The big, braided rivers are likely to be still a little bit messy and likely to clear from Sunday onwards. but there are some great lowland fisheries for anglers to try out.

Anton Ortiz, above right, caught this eight-pound beauty in the Ashley River last week; this fish is a great effort for Anton.

If you have any recent photos of your fishing exploits, send them to northcanterbury@fishandgame.org.nz

Fish & Game Officers Harry Graham-Samson and Matthew Garrick were down at the Rakaia River mouth this week and have described the new mouth pictured left, from last 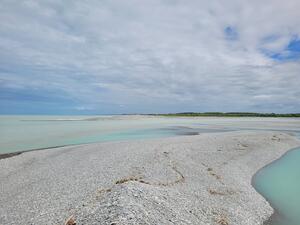 week’s fresh as “challenging” for anglers, so just keep this in mind as you plan a weekend fishing trip to the Rakaia mouth.

Sea-run salmon to show up soon

Although the Rangitata and Rakaia are high and discoloured currently, a relatively “dry” 10-day rain forecast gives a glimmer of hope that the rivers could clear up nicely sometime over the next week.

We expect to hear the word of the first sea-run salmon being caught for the season this November – likely from the lower reaches or mouths of the Rangitata or the Rakaia rivers.

Salmon anglers who fish these rivers and many other waterways in the North Canterbury and Central South Island Regions are required to obtain a sea-run salmon season bag limit card and carry it while fishing for sea-run salmon.

Please visit our website here to obtain your card and read up on all the season bag card information and regulations you need to know. 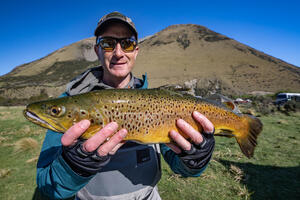 Glenn Pratley with his brown trout

North Canterbury Fish & Game Officer Emily Craig said, “it was great to see so many families out fishing together for the day. There was plenty of excitement when the junior anglers brought their fish in for weighing.”

“Just over a third of fish entered were caught by junior anglers. One junior angler had the biggest salmon caught on the day, and other junior anglers gave the adults a run for their money, catching some reasonable fish as well.”

With over $7500 in prizes, some anglers were out fishing at midnight to ensure they had the best chance of catching a fish in the competition.

However, there was also a spot prize draw, which meant anglers only had to present their fishing licence to go into the draw generously sponsored by the three Canterbury Hunting and Fishing stores-Christchurch, North Canterbury and Ashburton.

It is a valuable event for carrying out creel surveys and collecting fish data.

Ninety fish were weighed in, and the heaviest fish was a brown trout from Lake Selfe weighing 3.41 kgs.

The heaviest 25 fish were either brown or rainbow trout, and exactly half of the fish weighed in were salmon, followed by 24 rainbows and then 21 browns.

Kaiapoi angler Adrian Staal was up before dawn to be one of the first anglers casting out onto Lake Georgina as the sun rose over the mountains.

With there being lots of fish activity on the water, Glenn changed from a dry fly to a streamer, and two casts later, caught the second heaviest fish of the day, weighing in at 2.73 kg. 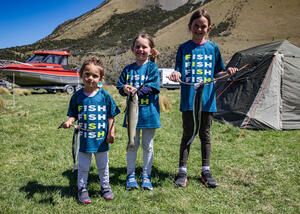 The three Lloyd sisters, Hannah (left), Charlotte (middle) and Lucy (right) from Rangiora, each caught a fish whilst out trolling on Lake Coleridge and came to weigh them in, all dressed in matching T-shirts.

Many more anglers were out enjoying the opening of the fishery, with plenty of fish around to tempt anglers.

188 individual anglers presented their licence to either weigh in a fish or enter the spot prize draw.64 of these anglers (34% of total) weighed in at least one fish.

A large majority (84%) of fish weighed in were caught by trolling on Lake Coleridge.

Table 1. Numbers of each species weighed in, species percentage of the total, and average Fulton K condition factors for each species.

A condition factor of 1.00 is an average fish in OK condition.

In addition, our first year of sampling salmon heads from the Kaikoura coastal fishery has been completed.

We let this project run a little bit longer than we initially planned as the fishing conditions this year off Kaikoura were not that favourable for salmon fishing.

This project could see how this fishery impacts the wider East Coast salmon fishery by telling us where those fish come from.

The winners of the $50 Hunting and Fishing Vouchers were: Fin Lucas Tee, Matt Foy and Virginia Carter.