A marvellous start to the season

Above Right: The evidence of Graeme Hughes' marvellous start to the season-Photo by G Hughes

His home-tied feathered lures are described this way, “black, gold ribbed body, ginger hackle over top of a red hackle topped with a barred ginger wing. A pinch of red fibers tied in for the tail to provide a little pizazz”.

Graeme returned to the same access point with his spin-fishing buddy for a late-morning fish on Monday.

An uneventful hour and a half of fishing was followed by a “bite-time”, and his friend caught and released 3 fish on a black n gold spinner.

I visited a few Waitaki access points on opening day, checking in on anglers as I could.

The river flow was high in the morning, up around 500 cumecs and dropping to about 430 cumecs by the evening.

Flows this high caused bank and bed erosion, making waters quite murky downstream of about Duntroon.

Second-hand reports from jet boating anglers were of challenging fishing and relatively low catches in the high flows, but the fish caught were in great condition. 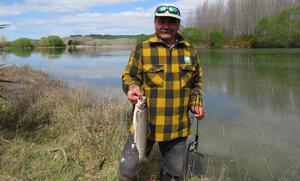 Boat anglers that persevered, fishing through the afternoon, experienced improved fishing as the water levels dropped.

The slightly murky waters didn’t seem to hamper the fun had by the many anglers I encountered fishing the Waitaki River irrigation offtake ponds, Bells Pond and Borton's Pond.

Spin, worm and flyfishing resulted in a healthy 1.5-3-pound brown trout or two for most anglers I checked on.

The black n gold tassie lure being one of the successful lures.

These are great family fishing spots and offer opportunities for anglers with limited mobility.

Check out where they are on our Waitaki River Access Guide here.

On my drive to the Waitaki, I caught a glimpse of a post-card perfect scene off the State Highway 1 Bridge as two silhouetted anglers fished the Opihi River at sunrise.

I thought I better do a U-turn and snap a pic so you could see it too. 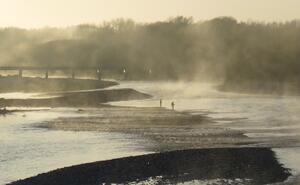 I quickly checked on the Anglers, Stephen and Alfie Hanley, before getting back on the road – they had caught and released a nice brown trout each on soft baits.

Reports have been variable from the Opihi Catchment rivers and streams so far – it seems the winter floods may have had an impact in places as some anglers encountered relatively low fish numbers and rearranged riverbeds.

I started my season on Sunday evening with a 1-hour trip to a tributary of the Opihi.

I caught and released two 1.5-pound browns flyfishing with a #16 pheasant tail nymph.

I resorted to blind-fishing after stumbling upon two bigger fish and spooking them - the evening glare made sight-fishing near impossible.

I’m interested to hear how you have got on fishing the Opihi Catchment rivers and streams this season – you can email me at radams@fishandgame.org.nz.

Opening at Lake Opuha was another classic to add to the list. 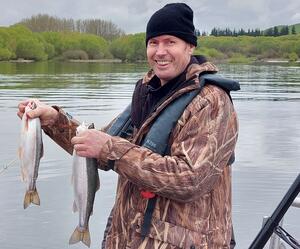 Our Rangers checked on 40 anglers, mostly in boats but a few from the shore too – all were fishing legally.

Most boats had caught a fish or three by 10 am, trolling a range of classic and modern lures in relatively shallow water – tassies in a range of colour options appeared to be most successful.

Regular spin fishing rods rigged with braid or nylon did the job for trolling in the shallow margins (1-3m deep) of Lake Opuha.

If you’re new to boat fishing or looking for some tips, be sure to check out our lake trolling tips on YouTube here.

All the best for the coming weekend’s fishing.

The weather and water conditions look favourable generally but keep an eye on the wind forecast.

Opuha Water Limited has notified that instream works are required to re-establish a flood-damaged irrigation pipe that passes under the bed of Te Ana a Wai River.

Return instructions are displayed on the card.

The 2022 Kids Salmon Fishing Day at Loch Cameron near Twizel will be held on Saturday, the 5th of November. 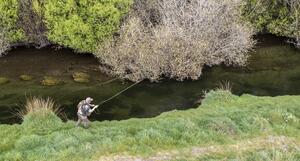 Neil Goldie tries to tempt one of the elusive fish in Harts Creek.

Canterbury turned on a stunner for opening day; the crisp, clear start of the day meant there was no excuse for anglers from getting out there fishing.

We had our Rangers out in force throughout the region, and they met with dozens of anglers who were brushing off the cobwebs and hitting the rivers and lakes.

Te Waihora/Lake Ellesmere was the place to be with anglers in the Halswell River area reporting good catch’s.

The lake closed to the sea on October 2, but by the look of the number of fish tempting anglers in Harts Creek and being particularly elusive as well, it would be safe to assume the lake has had more than a few sea-run trout enter it.

Quite a few anglers were checked by our team in the Lewis Pass area, and they were heading to try their luck on our fantastic backcountry fisheries.

These picturesque fisheries are well worth the extra effort to visit, as they offer a stunning experience as well as some awesome fishing. 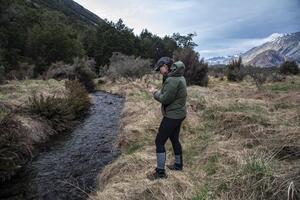 As we are all pretty much a new team, it was a great opportunity for us to get up close and personal with this area and check out the habitat that supports the Lake Coleridge Fishery.

We still have a bit of number crunching to do for our report, but will update readers when we have that info.

You can watch a short video of our trip below.

Friday and Saturday are looking like the pick of the bunch for a bit of fishing this weekend.

The cold snap mid-week hasn’t appeared to have increased flows in rivers and streams much.

Anglers can check the river flows via the Environment Canterbury website, which is updated hourly, here.

A survey for women anglers went out this week.

Fish & Game is undertaking our first-ever survey focused on women, which will assess the perceptions, opinions, and motivations of women anglers in New Zealand.

The findings from this project will be used by Fish & Game to help us support existing women anglers, and recruit new women into the sport.

Keep an eye out for our survey in your email inbox, and check out our video for more info.

Sponsored by the local Hunting & Fishing stores, the annual Lake Coleridge Fishing Competition is back this year!

Timed for the opening morning of the High-Country fisheries on November 5, North Canterbury Fish & Game will be operating a weigh-in tent at the turn-off to Ryton Bay from 9 am till 1 pm with a prize giving at 1.30 pm.

You don’t need to catch a fish to enter the spot prize draw, just present your licence at the tent to go in the prize draw.

-       High Country Opening Day is November 5; the Lake Coleridge Fishing Competition sponsored by Hunting & Fishing will be held this year.