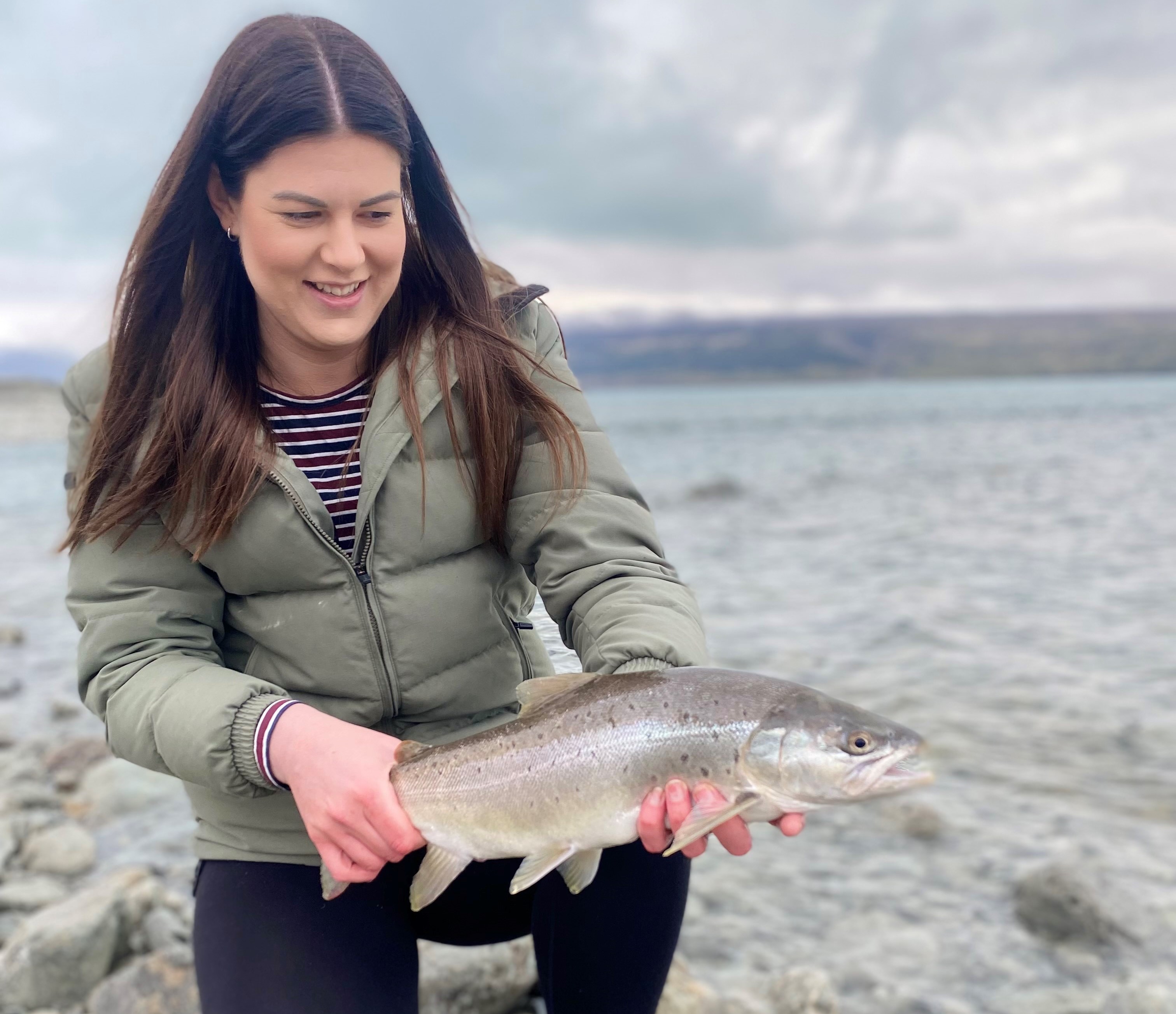 I’ll summarise, though, there have been some great fish caught this season.

First off, thanks to those anglers who email in their catch reports to us – I reckon the 34,000-odd report subscribers (12,000 weekly readers) greatly enjoy them too!

The first example of a great catch comes from Lake Pukaki, which I’ll label as an ‘unorthodox opening trip’.

While the rest of us were on low country waters like the Opihi and Waitaki rivers or Lake Opuha – Charles Smith and Kate Le Lievre spent October 1, fishing Lake Pukaki.

As the picture above right “says”, their choice of opening-day fishing spots was very successful. 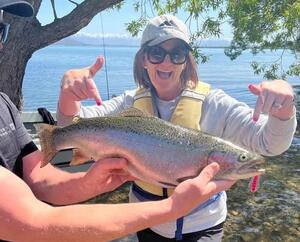 Now, some catches are sentimental; they will always be remembered for being connected to something or someone.

Steph Townsend’s Labour Weekend rainbow trout catch from Lake Benmore is a great example of that.

Steph’s dad Mike Moore died in March. Mike was a very keen angler who had a Bach at the Rangitata and fished in Lake Benmore area for many years.

Steph was using her dad’s fishing gear and went to his special spot.

As well as being a sentimental catch, Stephs 3.01kg (6.6lb) Benmore rainbow trout is an absolute cracker of a fish.

A keen eye will notice that a pink Tasmanian Devil was the successful lure. 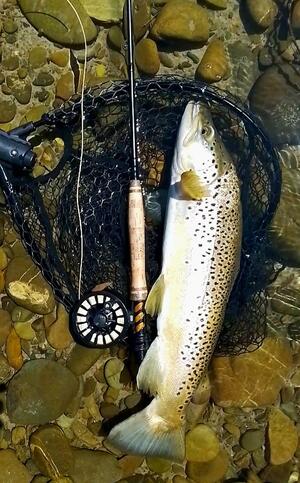 The next catch report makes me a little jealous, but it also stirs me up to get out fishing.

He recently caught an Opihi whopper, tipping the scales at 7-pounds.

Great catch Hamish! That’s a whole pound bigger than I’ve ever caught from the Opihi Catchment.

The fourth catch report I’ll share dates way back to pre-covid times in the year of 2013 AD. 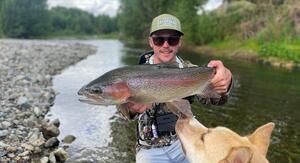 This fish labelled ‘0401’, has been caught four times.

This first time caught right at the bottom of the Hakataramea in September 2018 on its spawning run from the Waitaki River.

On this occasion, CSI Fish & Game trapped it and tagged it to research the interconnection between the Waitaki and Hakataramea trout populations.

Some 415 days later, in December 2019, it was caught and released by a client of fishing guide Paul Mcandrew 4 km upstream.

In January 2022, it was caught and released by Greg Downing a couple of km further upstream.

Other than being evidence of catch and release done right and that some Waitaki trout appear to take up long-term residence in the Hakataramea post-spawning — it shows that some of our trout are really old.

It was 5.2-pounds when Jacob caught it – it practically hasn’t changed size in 4 years.

That puts fish ‘0401’ at 9 years of age now – that’s a dinosaur in a flood-prone river like the Hakataramea.

For context, tagging projects at the flood-free Lake Alexandrina show most rainbow trout only lived to 3-5 years of age.

Lake Tekapo/ Takapō is currently at maximum consented levels, and water may need to be spilled via the spillway to the Tekapo/ Takapō River to reduce the levels of the Lake.

Genesis advises that spilling is likely to commence within the next six days.

Extreme caution is advised for all riverbed activities, including fishing and camping, as river levels may rise suddenly.

If you catch or spot a freshwater pest fish or have concerns you have seen one, here is what you can do:

You may also contact CSI Fish & Game (03 615 8400, csi@fishandgame.org.nz), and we will assist with fish identification and notifying DOC and MPI. 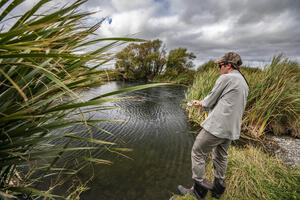 Reports are that the lower reaches of our rivers are fishing great.

If you want the river to yourself, this is the weekend for it!

For this weekend’s weather, there’s no beating around the bush; it’s basically terrible weather; there’s a dump of rain predicted for over the whole island.

The temperatures aren’t predicted to be cold, just a fair bit of rain.

Those keen and brave to venture out in the rain, you’ll have success, and wet weather fishing can be great fun; just ask any West Coaster.

We’ve had reports of good condition and numbers of sea-run trout being caught in the lower reaches of all our rivers.

And the staff in the fishing shops tell us the high-country lakes are fishing really well too.

Getting started in trout fishing 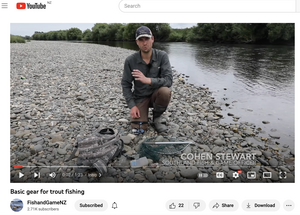 For newbie anglers, we often get asked, “What do I need to get started in trout fishing?”.

At Fish & Game, we have a bunch of handy short videos on tips and tricks for fishing on our YouTube Channel.

We put together this quick video on the basic gear you need to get started in trout fishing.

There are heaps of other fishing videos on our Channel, as well as our more in-depth four-part series on fishing. 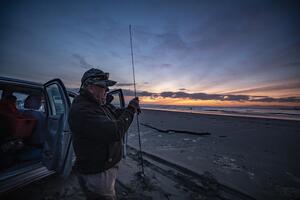 Angler Neil Goldie sets up his salmon rig at the Waimakariri Mouth.

Our anglers tell us of a few salmon being spotted in the Rakaia and Rangitata Rivers lately.

Nobody has sent in any pictures of any caught fish yet, but if the silver bullets are being seen, it won’t be long till some catches one.

More bits of info from the Coleridge competition

One of the more interesting bits of information gleaned from the Lake Coleridge Fishing Competition is that a large majority (84%) of fish weighed in were caught by trolling on Lake Coleridge.

This clearly shows that Lake Coleridge is a great spot for boat anglers, and with its close proximity to Christchurch, a great place to visit for a bit of fishing.

Ryton Bay, Lake Coleridge, is a great spot for both boat and shore based angling

An excellent tool for checking the conditions at the Coleridge lakes is the website Windy.com; they also have an app you can get for your smartphone.

Windy allows you to get an indication of what the wind speeds are likely to be up there, making choosing a boat launching site easy.

Another great tool is Outdoor Access’s network of live-stream web cameras, which show you real-time imagery from Lake Coleridge and 18 other popular fishing spots in the region.

It’s a subscription-based site, but it saves you a lot of time and effort, enabling you to see what conditions are like at these sites right now.

If you want to look at what the service offers, check out the screen at Hunting & Fishing Tower Junction’s fish hut to see the Lake Coleridge live feed.

For non-boat anglers, take heart that shore-based anglers caught some big fish up there during the competition, with the two heaviest fish coming from the surrounding lakes.

What if I can’t find the waterway I want to fish listed in the regs book? 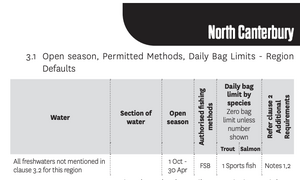 We’ve had a couple of enquiries lately about rivers that aren’t listed in the regulations booklet.

Each Fish & Game region at the start of the regulations generally has a catch-all regulation for unlisted waterways.

For us in North Canterbury, it’s regulation 3.1 at the top of page 27, pictured right.

For some other regions, it can be mentioned in the notes, but generally, it’s listed at the start of the regulations.

It’s important to note that if a waterway is listed by Fish & Game, it’s a good spot to go fishing.

This bit of info can be especially beneficial for new anglers or if you are travelling somewhere where you haven’t fished before because if we’ve put the effort in for a regulation, there’s fish there.

If you have any recent photos of your fishing exploits, send them to northcanterbury@fishandgame.org.nz; even if they aren’t from our region, I’ll pass them on.