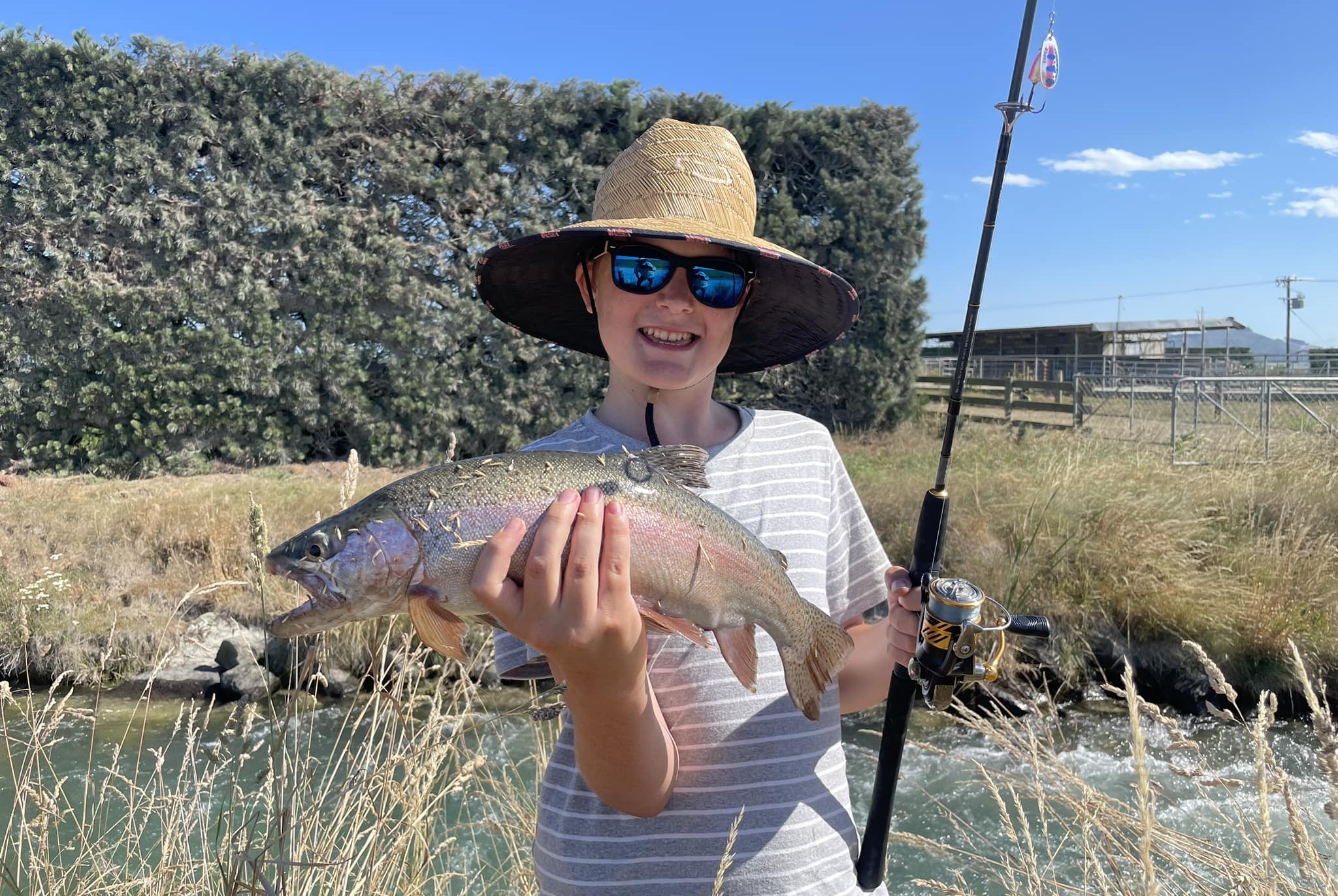 There are just a couple weeks to go in the school holidays — still time to teach the whippersnappers a thing or two about fishing.

Like Dan Isbister, you could even re-live your childhood school holiday fishing adventures and take a young one to your old fishing spots to see if there are still fish about like ‘back-in-the-day’.

Dan’s son Thomas won’t have to listen to his dads’ old stories anymore – he’s got his own “big rainbow from spot X” story now – and the photo to prove it.

Good on ya Dan and Thomas — I hope sharing your story motivates a few experienced fisherfolk to take a kid out fishing before school starts again. 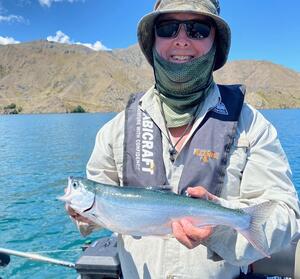 Sockeye enthusiast Howard Lewis reports that he and his buddies easily caught their limits of sockeye last weekend, fishing the bay near Benmore Dam on the weekend.

They trolled spoon-type lures with the aid of a downrigger in 7-14m depth but also, on hooking up trolling stopped the boat and caught a lot casting and jigging – targeting the school found by trolling.

And listen up boat-less anglers; they also caught one casting off the boat ramp jetty.

Sockeye up to 2.5 pounds were caught.

If this sounds like a bit of you, be sure to give it a go this January – by Waitangi Weekend, many sockeye will stop feeding and colour up for spawning – during this process, their flesh quality reduces.

Although our sea-run salmon runs ain’t what they used to be, the tradition of salmon fishing and what it entails is still alive. 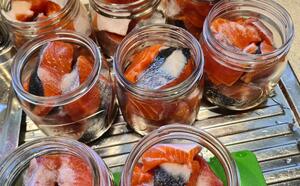 It’s fair to say salmon fever has struck a few of us this season – spurred on by recent reports of some great fish caught.

Unlike yesteryear, when fever-bound anglers would aim to catch over 50 sea-run salmon each season – the season bag limit has brought a new reality – just two sea-run salmon can be kept across the combined waterways of the North Canterbury and CSI Regions for the entire season.

The goal of severely restricting harvest with the season bag limit is to ensure enough sea-run salmon reach the spawning grounds to keep our tradition of sea-run salmon fishing alive.

One part of that tradition we cherish is bottling salmon.

In yesteryear, anglers would fill their cupboards with bottled salmon to slurp down with delight over the year.

Now, each and every bottle takes on special meaning – to be cherished more than ever perhaps and to be bought out only on special occasions and for distinguished guests whose eyes light up at the sight.

Fish & Game Ranger Allan Gilespie is a bottler from way back and did the honour of bottling a sea-run salmon caught recently at the Opihi for his mate Tony.

Allan shared his simple and delicious recipe for bottling salmon:

Meridian Energy has flushing flows of at least 450 cumecs scheduled from midnight to midnight on the 25th of January. Flushing flow are subject to change.

ECan has a flow recorded located on the Waitaki River near Kurow - view here. 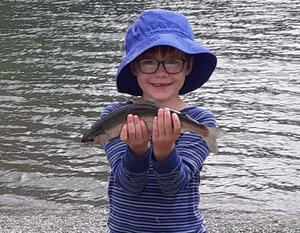 A big thank you to all the trout anglers who answered our call for pictures last week; we’ve had a great response, as I was a little bit conscious that the fishing report was salmon centric for a little while.

It was Peter’s first time fishing, and they went to Lake Lyndon on Wednesday.

They fished from the shore, and Peter caught this rainbow trout on an egg fly imitation using the 'heave and leave' technique.

Reuben didn't weigh it but guessed it was about 1lb or just over, and it was 35cm long. 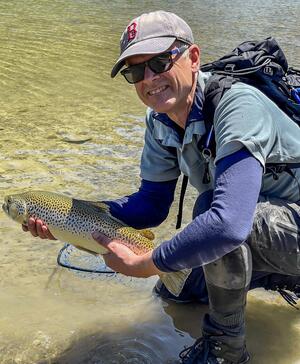 Paul Bridgeman sent in the picture, left, of a super selective brown trout from a high-country lake.

He said it turned down two nymphs and two dry fly’s before Paul put the right dry fly in front of it.

Paul said that was on Sunday, January 8; it will still be there if someone else wants to have a go. 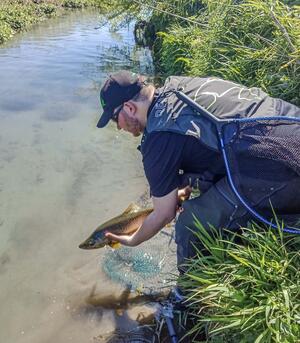 There are some great waterways close to the City that are great for those that are time-poor and can only get away for a quick fish in the morning or evening.

With the long summer days, it means there are quite a few hours for fishing,  and if the weather’s great, how about taking the family or some friends along with you? 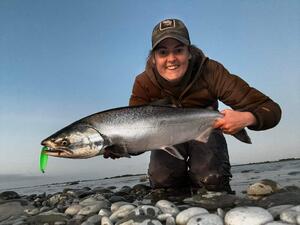 We also have had some great salmon pics sent in; Fishing Guide Hannah Clements caught this silver gem in the Rakaia last Saturday.

Judging by the number of completed salmon cards I’ve had handed in this week, last Saturday was a big day on the Rakaia River, with quite a few salmon being caught and kept.

It’s great to see anglers achieve success, and a common sentiment from the completed salmon card anglers is that now they can go and focus on the other great fishing that the region offers them.

Andy Burrell was one of those successful anglers on Saturday, and he sent in this picture of his first Rakaia salmon. 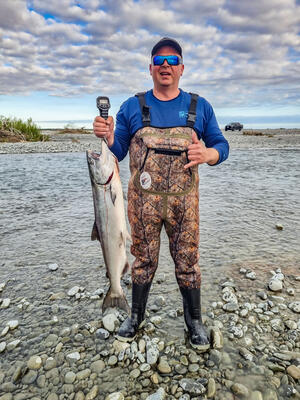 He was pretty excited to snare his first Rakaia Salmon on an overcast evening in the lower reaches of the Rakaia.

He thought that a little pool he had tried a couple of times on stinking hot days finally paid off on a cooler evening or maybe just held a fish on that night.

He said his mate Simon Bullmore did a great job of tailing it in a tricky spot, and we had it on land after a nervous 10 minutes or so.

The fish weighed in at 15.3 lbs, and he took it for the smoker and was pretty excited to get his first one on the card.

On the subject of smoking sports fish, a few anglers have had phone calls from me this week after they have dropped salmon and rainbow trout off at commercial smokehouses.

Anglers may not be aware that commercial smokehouses and dual-operator butchers are required to keep a bunch of records of fish deposited to them for processing, and they must give that information to Fish & Game.

Part 4 of the Freshwater Fisheries Regulations 1983 describes the regulations these businesses must follow when processing sports fish.

Throughout the season, we frequently visit these premises and see what has been put in for processing, and we follow up when we see things that pique our interest.

I won’t give all our secrets away, but the register these premises hold gives us a good idea of non-compliance with regulations (which is minimal but here are generally just a few questions that need answering).

Last season, these visits proved a handy method by which we could follow up with anglers who hadn’t returned their completed sea-run salmon cards but had caught and kept fish.

We are working with the Ministry for Primary Industries auditors to ensure that these operators follow their obligations in instances where we have spotted them not collecting the appropriate information correctly.

And to close with a request from the smokehouses - make sure you have your fishing licence handy when dropping off fish and offer the number to them; it means they don’t have to ask for it as it is required in the regulations; it means you don’t have to go home to get it and slow down the whole process.

This weekend looks like another great one for some fishing; in fact, it’s almost worth saying rinse and repeat, as both Saturday and Sunday look perfect.

There's no real excuse to stop you from getting out there and enjoying the summer conditions and having a fish.

Little Rakia Boating Club is holding their annual Giant Slalom on February 11 in the lagoon; registration closes on February 3. Do not miss out, as entries are limited to 45 Boats, so if you are keen to participate, contact Graeme at 0275772257.

The 40th anniversary of the Rakaia competition, the largest freshwater fishing competition in New Zealand, attracts over 700 entrants yearly.

If you have any recent photos of your fishing exploits or fishing events you want to publicise, send them to northcanterbury@fishandgame.org.nz ; even if they aren’t from our region, I’ll pass them on.