Anglers asked to 'tell all' on fishing habits

Fish & Game officers are preparing to quiz over 1000 anglers about their fishing habits on Opening Day, as the new fishing season (October 1) – gets underway on the Rotorua lakes. 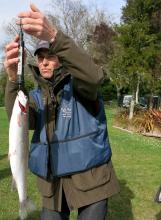 Lakes Tarawera, Okataina and Rotoiti will reopen after a three month shutdown for spawning over winter, with more than 1200 anglers expected to try their luck.

They stake out boat ramps and take to the water to survey hundreds of anglers on their fishing success and methods, and weigh and measure fish.

“That one very lucky fish is one of 40 fitted with red tags released into the lakes earlier this month in the Fish for Gold promotion.

“So it’s a real nail biter to see whether one of the 1200 anglers who’ve entered Fish for Gold can hook it by the deadline, ” says Fish & Game Officer Matt Osborne.

We expect that Lake Okataina will continue the trend seen over the last few seasons and produce the largest fish, due to favourable growing conditions and lower angling pressure, he says, with Lake Rotoiti producing the second biggest fish on average.

Across in the Auckland/Waikato Region, anglers have been urged to consider the lower Waikato River, as a great trout fishery if the water temperature is still below 19°C.

“Trout migrate to the Lower Waikato from all over the Waipa catchment to feed on smelt and other small fish during the spring and early summer,” says Fisheries Manager Dr Adam Daniel.

“The lower Waikato is one of the most underused stretches of river in the region with great trout fishing in and around Hamilton for both boat and bank anglers.”

If the opener happens to be wet the region also has some great spring creeks that are a good alternative when other rivers are unfishable, he adds.

Taranaki Fish & Game is tipping local trout streams to be in good condition for the new fishing season.

Rivers such as the Waingongoro in south Taranaki hold good numbers of brown and rainbow trout and should fish well with spin gear. “The Patea River in the reach between Stratford and Toko will also produce some nice brown trout and the occasional rainbow.”

Mr Stancliff says if river conditions are unsuitable, then fishing in lakes Ratapiko, Opunake, Rotomanu and Lake Mangamahoe (fly fishing only) will be well worthwhile.

Further south, the new season is shaping up to be a “cracker” in the Wellington Fish & Game region.

“We’ve largely had benign winter conditions, with no major floods, which means the fish stocks have had a good chance to recover from the arduous spawning period and any angling pressure last season,” says Manager Phil Teal.

He says Wellington anglers are being reminded that “they've got an amazing trout fishery right on their doorstep in the Hutt River.

“Drift dive surveys from last summer show the trout population and size of the fish continues to be right up there with the best New Zealand has to offer.”