Fish & Game officers say they’ve “done the hard yards” getting ready for the Fish for Gold promotion which puts a $10,000 prize up for grabs as the new fishing season gets underway on October 1, 2016.

Top right: Is this a 10k fish? One of the green tag fish before its release into a Rotorua lake.

Fish & Game Officer Mark Sherburn says the 30 green tagged fish at the centre of the promotion were released last Wednesday in bleak, cold and rainy conditions.

“We’ve made no secret of the fact that the 30 green tag fish have been put, ten apiece, into lakes Tarawera, Rotoiti and Okataina.

“It was quite an operation that involved transporting fish in our live trout truck and the transferring them to our runabout, into an oxygenated plastic tank, for the trip out into the lake.” 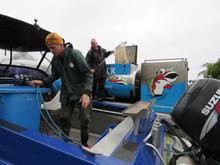 Right: Transferring the Fish for Gold trout to a boat before heading out to free them.

But Mr Sherburn says that “naturally we won’t be giving out any further details of the release places, but let’s just say you won’t catch one sitting at home!”

Anglers will know immediately if they catch one, he adds, as the green tags are prominent and the fish are healthy specimens around 35-45cm long.

The other envelopes each contain a $200 tackle or voucher prize, “so every qualifying angler who returns with a Fish for Gold green tag will win a prize, even if it’s not the big one.”

Mr Sherburn says anglers and families who are planning to fish any of the three lakes from opening on, are urged to “enter and have a go” as they have nothing to lose and entries are completely free.

“There’s still time to enter as entries don’t close until September 30 and although we are only accepting the first 1200 entries, we are still some way off that figure.

“Our hope that Fish for Gold will stoke up the fun and excitement factor, and build some suspense around ‘will I catch a 10k fish?"

Mark says that because the October 1 Opening Day falls on a Saturday Fish & Game expects a strong turnout of fishers, especially if the weather plays ball.

“Our officers and helpers will be out in force as usual”, he says, “and we traditionally talk to around 1000 anglers on the three most popular lakes – Tarawera, Rotoiti and Okataina”.