Please be aware at all times of local and national regulations to ensure the safety of others and the sustainability of Gamebird Hunting. 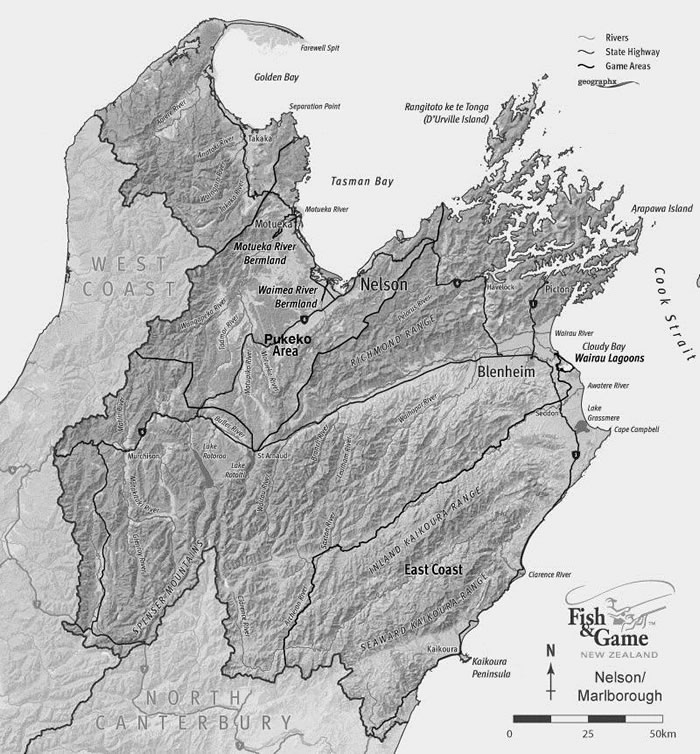 Golden Bay is under-utilised as a game hunting area and is well worth a visit. Although traditionally a Grey duck stronghold, Mallard are abundant particularly in the coastal areas of the Aorere and Takaka Valleys. Black swan are in high numbers around Farewell Spit/Puponga and good numbers are also found in Westhaven. On modified and developed country Paradise shelduck can be abundant. Quail are concentrated around the edge of broken bush and shrub land margins in the warm drier country, especially towards the east of Golden Bay and the fringes of Abel Tasman National Park. Pukeko abound in wetlands adjoining developed pasture, particularly in the lower Aorere Valley.

Populations of Mallard duck are found in the coastal estuaries and lower country with farm ponds also productive at times. Paradise shelduck can be found throughout the region in moderate numbers. Good populations of quail exist on forest margins, recently felled forest areas and rough land throughout the district, although the hunting is often challenging due to thick scrub that makes any follow-up (after the initial flush) very difficult. There are good populations of Pukeko in the Moutere/Mapua areas and as a result of increases in the population and crop depredation complaints in the past few years, the “Pukeko season” has been extended to alleviate the problems. Limited numbers of Pheasant can be found scattered throughout orchards, foothills, forestry edges and river bermlands, particularly the Waimea, lower Motueka/Riwaka plains and the Moutere.

The many rivers and streams, flats, estuaries, wetlands, and Marlborough Sounds offer excellent hunting opportunities. Mallard are the dominant species with lower numbers of native ducks depending on location. Higher numbers of Grey ducks are found in the Marlborough Sounds and Pelorus Valley but please take care to identify your target because the area is home to an abundant Grey teal population. Black swans occur in moderate numbers in estuarine reaches. Quail can be found scattered throughout most river beds, notably the Awatere, Wairau (upstream of Renwick) and Waihopai Catchments, where broken cover and scrub-lands exist. Most quail hunting requires permission to hunt on private land and this is usually granted to responsible, well-presented hunters.

These areas offer some of the country’s prime quail hunting. The East Coast has localised populations of Mallard and further inland, Grey duck. There can be high numbers of Paradise shelduck particularly on the East Coast and inland Kaikoura.

This season there has been a regulation change in an attempt to increase hunting opportunities for pheasants in the Nelson Marlborough Region and to provide an incentive for landowners and hunters to undertake pheasant enhancement - whether it be habitat enhancement, predator trapping or breeding and releasing (which pursuant to Sections 53 & 56 of the Wildlife Act 1953 requires permit). Pheasant hunting in the Nelson Marlborough region is by permit only. Permits are available on request from Fish and Game at no cost, but there will be a requirement for hunters to fill in a hunter diary (as is the case for Chukar hunting in Central South Island). This will allow F&G to gather accurate information on pheasant hunting activity throughout the region in which it will be able to base future management decisions upon. Hunters who wish to access the Waimea Bermlands can obtain a map showing all the lessee boundaries and contact details from our office in Nelson.

Hunters please note that quail hunting is not permitted within the Motueka or Waimea Bermlands until the pheasant season opens. Access permission and permits are required from forestry companies. For more information contact the Richmond Office.

Hunting on the Wairau and Waimea Bermlands

Contact the Blenheim Office for detailed information on areas in the Wairau which are available or closed to hunters by agreement with the Marlborough District Council. Hunters wanting access to the Waimea berms must contact the Richmond Office prior to hunting for advice on which areas are available, and information on other issues.

The Council now manages approximately 80% of the swamp. Hunters are invited to make an application to hunt in this area on a ballot form that is available from the Blenheim office. Para swamp is being developed to improve game bird hunting opportunities and new sites are becoming available with time.

Hunting in the Wairau Lagoons

The Wairau Lagoons cover about 2000 hectares of saline marsh and mud-flats between the Wairau River mouth and the Vernon Estate to the south. During the autumn and winter months the predominant species in the Lagoons are game birds. Protected species will also be seen in the lagoons during the open game season. The protected Grey teal population in particular is increasing and hunters must take care to positively identify their target. Besides the obvious main channels in the northern part of the lagoons, and Te Aropipi Channel, which runs along inside the seaward Boulder Bank, few parts of the lagoons are more than a metre deep. The mud in some areas can be very deep and care should be taken in unfamiliar areas. Access can be gained via the end of Hardings Road. Duck-hunter access is off Redwood Pass Road (via permit only with strict access conditions - apply to Vaughan Lynn for gate code and access rules), or from the Wairau Bar using a boat. The water is brackish and shotguns require careful cleaning. Fresh water should be taken for gun dogs. The former wildlife refuge status over Big Lagoon has been lifted to provide additional hunting opportunities. The retention of this new hunting area will depend on the behaviour of hunters and adherence to the following code of conduct:

A separate hunting and dog permit from Fish & Game is required to hunt this area. An access and information pamphlet is available from either Fish & Game office.

The Nelson/Marlborough Council has jurisdiction or ownership over a number of reserves and lands where game bird hunting takes place. Land administered by DOC and district councils requires hunters to gain permission and permits before they hunt. Forestry companies also require hunters to obtain permits to enter their forests to hunt during the game bird season. Forests are closed to hunting during weekdays and the spring and summer months.

Due to security problems, some companies require refundable key deposits. Permission to hunt on all private land must be obtained from the land owner prior to hunting and this is usually granted to responsible hunters.