Nelson/Marlborough Both Barrels May 2018

Our compliance efforts in Nelson Marlborough this season were centred around the Nelson/Tasman area.

In fact, many of the hunters we spoke to thought it was the slowest opening on record in terms of ducks harvested.

This was surprising after our mallard counts indicated an increase on last season, on top of a decent increase on the year before that.

Three ranging teams searched many private ponds that abound in the Moutere/Nelson area, and a sweep of public waters around Waimea and Motueka estuaries.

Rangers were staggered by the number of unoccupied ponds that in previous years have been hunted.

Hundreds of ducks were enjoying a quiet time of things on these ponds, which was undoubtedly the reason why the hunting was so slow for those hunting nearby.

There just simply was not enough hunters around, with many making their annual pilgrimage to neighbouring regions and saving their ponds for the second weekend.

The guys on public water were also doing it tough with very modest numbers of birds harvested for the effort expended.

However, owing to fields of recently harvested maize, there were large numbers of shelduck in some locales – and a few groups did well obtaining limit bags if they were handy to these.

Compliance wise, we were delighted with the behaviour of hunters encountered.

From around 30 hunters checked, only one failed to produce a licence and none were found to be in possession of lead shot.

Staff caught up with a few hunters in Marlborough also with no problems encountered.

The hunting was much better here with limit bags featuring from Para Wetland, great hunting from the Wairau Lagoons, and private land also producing the goods.

Hunters urged to scout , be mobile

Flooded paddocks are a magnet for ducks.

Hunters in Nelson Marlborough have to be a steely lot.

Not having a ‘grain belt’ for a food source nearby – a veritable duck factory, or access to private land areas (where you can still have some very good hunting), many are left hunting public land, which has slowly seen ducks move away from these areas in search of better food sources.

You have to really work for your ducks in these areas, but occasionally the stars align and some good shooting can be had.

So what can top of the south hunters do to improve their odds?

Often our best public land hunting will coincide with heavy rain and/or high wind events, so if you’re able to, keep on the lookout for these events before they arrive, and plan your hunt around accordingly (check out great weather forecast sites such as windy.com).

Be mobile - You’ll get a great idea of the duck population if you take a drive around after a deluge of rain.

Ducks love paddock puddles and after a heavy soaking, traditional habitats will be vacated in favour of wet paddocks filled with worms – so take a drive around farmland areas and knock on a farmer’s door – you’ll be surprised what they say.

If you can’t hunt then, lock that information away for the next time a heavy rain event occurs.

Go further afield - At least once a year it’s good to experience hunting in other regions, and the further south you go the more ducks there are.

For example, the East Coast grain belt is a powerhouse for duck production, evidenced by the daily bag limit of 50 mallards in CSI.

Befriend someone via popular social Facebook groups such as NZ Waterfowler to arrange a hunt somewhere new, or load up your decoys and try some of the duck filled public water options that abound on braided river beds, wetlands and lakes further afield 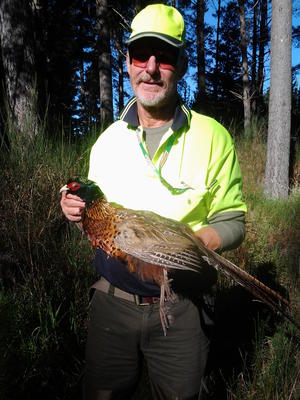 Bob S with a rooster from last years’ hunt.

The hunts are scheduled to take place on the Saturday morning of the final two public land pheasant weekend (23 June and 21 July).

Currently we have 8 blocks to hunt on the eastern end of the island, with some of them better than others for birds, depending on the stage of the harvesting cycle.

A dog is essential to hunt these blocks, so please only apply if you have a hunting dog to use.

Email your application to Jacob Lucas jlucas@fishandgame.org.nz, with your details, which hunt(s) you wish to attend, the name and registration number of your dog, and your gamebird licence number. If the hunt is oversubscribed, a ballot will take place with any hunters missing out guaranteed a place on the next hunt.

Registrations for the June 23 hunt close on Friday 8 June.