On Saturday, 17 July 2021, a weather bomb hit the northern end of the South Island and caused widespread severe flooding to most of the Nelson Marlborough region.

The big talking points were the Wairau and Motueka Rivers, our two most important lowland fisheries, with the Wairau reaching over 6000 cumecs - a 100+ year return event.

In the staff's opinion, there has not been an event that has caused such widespread damage across the entire region in at least a generation.

So, where does that leave us for the season?

There is no doubt this event would have had a significant impact on our fisheries. However, brown trout are a highly resilient species and have evolved with flood events.

So, while there will likely be less fish around, there will still be fish, and the populations will bounce back.

Places to perhaps concentrate on will be rivers that feed into lakes, as many fish use lakes as a sanctuary during flood events, with lakes also providing a source of lake fish to re-populate rivers.

Some rivers also ‘got belted’ less than others or are used to large scale flood events – so these might be good places to fish.

And this year may be a good year to fish lakes or high-country tarns – they all offer reasonable to excellent fishing and provide a nice diversion away from traditional river fishing, which many of us have become accustomed to.

If there is to be any good from this rain event, perhaps it may be through potential reversing of pool infilling which has taken place over the past decade or more in Nelson Lakes and other rivers within this region and have contributed to a notable reduction in trout habitat.

So, we hope you still get out exploring your favourite rivers; you might enjoy the changes to river morphology which will have seen new runs, riffles and pools created, and changes to what you’re used to.  There may be fewer fish around, but we could see some terrific fish caught again with more food to go around.

Above right: The Motueka Valley got hammered, but anglers have pitched in to help with the clean-up, working on farms of each side of the river shown here. 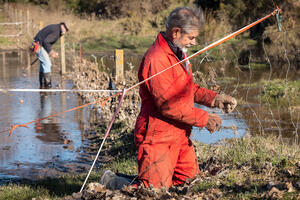 That same July flood not only likely caused significant damage to the fishery, but for many landowners, it was by far the largest flood event they had seen.

Flood water ripped through properties across the region, doing a good deal of damage to fences and property, and there were also stock losses.

A call went out to anglers and hunters to help with the clean-up, and there was a fantastic response from the Nelson Trout Fishing Club, who have since given hundreds of hours of their time to clear and re-instate fences within the Motueka catchment.

At the time of writing, six properties had been worked on, and there were more in the pipeline until the covid lockdown caused a temporary stop to proceedings.

We are often reliant on farmers and landowners for access to rivers. So it has been humbling to see such a fantastic response from anglers wishing to repay some of that generosity.

More farms will be worked on over the coming months, so if you want to join the movement and lend a hand, email Jacob Lucas here.

With the fishing season almost here, Fish & Game will be undertaking a release of fish into Lake Argyle and at Waimea Park in time for the new season.

The new family/adult pond will be ready to go, and fish will be released here and in the adjacent junior only ponds.

We expect to undertake regular releases to both of these locations over the course of the season, and there will also be a heli-release into the Branch/Leatham towards the end of this year.

Posted in Reel Life; Posted 10 months ago by Default Admin