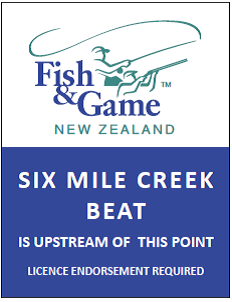 The Upper Wairau (above Wash Bridge) and Upper Matakitaki (above Horse Terrace Bridge) have now been designated as back country fisheries, which means a licence endorsement is needed to fish these waters.

Along with the Travers and Goulters Rivers, that means the Nelson Marlborough region now has four back country fisheries.

The fabled waters of the Upper Wairau have been under significant fishing pressure in recent years, and as a result, Fish & Game have introduced a voluntary beat system to help reduce angler conflict.

Above right:  Anglers fishing the Upper Wairau beat system should look out for these marker signs which indicate the start of a designated fishing beat.

It means that if you park at one of the designated car parks, you should have that run to yourself without fear of another angler dropping in front until the beat is completed.

There are nine beats in total, starting at Six Mile Creek and finishing at the Molesworth boundary at No Mans Creek.

The key to the beat system is for anglers to park at the designated car parks, and inform others of their daily intentions on their vehicle dashboard.

This will be made easier by 'GONE UPSTREAM' and 'GONE DOWNSTREAM' cards provided by Fish & Game, otherwise a note on the dashboard will do the trick.

It's expected though, that most anglers will fish upstream from the designated car parks.

New signage will be installed at the Six Mile detailing the individual beats, as well as at the start of each beat.

There is no beat system for the Rainbow River (from the confluence up), as well as above and below the designated nine beats, so normal angler courtesy applies here.

Ultimately the success of this system comes down to angler buy in, and although it’s only voluntary, we strongly encourage anglers to play by the rules for everyone's benefit.

If you want to fish the Upper Matakitaki through Mt Ella Station, please take note: public access has been closed for about one month due to animal health reasons.

Access to the river is still possible via Horse Terrace Bridge or other private land arrangements other than Mt Ella Station. We will let anglers know when Mt Ella access has been restored.

The 2016-17 Nelson Marlborough annual fisheries report is now online and can be found here.

The report has all sorts of info on what your Nelson Marlborough office has been up, to including the latest results from monitoring work (drift dives, spawning surveys and electric fishing), as well as information on fish releases, plus a heap more. 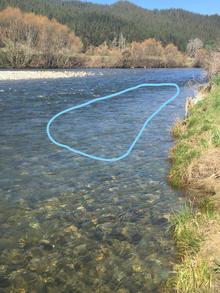 While the spring flush see many rivers flowing at boisterous levels, early season fishing on our lowland rivers can still produce the goods.

Staff have fielded numerous calls from anglers in the past month who have experienced some very good fishing on winter fisheries, with the Motueka in particular receiving the highest praise.

October and November is boom time for spin anglers.

High, often discoloured waters, provide ideal conditions to swing a dark coloured spinner across and down, or through slower boulder strewn areas which provide refuge for trout during higher flows.

During times of more normal flows, targeting ripples on sunny day with the fly rod has been successful using nymphs.

But decent mayfly hatches will still occur and trout will look to the surface too, making an exciting deviation from the commonly used nymph and indicator rig.

During times when the river is discoloured, it’s a good idea to target places where clearer flowing tributaries enter the main river. 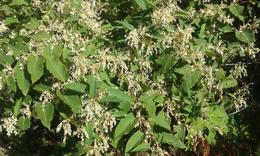 escribed as one of the world’s most invasive species, Asiatic Knotweed is currently present in small pockets in the Tasman region.

However biosecurity personnel in the region want to stamp it out before it becomes a bigger issue, and are asking anglers to keep an eye out for it.

River corridors are a favoured habitat for Asiatic knotweed, which is spread by soil and water movement, and, like other pest weeds such as Old Man’s Beard, is a real curse for the biodiversity of endemic flora.

To make it easier to spot, the plant has a distinctive white flower which appears from December through to April.

So if you happen across a plant or patch while on the river, phone TDC’s Biosecurity team and let them know.