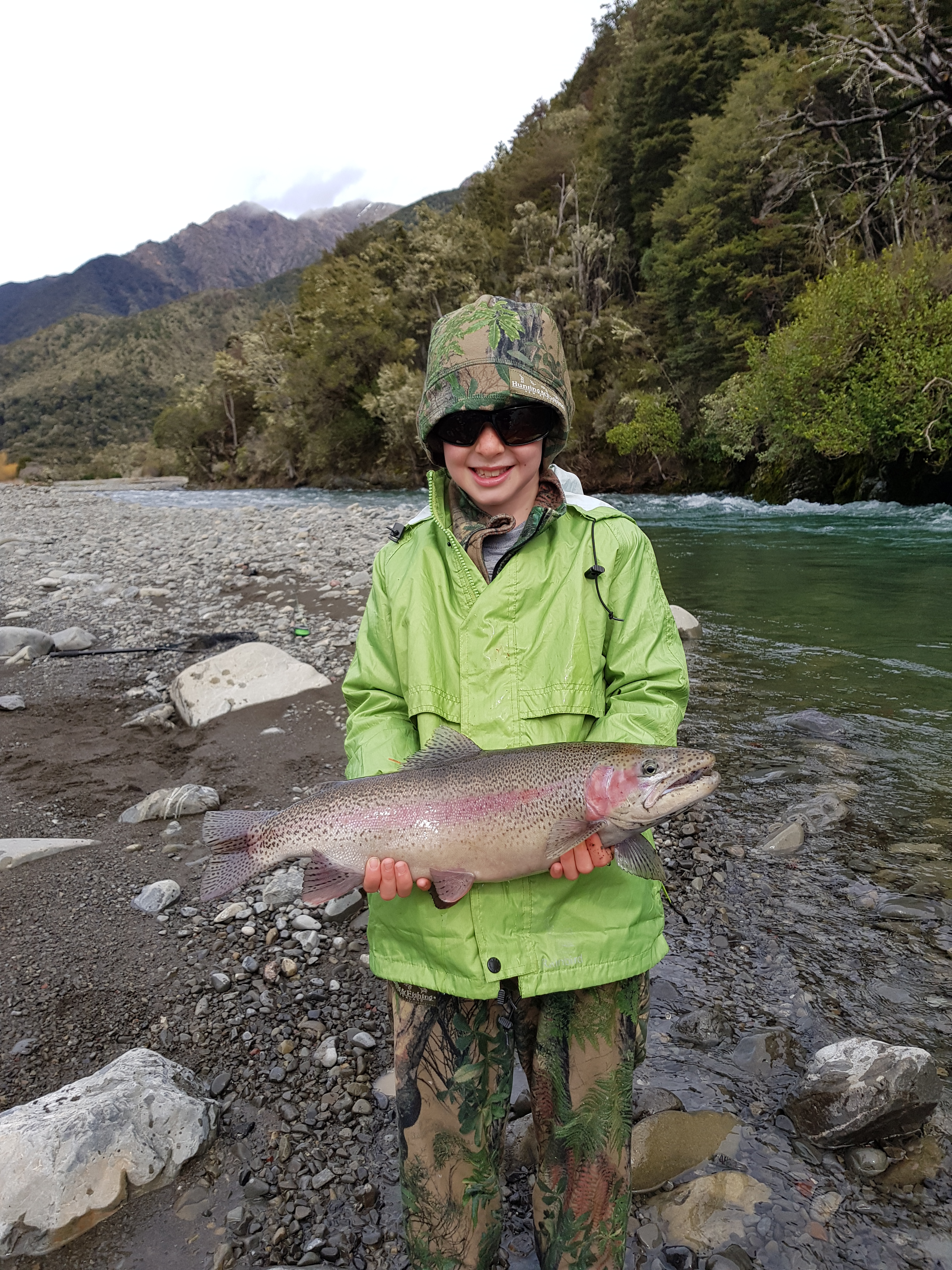 Nelson /Marlborough Fish and Game are pleased to advise that a mutually satisfactory agreement has been reached with Trustpower to alleviate the impacts of their power station on the Branch/Leatham trout fishery.

Fish and Game have long maintained that the existing fish pass has not, and never will, work to allow fish to pass up and down stream to an extent that will maintain the fishery.

Right: Pics like this of 7-year-old Remy Bourgeois with a large released rainbow trout are a great example of the successful Branch/Leatham releases.

The cost of building an alternative is likely to be prohibitive.

Also, questions of a minimum flow below the weir are not likely to be resolved to the satisfaction of Fish and Game.

Fish & Game became aware of the owner’s desire to sell the hatchery and that the future supply of fish could be jeopardised if any new owner was not interested in trout or salmon production.

Anglers will be aware of the recent trout releases being done over several years above the weir and most of these trout have been produced by Ormond Aquaculture’s hatchery at Wairau Valley.

To try to get a resolution, F&G staff and Marlborough councillors started thinking “outside the square” and decided to pursue an alternative solution based on an example in Otago.

After some detailed investigation and “number crunching” and with the hatchery owner’s agreement the following proposal was put to Trustpower as a way around the impasse.

Trustpower negotiated with the owners to buy the hatchery and establish an operation and maintenance agreement with F&G to produce fish for release into the Branch/Leatham to enable Trustpower to meet obligations under their resource consent.

Funding for the delivery of fish into the Branch and Leatham catchment is provided through this agreement.

After some months of deliberation, the Trustpower Board signed off on the idea and negotiations have been concluded to the satisfaction of all parties.

We believe this to be a “win/win” for all parties and F&G wish to acknowledge the willingness of everyone to reach a solution.

The recent releases into this catchment have been incredibly popular, and staff have been delighted with the level of interest from local anglers, fielding multitudes of glowing reports from a range of anglers of all age groups and skill levels.

All these factors will influence your trout fishing.

So, to maximise your chances of Spring success – consider fishing smaller rivers and streams and tributaries of larger rivers – they clear quickly after rain and often have a decent population of trout (further enhanced in early season as they can remain in these waters after spawning).

There are plenty of such waters around – if you’re unsure where to go look at a map of large river systems like the Motueka or Wairau and head out and explore some of their smaller contributing tributaries.

On larger lowland rivers, don’t worry about getting to the river too early – wait until the daytime temperature rises and fish during the middle part of the day.

The early mornings are brisk, and the water temperature very cold, so aquatic insects, and accordingly the trout, can take a while to kick into gear.

It also pays to look at river flows before you go, and Tasman and Marlborough Councils have up to the minute readings on many rivers.

For Tasman Rivers head to: https://www.tasman.govt.nz/my-region/environment/environmental-data/river-flow/

Lake Argyle will be closed for angling from 16 November to 2 December so annual maintenance can be undertaken.

This also includes the canals that enter and exit the lake.

Fish & Game will be on hand to carry out a fish salvage as the lake drains, and any remaining fish will make it into the residual pool at the dam end of the lake and will survive until the lake refills.