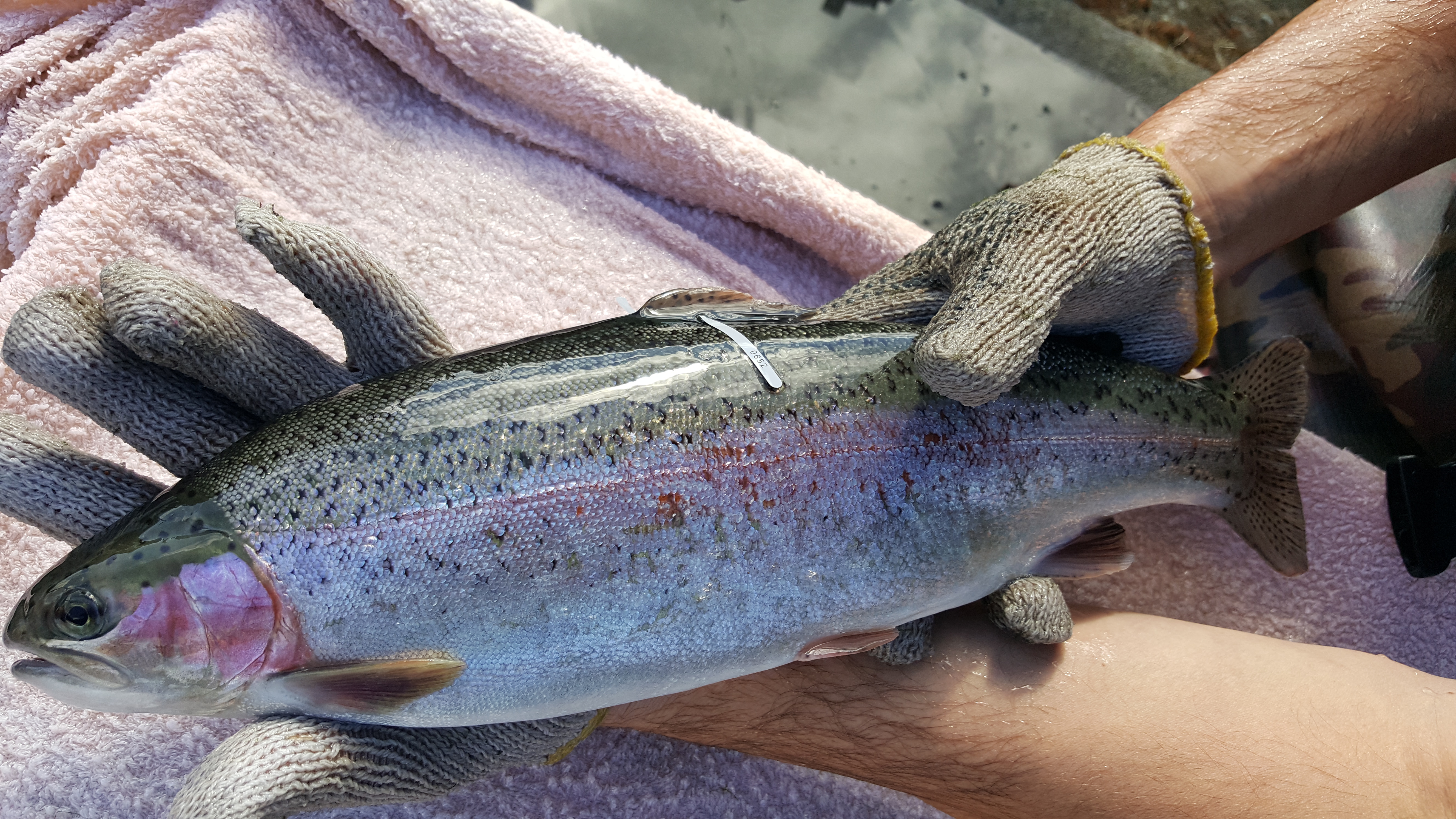 The releases carried out were funded by Nelson / Marlborough fishing guides and Owen River Lodge.

Four releases of 100 fish were carried out into the Taylor River, Spring Creek and two Pelorus tributaries.

Above right: 200 tagged fish were put into the Opouri River and an upper Pelorus tributary. The Spring Creek and Taylor River rainbows were not tagged.

The releases into Taylor River and Spring Creek were carried out to provide close-to-town options for anglers, in particular juniors from Blenheim who delight in the chance to catch trout in the Taylor River junior fishery.

The releases were praised by the Marlborough Freshwater Anglers Club.

Spokesman Barrie Clark says that both Spring Creek and the Taylor River are treasured by local anglers who recall previous times when they provided an outstanding angling experience.

"Our members are excited at the possibility of casting to rainbow trout in a waterway close to town.

"We also applaud Fish and Game for its great work in providing opportunities for the youth of Blenheim, who can now more readily enjoy success and learn skills out on a local river”.

Releases were also carried out into the Opouri River near Rai Valley, and the upper Pelorus tributary which have suffered from recruitment issues as a result of large flood events.

Putting one kilogram-plus fish into these waterways allows trout to bypass the high mortality rate that juvenile fish in these rivers experience. These fish are identified with coloured numbered tags.

Fish & Game is keen to hear from anglers who catch any of these trout.

“Fishing guides often cop a lot of flak from resident New Zealand anglers, however many  actually contribute to the management of the fishery resource through casting clinics, voluntary ranger activity, and more recently sponsorship of fish releases.”

Earlier in October 400  one to 1.5 kg rainbow trout were also released into the upper Leatham and Branch River catchments, funded by TrustPower as mitigation for the impacts of the Branch hydro-electric power scheme.

Staff urge existing licenceholders, or those wishing to give freshwater angling a try for the first time, to get out and make the most of these new fish, which should be slightly easier to catch than their wild cousins, and will make fine table fare.

With a period of settled weather, rivers are running low and clear - which means the drift dive season is now in full swing.

Spring Creek was dived in mid-November which saw a rise in rainbow trout as a result of fish releases carried out in June and August.

As a ground-fed river with stable flows, Spring Creek is free from flood events which is the primary population driver in rain-fed rivers, so survival should be high.

In this 1.3km stretch, 14 rainbows were counted all of which appeared to be in good condition. Averaged out over the course of the river, it could be projected that there is now a decent population of small to medium fish, now boosted further by a tanker load of 100 1kg fish at O’Dwyers Road and Hillocks Road, after the dive was completed.

There is a high likelihood that some fish will migrate downstream to build up the lower Wairau rainbow population – one of the release programme's other objectives. 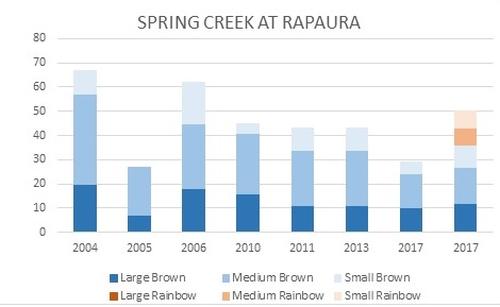 The Opouri dive was again disappointing with low numbers of fish seen.

None of the 767 fingerlings seen in last year’s dive have stayed around in the system translating to small-sized fish.

This is often the case for the Opouri and is attributed to both a high mortality rate from flood events and also downstream migration into the Rai/Pelorus.

Left: Rainbow trout are appearing in Spring Creek as a result of recent trout releases.

This is one reason why Fish & Game staff have begun a restocking programme in this river, which can support far more fish than are currently in residence (as noted with an incredibly abundant food supply on offer).

Staff hope the 100 ~1kg fish released into this river will be of benefit to anglers with another release scheduled for later in the summer, encouraging anglers to go out and target these fish.

Lake Argyle will be closed to the public on 9/10 December for a powerboat event.