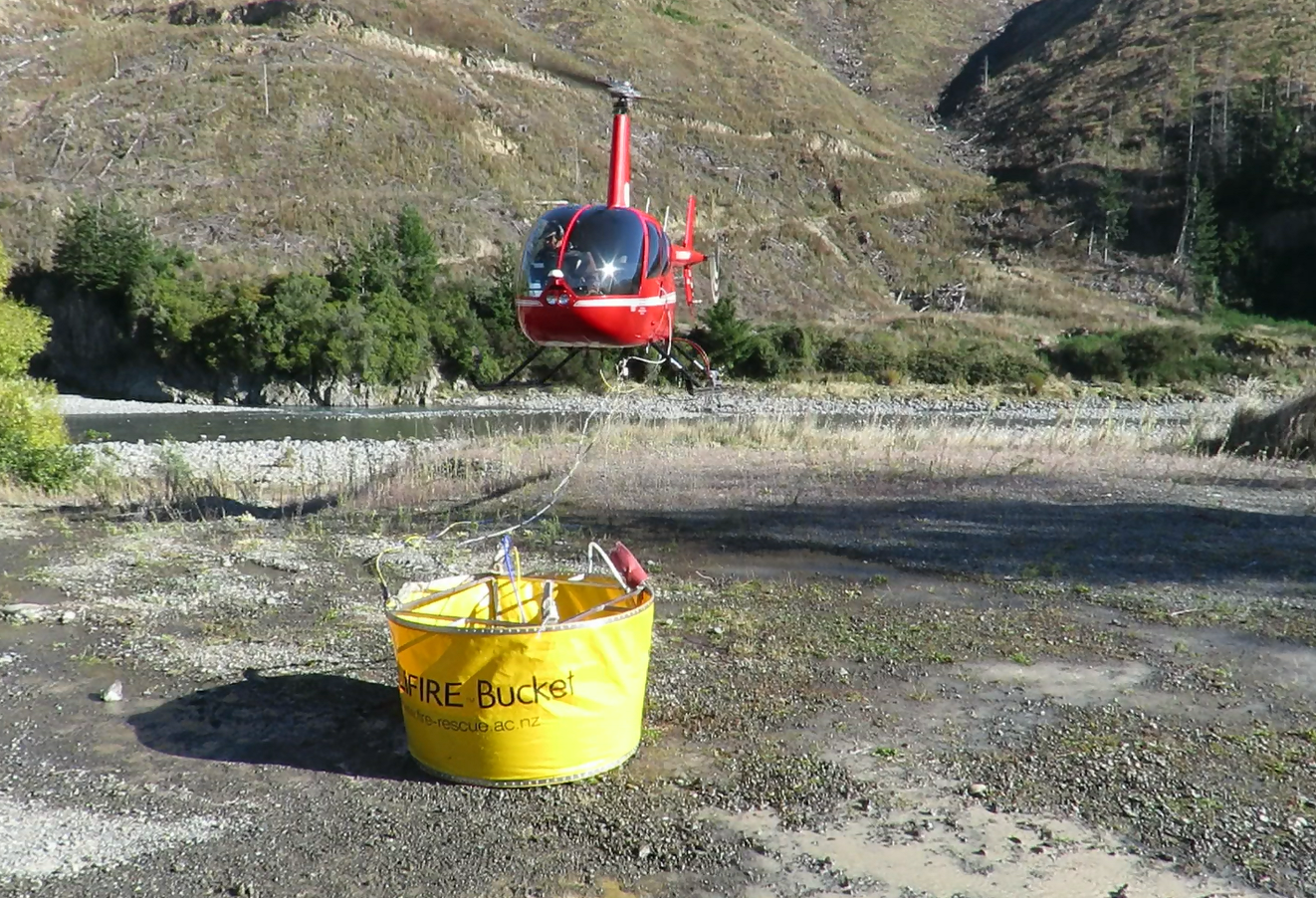 Motueka trout fishery on the rise?

The Motueka River is currently our river of second highest importance (the Wairau taking the number one slot) for the Nelson Marlborough Fish & Game region in terms of angler use.

It is a fickle fishery and at times can reduce even hard core expert anglers to utter frustration and accusations of a collapsed fishery being levelled at staff.

Above Right:  A helicopter was used to transport 380 rainbow trout into the Branch and Leatham Rivers.

The presence of seals visibly predating on adult fish during summertime also tends to raise the anxiety level amongst anglers over the long term health of the fish population within this river.

However feedback from anglers this summer over the state of the fishery was generally pretty good.

Periodic flooding meant flows remained high in spring and early summer, however there was still good fishing to be had when conditions allowed.

The high flows and lower than average temperatures meant algal growth was minimal, which made for sharp water clarity and excellent wading. 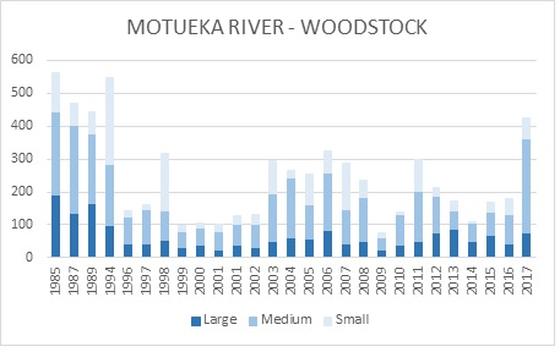 These positive reports from a number of regular anglers were also reflected in the results of this year’s drift dive data.

The longest running drift dive site is at Woodstock which had the highest numbers of medium fish since the late 1980’s, when the Motueka was at its best for recent decades – as per the graph on the left.

A similar increase in medium and also small fish was observed in the Motueka at Glenrae, and Motupiko, two critical small fish rearing tributaries for the Motueka.

It is likely that the stable spring in 2015 resulted in a very high juvenile trout fry survival rate, and this followed by the wet summer of 2016/17 (meaning lower than normal summer temperatures in the heat stressed lower Motupiko/Upper Motueka systems) has resulted in a very strong cohort of juvenile fish that will now contribute significantly to the Motueka brown trout fishery.

Fish & Game staff are therefore cautiously optimistic that this large cohort of small and medium sized fish will now translate into some of the best fishing we have seen on the Motueka for well over a decade – fingers crossed!

Trustpower have this year contracted Nelson Marlborough Fish & Game to facilitate and deliver the Branch/Leatham trout releases, as part of their mitigation for the effect the Arygle power scheme has had on the trout population upstream of the weir.

In April, 380 rainbow trout (1-2kg) were released into the Branch/Leatham River area at 6 different sites.

The day went very well, with the monsoon bucket system working flawlessly to deliver the fish, and all fish appearing to be in good condition on release.

In fact, a number of fish were caught by anglers after the release with the anglers commenting that the fish were still in good condition, although the fly of choice was once which most closely resembled processed fish pellets!

This will no doubt change as the fish adapt to their new wild environment and lock into natural food sources.

There was some initial concern after the Kaikoura earthquake that salmon would not be able to navigate through the altered river valley, and restrict upstream migration. 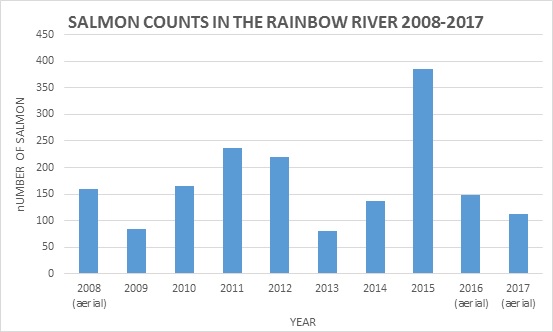 A number of dam walls, high velocity water barriers and canons on the Clarence River were a product of the earthquake, however reports suggest these eroded away to form a more natural river corridor by the time the migration commenced.

Aerial salmon monitoring was carried out on 8 May 2017 flying the Wairau/Rainbow and Clarence/Acheron Rivers.

The slower than normal fishing was reflected in this years’ counts with fewer salmon counted in all catchments this year, as shown in the graph on the left.

The Clarence and Acheron catchment still had reasonable numbers with 567 salmon counted and also confirms there were no major obstructions to the fish on their upstream migration.

It will be interesting to see if there is a better run next season.

This may well be the case as evidenced by record spawning counts in 2015 when 386 salmon were counted in the Rainbow catchment.

On average most of these fish return to spawn after 3 years at sea, so all things being equal, hopefully we hope to see an improvement in fish numbers this coming season.