As the days shorten and evening dew sets in, the night chirruping of crickets signals that autumn is well and truly here.

For the trout angler, April is still a fantastic month for trout fishing. Trout are actively feeding, packing on condition for the rigours of spawning ahead.

The other main drawcard is that you’re likely to have the river to yourself, a tempting proposition on some of our more pressured backcountry rivers.

Trout, as well as other aquatic native taonga, have been given respite from hot summer water temperatures that have been a mark of the summer gone, and which have certainly taken toll.

Prolific mayfly hatches feature in the autumn months and are a sight to behold.

Spending most of their life underwater clinging to rocks and stones feeding on algae, mayfly larvae rise to the surface at their time of maturity and break out into a winged dun, ready for their last few days on earth.

Trout, always in tune, respond immediately, and can be seen gorging themselves on the hapless insects, evidenced by dimples on the surface emanating from the spot where a mayfly once floated.

Keen fly anglers will be well versed on the importance of the mayfly to the trout’s diet, and should have a variety of imitations on hand, as mayflies, both adult and larvae, make up an important portion of the trout’s diet.

However bringing a fish to hand is far from a done deal, and while trout anglers will be captivated by teeming mayfly hatches, the fishing can be, at times, exasperating.

With so many naturals on the surface, your imitation can simply get ‘lost in the crowd’, or if your artificial fly doesn’t exactly match one of the 40-odd species of the moment, you may as well be fishing on the moon.

Brown trout can be notoriously selective after all.  If you get it right though – you’re in for a treat.

With just a few weeks to go until the close of the regular season, we encourage you to make the most of it.

Many of our rivers will be off limits to anglers at the end of April to allow the trout to spawn, however fear not, there will be still plenty of fishing opportunities on offer during winter, including Lake Argyle, the Wairau River (below Wash Bridge), and the lower Pelorus to name just a few.

For the very first time, the Rai River will be open for winter fishing from the Pelorus confluence to Carluke Bridge.

Four Golden Bay rivers were drift dived recently, including the Aorere River, which was last surveyed in 2012.

Low flows, which have been a feature of summer, meant the Aorere was confined and clear enough to carry out the work, and staff were pleased with what was in residence.

In 2012 when the Aorere was last dived, the river was still reeling from the devastating flood of 2010, which was one for the record books.

Not surprisingly this yielded the worst count on record.  This year the trout population is far more prosperous, with 80 large, 83 medium and 60 smalls seen in the 2km dive (above Devil’s Boots).

Above: The Aorere showing promising signs of recovering after the devastating flood of 2010.

While this is clearly a vast improvement, staff all were of the opinion that anglers would still have to work for success, as the key is to locate fish in productive run/riffle water more attainable to anglers.

As quite a number were seen in two of the very deep pools, these may potentially surface in the evenings and could take a spinner or fly fished near the surface.

The Waingaro, Takaka, and Anatoki Rivers were also surveyed, with fairly average returns for these rivers.

Lake Argyle is about to receive another population boost with a tanker load of 4-6 pound rainbow trout.

Anglers seeking more of a wilderness experience will be pleased to hear of another 400 large rainbow trout to be liberated into the Branch and Leatham Rivers, tributaries of the Wairau, in early April. 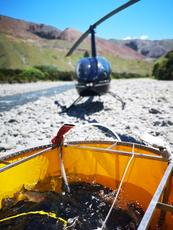 These fish are transported via helicopter monsoon bucket to the upper reaches of both rivers, and this is entirely funded by Trustpower.

The trout will be all sporting coloured tags with unique numbers, so if you catch any tagged fish, please inform Fish & Game.

At the time of writing the risk of fire remains high, so the utmost care must be taken when travelling through the roads.

Please pay particular attention to where you park your vehicles, and portable cookers or stoves should not be used unless you’re camping in a hut.

Fires are strictly prohibited under any and all circumstances so please do all that you can to reduce the risk.