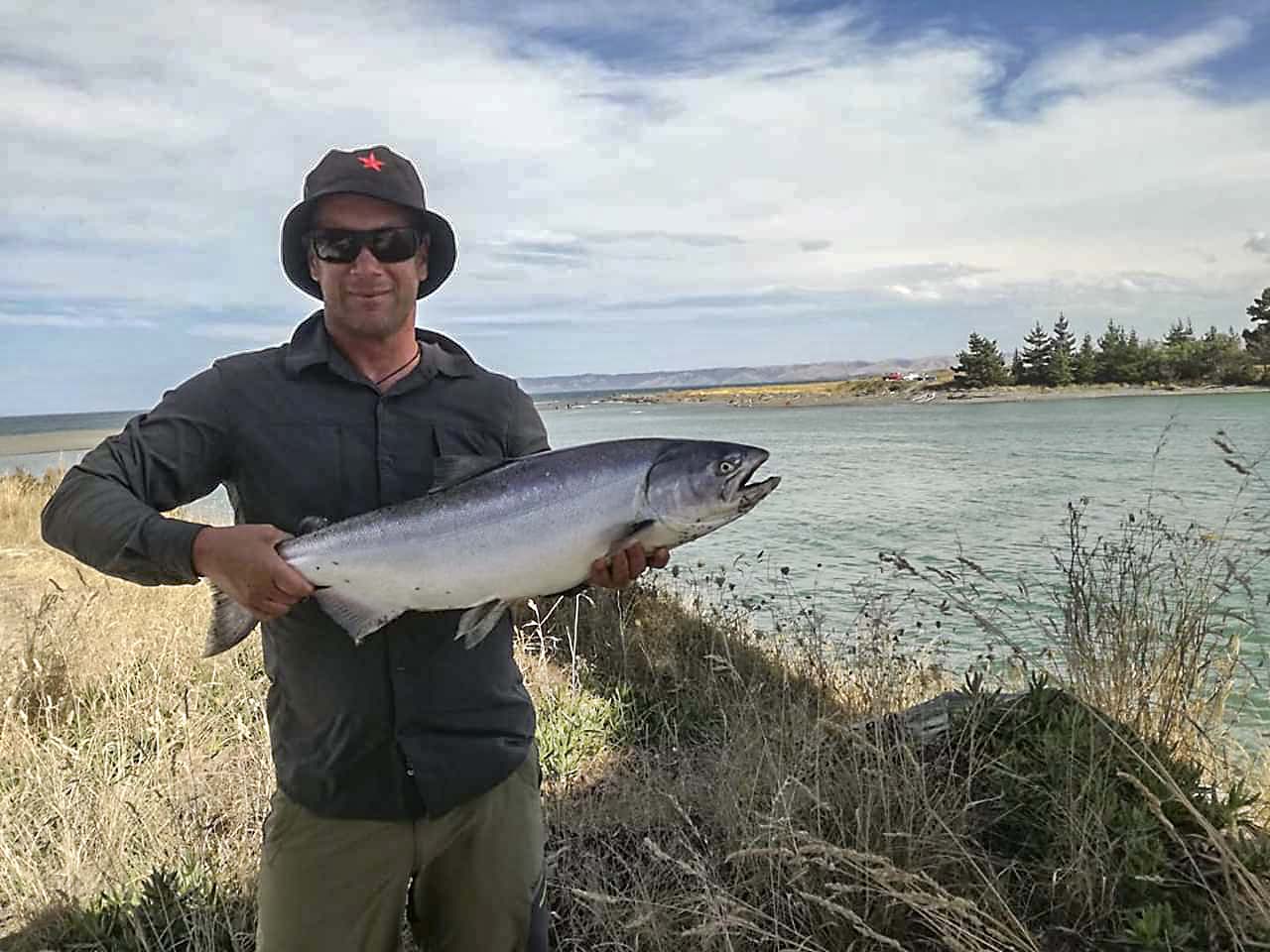 Salmon delirium has well and truly affected anglers in the top of the South.

Recently there has been a flurry of salmon caught at the Wairau mouth leaving some anglers very positive for the season ahead.

Due to the very dry summer, salmon have been congregating outside the Wairau mouth waiting for a rainfall event to trigger their migration upstream to spawn.

Recently there has been some very good fishing, with several fish caught around the 10kg mark – far heavier than your typical Wairau salmon.

Above Right: Dion Mckenzie with a 6.5 kg fish caught on his third cast at the Wairau Diversion.

Looking at the condition of these fish, it appears that they have been dining royally this summer, potentially on the abundance of krill observed, and are providing sterling table fare for local anglers.

It is thought the Wairau fish run the coastline from Marlborough Sounds through to Ward, generally within 10 kilometres of shore and often running underneath schools of kahawai which locate baitfish.

Prior to spawning salmon spend five to ten days around the river mouth in the mixing zone in order for their bodies to accept freshwater before they run up the river.

When rivers are low, as they have been, salmon are found even closer to shore than normal, and are more available to anglers at the mouth, hence why there has been good fishing here recently.

We have done some enhancement work in the past few years, and are keen to hear of any adipose clipped fish that you may catch.

Specifically, for this season these may be smaller fish in the two to four kilogram range.

There is also potential that some fin clipped fish may run up the Wairau or Clarence from the Lyell Creek enhancement work at Kaikoura, or potentially elsewhere.

So if you catch any fin clipped fish, please contact the Fish & Game office.

For those wanting some tips on how to catch Wairau River salmon, local Fish & Game Councillor and Ranger, Ben Sowry, has generously jotted down his hard won wisdom which you can read here.

Staff are in the middle of a busy drift dive campaign, making the most of low and clear conditions to carry out trout counts across a range of rivers.

Recently the Riuwaka was dived at three sites.

There were some reservations from staff about the state of the fishery, considering the devastating effect that cyclone Gita had on the mid to lower reaches.

Pleasingly, while the effects of this event still linger as evidenced by high sediment loads and pool loss, the trout population fared better than expected.

While there were fewer fish across the board this year when compared to last year, staff were still surprised to count 10 large browns in the lower site, mostly all in good condition despite the reasonably poor habitat quality.

The upper site at Moss Bush had lost a good deal of holding water and therefore contained fewer trout than normal.

All said, however, there is still a reasonable number of fish in the river, and reports from anglers have been positive.

The other good news from the dive is that around 50% of the trout seen were from the release carried out nearly two years ago, meaning the trout have adapted well to the river and even managed to survive the catastrophic flood last February. 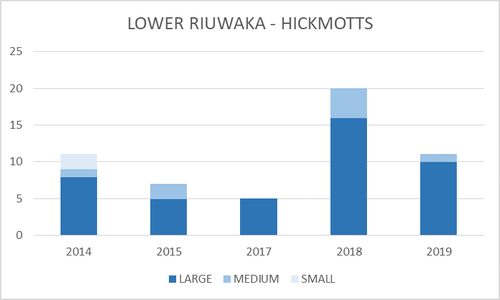 The Riuwaka fared better than expected, despite the effects of Cyclone Gita.

Winning tag still out there!

At the time of writing well over half of the tags have been handed in, yet the $500 Henderson’s voucher is still swimming around in the lake!

Anglers have until the end of February to catch the fish.

If the winner has not be caught by then, a random draw will be done from the tags handed in.

Staff have also heard of numerous double digit trout which have been caught at the lake. 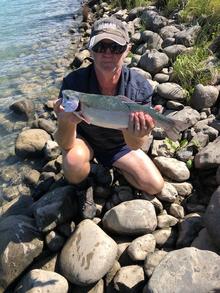 Many tags have been sent in, such as this by Murray Burbridge, but the winner is still out there!

A prolonged period of hot dry weather has seen many rivers drop to very low levels.

Many lowland rivers are reaching temperatures in the mid 20’s which can be fatal to trout if they can’t find thermal refuge in the form of cooler groundwater flows or cold tributaries.

While no significant trout fatalities have been reported yet, anglers are reminded to think about the health of the fish they return to the water if they practice catch and release.

During warm days anglers may find that trout hooked may be fairly lethargic during the fight, and there is a high possibility that the trout will perish after it swims away.

So, if you’re fishing a warm river it’s best to either get to the river early and knock off at morning tea.

Otherwise, seek out one of the many rivers that have cooler water, or consider not fishing at all until temperatures improve.

Luckily, we have been thrown a lifeline recently with a drop in night-time air temperatures cooling the rivers significantly, and there has been a small amount of rain which has propped up some rivers.

However, as long as Australia continues to bear the brunt of a heat wave, we should be prepared for more of the same.

Due to the popularity of Lake Argyle as a fishing destination, Fish & Game recently released yet another tanker load of 1.5-2kg rainbow trout into the lake and the lower canal.

More fish will be released there in the coming months.

A release of 130 rainbow trout (1.5kg average) was also carried out into Spring Creek.