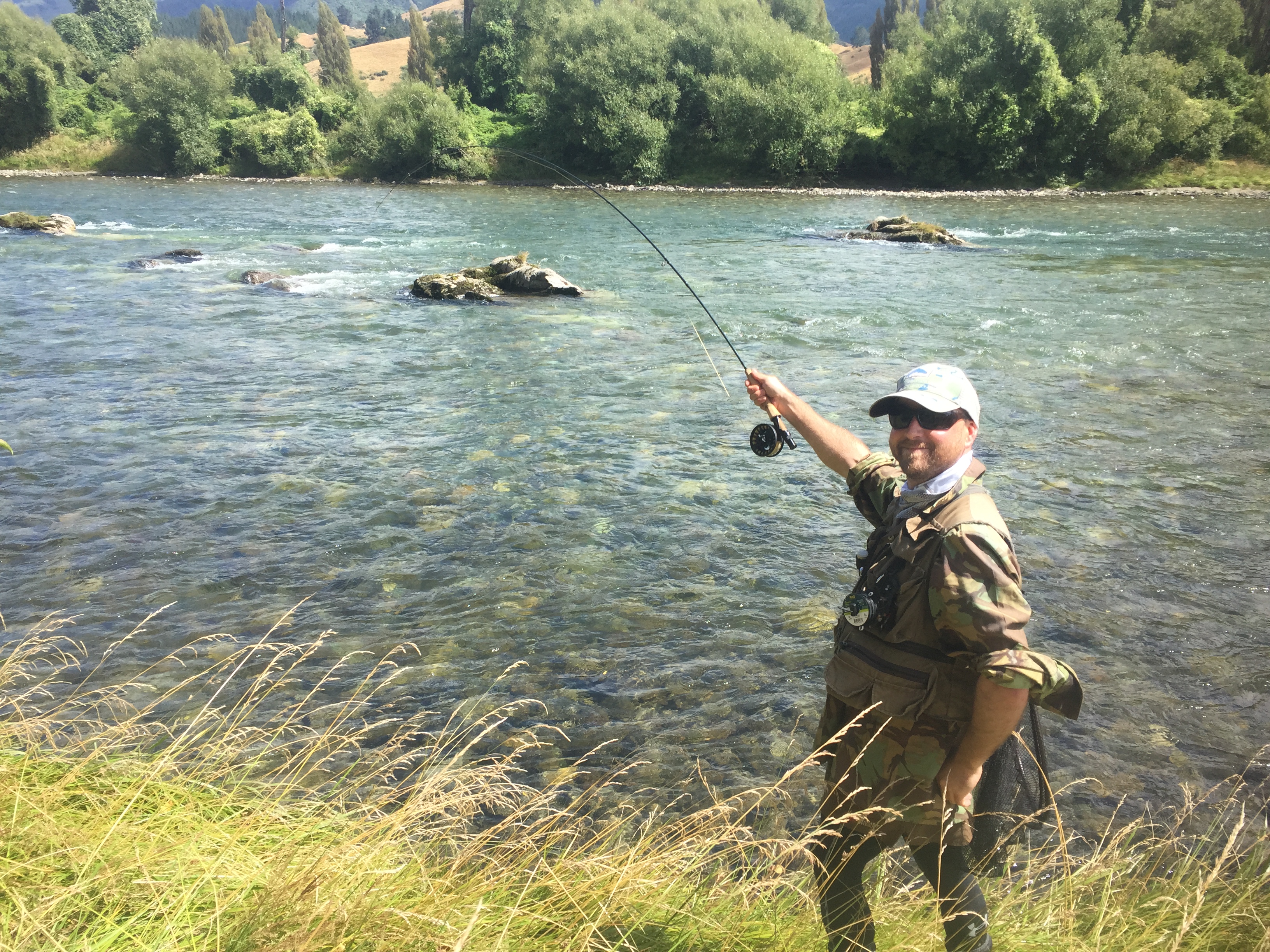 The reset button has been hit, and our rivers have received a much needed boost from recent rainfalls.

This could not have come at a better time for the region’s rivers, which were all suffering as a result of low flows and high temperatures.

Above right: Welcome January rain has refreshed the region’s rivers, perfect timing for the fishing months ahead.

Some anglers would have noticed trout feeding activity petering out after lunch, when the blazing afternoon sun took hold, and water temperatures reached a point where fish became stressed and feeding often halted.

For brown trout this is usually around 19 degrees, and 21 degrees for more thermally-tolerant rainbows.

Also, anglers would have experienced some fairly lethargic performances from trout once hooked, and perhaps noted the slow recovery time of fish they released, to the point where there is a far higher risk of the fish perishing after release.

With this in mind, in October Fish & Game deployed a number of temperature loggers in various tributaries within the Motueka catchment, including the mainstem.

It will be interesting to see the results of these when collected at the end of summer.

Staff were pleased to hear that some anglers, and indeed some fishing guides, were beginning their fishing days earlier and calling it quits when water temperatures got too warm, in order to not jeopardise the health of the fish.

So while the rain has done wonders for most fisheries, let’s hope the taps turn off for a while and the sun returns - to bring rivers to a heathy state - primed for good fishing.

For the angler, it’s a great time of year.  Many of you would have observed passion vine hoppers appear recently, which trout can become highly fixated on and provide excellent sport.

Cicadas too are out in force, and trout are dining lavishly on these chirruping protein packs, providing unsurpassed top water action. 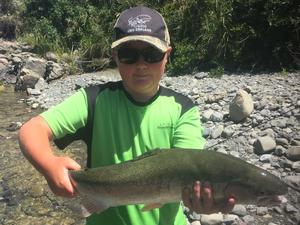 Recently 11 year-old Jack Bryan caught his first trout on a fly rod, all on his own.

Left: Jack Bryan caught this fish from an earlier release, which is clearly identified by its clipped adipose fin.

As it turns out this fish (which gave an excellent account of itself), was from an earlier release funded by Trustpower.

The trout was first spotted feeding vigorously in broken water and was a sucker for a hare and copper with a pink flash near the head.

After netting the well-conditioned five pounder, Jack went on to land another fish in the four pound range, using a woolly bugger stripped in an enticing manner within visual range of the fish.

The trout bore down on the lure and snatched it mere metres from the end of Jack’s rod – a sight that will no doubt be etched into his mind for years to come – before rollicking off downstream, tearing line off the reel with ease, until Jack managed to pacify the fish and slide his prize into the landing net.

In the past 12 months, Fish & Game has released well over 2000 large (1kg-plus)  fish into local waterways.

In addition, 4500 trout (125-320g) have also been released into a range of streams, mainly focusing on the Wairau and Pelorus catchments.

Many of the 1kg-plus fish are tagged, or have their adipose fin clipped, while the smaller fish have had a pelvic fin clipped (this is not always obvious as the fin can grow back, although usually not to the same size as the adjacent fin).

So, in order to measure the success of these releases we need information from anglers who catch or see tagged fish.

If you, the angler, are fortunate enough to catch any of these fish, we'd be delighted to hear about it – see table below for the details we're seeking.

This information is critical to ensure the release programme continues into the future.

On top of this, we also carry out targeted drift dives in all of the rivers where releases take place which can also give us an idea of their success.

Recently we were handed in a PIT tag by a West Coast angler.

This tag had been attached to a rainbow trout by Fish & Game staff before release into the Branch River on March 4, 2009.

On looking at the records we could see that this fish, at the time of capture, was caught in pretty much the exact same place it was released.

We could also determine that the hen rainbow was around 9 years of age – a decent effort for a trout in a volatile fishery such as the Branch.

As you will see by the picture the fish has seen better days; it looks as if the recent rigours of spawning have taken its toll.

But since that release in 2009, this fish would have without doubt, spawned many times, contributing tirelessly to what is now an excellent rainbow trout fishery.

The $500 Henderson’s voucher is still up for grabs!

At the time of writing the lucky fish has yet to be caught, and anglers are encouraged to keep trying to win the prize.

Due to the success of the Lake Argyle fishing promotion, another 200 large rainbow trout (untagged) have been released into Lake Argyle and the lower canal.

This was on top of 200 tagged fish released in December for the Lake Argyle fishing competition.

Fishing in the lake in the first half of January was somewhat hampered by flood events in the Branch River, which affect the clarity of the water in Lake Argyle.

Staff advise looking up the Branch River flows before heading to the lake to avoid disappointment: http://hydro.marlborough.govt.nz/environmental

The Rainbow Road is due to open for public access during the open season from 26th December to 2 April 2017 as usual.

Due to severe flooding earlier in the year, extensive repair work has been required and further work is still necessary to protect the road against future flood and earthquake damage in the New Year.

For this reason, the toll charges have been raised (see below), the first increase in many years.

This was necessary to continue the upkeep and maintenance of the road, and allow this unique opportunity for recreational users and the public to travel through a working high country station and enjoy its spectacular scenery.

Please also note that the road may be closed at any time with short or no notice due to changes in weather and environmental conditions, and will need to be closed in the event of heavy rain in the area.

The new toll charges took effect at the end of December 2017.