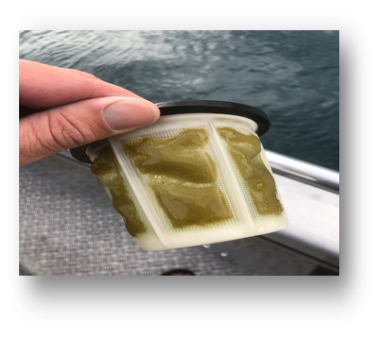 While you are enjoying NZ’s iconic rivers and lakes this summer, invasive and often microscopic pest weeds may be hitching a ride, using you or your equipment as a vector, to spread between waterways!

Stealth is the main way these freshwater invaders travel.

Right; Lake snow causes many annoyances like clogging up water filters as well as your fishing gear.

Sometimes a stream is infected but the pest isn’t visible yet, so unaware, we spread the organism somewhere else.

Just one drop of water on angling gear, watercraft or even a damp tramping sock, can be their way in!

Didymo has taken hold in the Cobb Valley, within the Kahurangi National Park and in the iconic Buller River, recognised by a ‘Water Conservation Order’ for its value to the region.

Fortunately many water ways remain unaffected and we are working to keep them this way.

Fortunately, these ‘sneaky buggers’ have not yet made it to the top of the South Island.

The 2017 discovery of Lindavia or ‘Lake Snow’ in many iconic southern lakes and Lake Taupo is concerning.

This pest algae forms a slimy brown to white mucus that hangs in the water column.

It sticks to water craft, swimmers, chokes up water supply and boat filters.

Decontamination test on Lake Snow have found it to be very hardy.

Imagine this pest in this region’s water supply or lakes, no thank you!

If you see something new or unusual in our lakes and rivers this summer, report to the Ministry for Primary Industries hotline, found at MPI.govt.nz

Right; so how do we stop these ‘sneaky little buggers’ from invading our patch?

Fortunately, the Ministry for Primary Industries has established a ‘Freshwater Partnership Biosecurity Programme’ aimed to unite interested parties such as; Iwi, Fish and Game, Department of Conservation, Land Information NZ and Regional Councils.

Since 2008, this programme has driven a national ‘CHECK, CLEAN, DRY’ campaign, encouraging individual freshwater users to take personal responsibility for stopping the spread of freshwater pests.

A dedicated  behaviour change is required, being to always CCD in between waterways.

Did you know there is a Freshwater Advocate for Nelson/Marlborough Region?

An integral part of the CCD campaign is riverside advocacy.

The role of Freshwater Advocates is to support, educate and motivate freshwater users to CCD in between waterways.

In essence, if you are travelling in between waterways, check and remove any pest weed matter entangled in your equipment, dry anything wet that may be carrying weed spores, then wait 48 hours before entering a different waterway.

If within 48hours, first clean equipment by soaking or scrubbing for one minute, with 5% biodegradable dishwashing liquid or 2% house hold bleach.

This should kill any pest weed cells or fragments.

Once you get into the habit, it’s easy!

I have some quick tips to make CCD even easier and as your Nelson/Marlborough Freshwater Advocate, will be travelling waterways this summer to help you to stay firm against those invading ‘sneaky buggers’.

If you spot me come and say hello.

See you out here! For further information see  https://www.mpi.govt.nz/travel-and-recreation/outdoor-activities/check-clean-dry/ 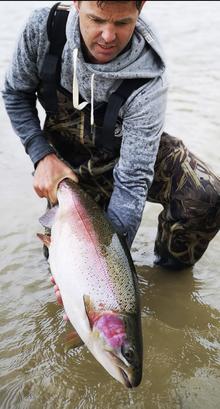 Some trophy trout have also been released into the lake.

200 tagged rainbow trout have now been released into Lake Argyle and there are some great prizes up for grabs if you catch one of the lucky fish.

We've also released some monster trout into the lake up to 15 pounds - but anglers should note the lake water is currently very dirty from recent rains and needs time to clear.