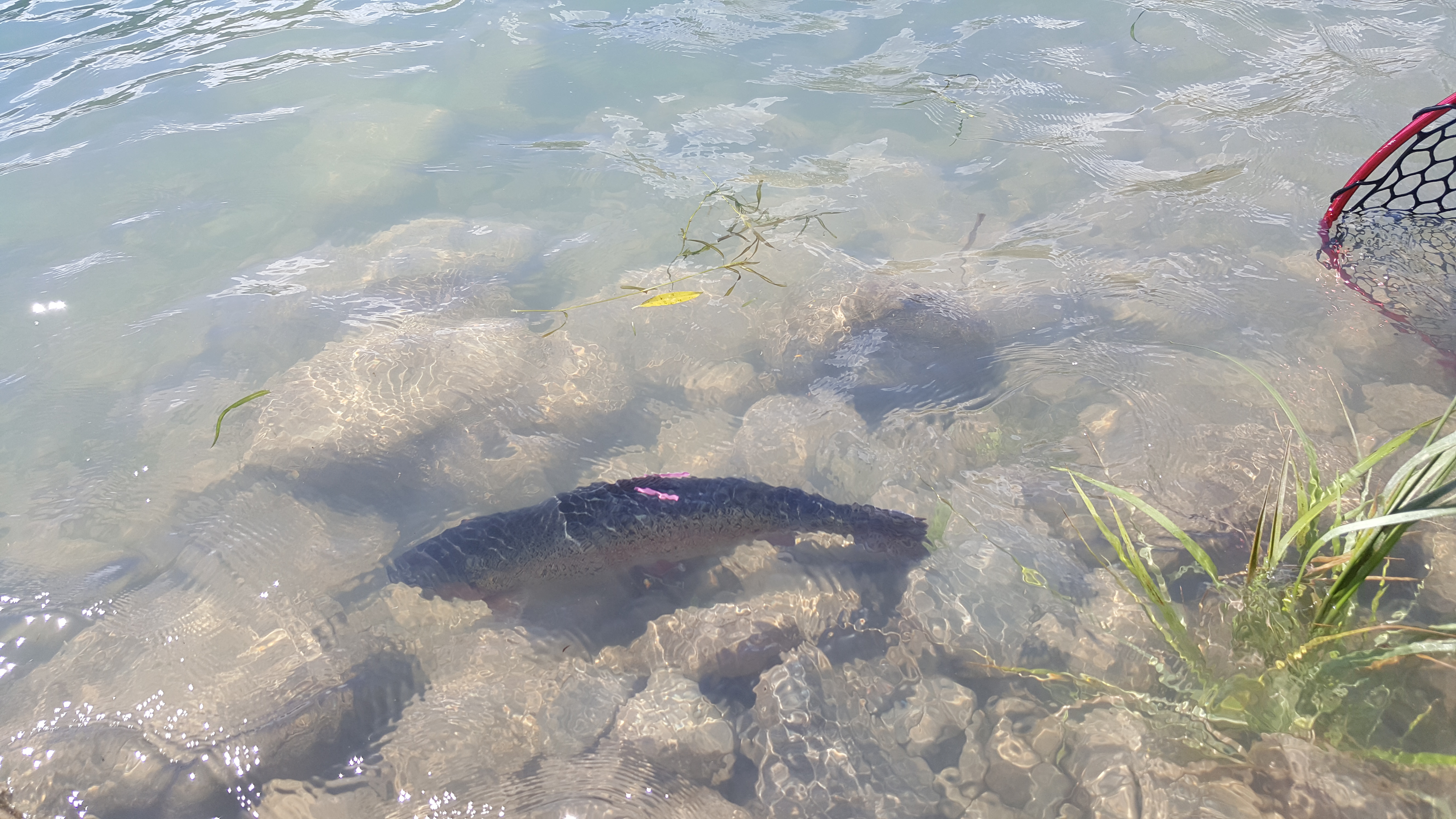 Catch a specially tagged rainbow trout and win a $500 voucher!

Two hundred tagged rainbow trout have been released into Lake Argyle and the lower hydro canal, but only one can win a lucky angler a $500 Henderson’s Fishing Store voucher.

Nelson/Marlborough Fish & Game manager Rhys Barrier says the release is timed with the holiday season to encourage families to head to Lake Argyle and have a go at trout fishing.

Above Right: 200 tagged rainbows have been released into Lake Argyle and the lower canal.

“This special release will inject some real fun and suspense into a day out fishing as excited family members look to see if every fish they catch has a tag that could make them a winner.

“All 200 rainbows are sporting visible orange or pink tags, but only Fish & Game staff know the number on the fish that will win the voucher.”

Rhys Barrier says “staff are excited to bring this opportunity to licence holders in the holiday season when Kiwi’s love to get outdoors.”

There will also be additional winners as anyone who catches other specifically nominated fish will win a free fishing licence for the 2018-19 season.

Rhys Barrier says there are no entry fees or forms to fill out but anglers must have a current fishing licence, of course.

An angler who catches a tagged fish needs to simply call or email Fish & Game with their tag number (and preferably a photo of the tagged fish) to see if they’ve bagged the winning fish.

“This release will significantly boost the population in the lower canal and we strongly encourage anglers, new or otherwise, to have a go at them.”

Lake Argyle is located in the Wairau Valley and is about 50 minutes’ drive from Blenheim and 90 minutes from Nelson.

The bag limit for Lake Argyle and the lower canal is two fish per day, and trout can be targeted with fly or spin rods, and bait fishing is permitted.

“This area is a perfect place to take your family fishing, with easy access and good numbers of fish” Rhys Barrier says.

“The trout are also superb eating, so if you find yourself hooked into one, don’t be afraid to take it home with you.”

While out and about drift diving over the last month, Fish & Game staff observed some positive habitat developments within the Upper Motueka and Motupiko, as a result of the use of rock groynes within erosion repair sites in these waterways.

Two sites were again drift dived within the Motupiko River, one at Newports (above Korere Bridge), and one at Quinneys Bush.

Left: This large rock groyne has created depth and structure – a real drawcard for trout.

While the upper site still holds a lot more salmonids due to the presence of crack willow creating a more stable confined channel with more pools, the heavily engineered dive site above Quinneys bush is now starting to also see a modest improvement in catchable-sized fish numbers.

This improvement is primarily due to Tasman District Council’s use of rock groynes as part of erosion repair work where possible.

These groynes sometimes create enough channel roughness to cause localised scour/pool formation, and catchable fish have been observed at some of these sites.

The deeper water creates cover, but also most importantly ‘thermal refuge’ in the form of localised cool groundwater seepage, which is critical for salmonid survival in the lower Motupiko over summer months.

Interestingly enough, groynes with small tree willows growing adjacent to them, also held large numbers of native dwarf galaxiid fry, so it's not just the salmonid fishery benefiting from this approach by council.

A dive on the Upper Motueka River at Glenrae also revealed how beneficial these groynes can be, with a three metre deep pool created by two groynes (pictured) at the bottom of a 1km drift dive holding 11 medium and large brown trout. Not bad, considering only 28 in total were counted over the entire dive.

Whether all these fish remain within this system as flows recede and temperatures increase remains to be seen, but we intend to re-dive this site once flows hit the current 1400 l/s rationing trigger for this waterway at Glenrae, which Fish & Game believe is inadequate to properly protect this part of the Motueka fishery. 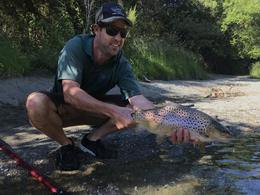 100 tagged brown trout have been released into the Wairoa River in an attempt to provide some ‘close to town’ river fishing options, as well as boost trout numbers in this river.

Some of the fish are superb specimens with a many in the 2-3kg range.

Right: Some superb brown trout have been released into the Wairoa River.

The trout are tagged with orange or blue tags, so if you catch (or even see) any fish, please inform the Nelson office.

Tag returns are an essential way we monitor the success of our releases, and if we don’t hear from anglers future releases into these waterways may not occur.

The Wairoa River can be reached via Brightwater by turning onto River Terrace Road and then onto Wairoa Gorge Road.

Most of the fish have been released in the upper section of the river with the expectation that these will spread out over time.

Fish out ponds open to public

The Waimea Park junior fish out ponds are now open to junior anglers 17 years-old and under.

The young anglers must hold a valid fishing licence (free for kids under 12).

There are good numbers of rainbow trout in the ponds as well as some brown trout from an earlier release.

If there's anything to be gained from the recent run of kids fish out events, it is that trout flies, particularly large olive green lures such as the woolly bugger (which are a dead ringer for the abundant damselfly larvae), have been working well. And the good news is they can be fished with both fly and spin rods.

Of course Jimmy’s Baits are an excellent option too, particularly when fished with just a small amount of weight and no bubble.

Click here for some handy hints from Jimmy - guide extraordinaire and the man behind Jimmy’s Baits.

After a number of months out of action due to a major flood event, the Acheron Bridge has now been fixed and is open for vehicle access.

This means anglers can now access the Acheron River via Hanmer as well as the Awatere Valley.

Access to Molesworth Station via Rainbow Road is scheduled to open to the public on 26 December.

There is a charge per vehicle, which has now been increased to $40, and is to be paid at the Old Rainbow Homestead.

Four-whee drive vehicles are recommended for the trip through to Molesworth as there is the occasional section of road where decent clearance is required.

Happy Christmas from us!

From the team here at Nelson/Marlborough Fish & Game, we hope you have a safe and enjoyable holiday break, and we look forward to seeing some of you out on the water soon.