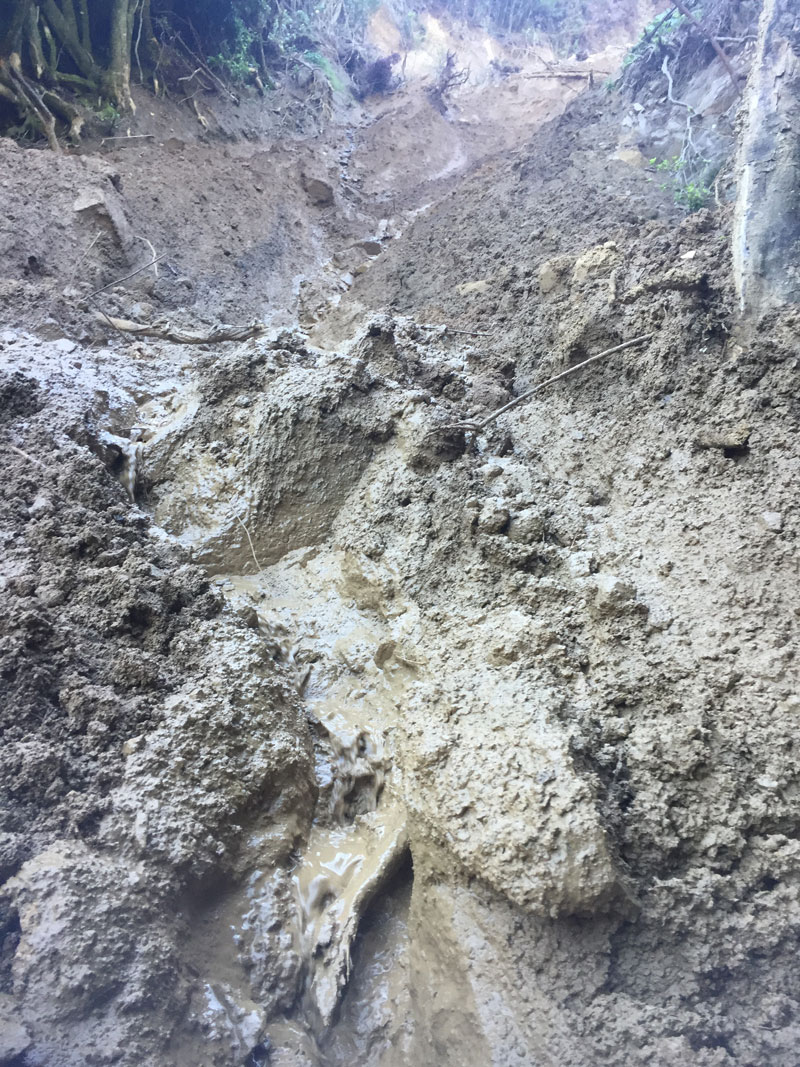 The Kaikoura earthquake had many impacts far and wide, however Fish & Game could not have foreseen the effect this quake would have on the Riuwaka (Riwaka) River.

The quake triggered a large slip in the south branch, and caused the river to colour up for months afterwards.

In March, staff made an attempt to locate the source of the sediment leak based on information gained from two local pig hunters.

Right:  The Kaikoura earthquake caused a major slip in the south branch of the Riuwaka River.

The slip, about 80m long and averaging 20m in width, was easily located about an hour’s walk up the south branch past the carpark, and further up a side stream.

At the time, muddy water could be seen pouring into the south branch where the effected side stream entered, causing the river to remain dirty for its entire journey to the sea.

During the visit, large amounts of liquefied clay soil was mobilising and pouring into the stream despite the last rainfall being three to four days earlier.

This is of some concern to the health of the river as it may take some years to stabilise.

A patch up job was done to divert the clay-laden water to a natural sediment trap, which seemed to do the trick, with water clarity in the south branch improving almost immediately.

A few days later the mainstem river, previously the colour of porridge, had sufficient clarity to be drift-dived.

Staff may look to further remedy this slip if sediment issues continue by using sandbags to divert the water to the sediment trap, and potentially planting grasses to speed up the stabilisation.

The timing of the slip was unfortunate, especially as a release of 150 tagged brown trout has been carried out.

However angler feedback, as well as our findings from drift dives, has shown most of the resident fish to be in good condition despite the turbid nature of the water. 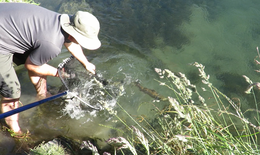 Fish & Game released 50 rainbow trout into the Taylor River to coincide with the April school holidays.

The fish were grown and delivered by North Canterbury Fish & Game, and have been released into the Taylor junior fishery, which is defined as the area between Hutchison Street Bridge to the Opawa Loop confluence.

Feedback from young anglers from the past two releases has been positive, with some massive rainbow trout caught as well as some solid browns.

The Nelson Marlborough Fish & Game region has no "controlled fisheries," meaning there is no way an angler can reserve a section of river for themselves.

This reminder comes as a result of feedback from a concerned angler, who was apparently misled by another angler claiming they had the rights to fish a section of river.

This is simply not the case for anywhere in the region.

The only example we have n New Zealand of anglers booking sections of a river is in the Otago Fish & Game region for the Greenstone River for the months of February and March, when angler days are at their peak.

While most anglers love solitude while fishing, there will be times when anglers make contact with others on the same stretch of water.

While this is not ideal, all licenced anglers have equal right to fish any of our rivers.

Fishing guides, for example, have no more right to a river than the average weekend hero wetting a line on their day off.

However there is an angler’s etiquette to uphold.

If you happen to bump into another angler, respect those who are already on the water before you; politely enquire about their plans, and come to an arrangement that works for both parties.

This may mean a decent walk for one party while conceding some water for the other.

Most of all, stick to any arrangement made between parties.

If you encounter any issues in regards to angler etiquette, we would be interested to hear about it as soon as possible after the event.