Summer has well and truly arrived; the blazing sun has rapidly browned the earth and lowered the rivers to a great level for fishing.

After a tough Spring where periodic rain kept rivers high and anglers confined to home, it is now a magical time for those casting a line, and from what we are hearing, there have been some pretty good fishing.

Thankfully, the high rainfall leading up to Christmas has meant the rivers still have good flows and reasonable temperatures for fishing, however, keep an eye on the water temperature as the summer progresses – if it starts getting too warm and you’re practising catch and release, it may be better for the health of the fish if you start earlier and knock off in the early afternoon.

The early season rainfall meant we couldn’t complete as many drift dives as we would have liked, however, rest assured staff will be donning wetsuits regularly over the coming months to monitor the trout population in many rivers.

In early January the Opouri River was surveyed, with a respectable total of both large brown and rainbow trout – plenty for getting anglers excited about!

Other recent rivers dived include the Kaituna & Motupiko. 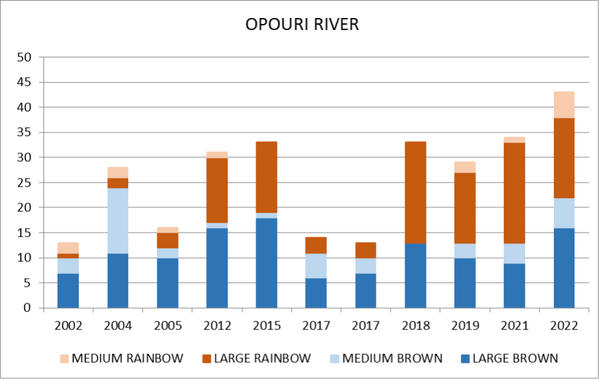 Above Right: Kaiva Paaka with a chunky Motueka fish, caught on the fly all on her own.

Anglers will be pleased to hear Rainbow Road is currently open to all vehicles between Tuesday 11 January and Monday 7 February 2022 for travel between St Arnaud - Hanmer and Hanmer – St Arnaud.

If you have any questions, email duncan@nelsonhoney.com

The Blue Glen Road Public Access Easement into the Motueka Gorge (and Mt Richmond Forest Park) will be closed from mid-January 2022 for a period of 4-6 weeks while OFO (OneFortyOne Forest Management) replace the ford with a bridge.

Anglers can still enter the river at Jansen's Bridge and fish upstream during this period.

Lake Argyle will be open for fishing over February, however, there will be no inflow of water into the lake from the Branch River and no electricity generation until work is completed on the new infiltration gallery at the dam weir.

Anglers going up the Branch Road will have noticed the considerable works currently underway, which has the aim to be able to take water during high flows without bringing in sediment and gravel into the system.

Trustpower will keep the lake high during this period, so the lake is still usable for recreational users.