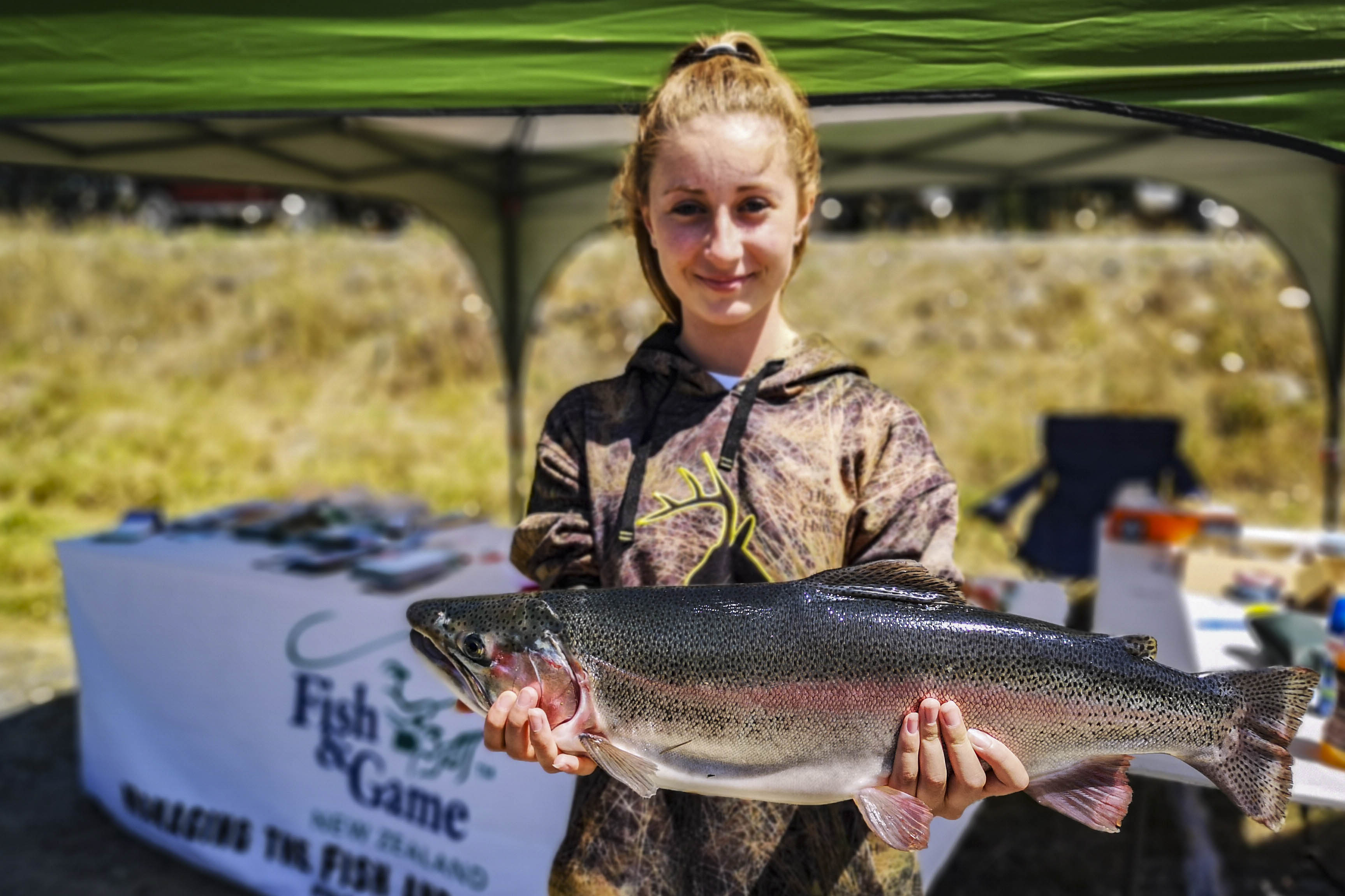 On Saturday Fish & Game held their inaugural family fishing day at Lake Argyle, a day for new and learning anglers to come up to the lake and learn about how to catch fish there.

Around 250 people turned up, meaning the lake was the busiest it probably ever had been.

The morning started off with a few early arrivals throwing lures into the water, with a few rainbows caught.

Right: While fishing was tough going on the day, some nice fish were caught.

This was followed by a fish release where the punters witnessed some monster trout getting released – some of them up to 15 pounds which received plenty of oo’s and ahh’s from the crowd.

Spot prizes were dished out, with many participants walking away with a brand new rod/reel combo (courtesy of sponsorship by Handerson’s Ltd), plus some other great prizes.

The group were then set free to fish the lake, armed with their rods, and plenty of lures supplied by either themselves or by Fish & Game.

The most popular rig was the ‘mousetail rig’, which voluntary guides were tying on frantically through the day.

While the fishing proved to be tough, the enthusiasm shown by all the anglers was impressive, and goes to show that there is genuine interest in trout fishing in this region.

During the week prior Fish & Game staff released nearly 500 rainbows into the lake, and a further 250 into the lower canal, so it’s fair to say the fishing will be going off at Argyle for the next few weeks, and we encourage licenceholders to get up there.

A special thanks goes to co-organiser Renwick Department of Conservation; Henderson’s Ltd for their generous sponsorship; Trustpower for the facility and funding towards fish releases; and to the voluntary fishing guides and Fish & Game Councillors who gave up their time to help on the day and pass on their knowledge to the new anglers. 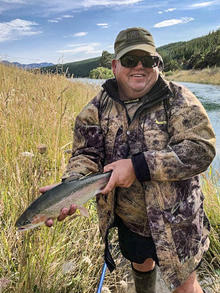 Jimmy Campbell caught himself a tagged fish in the Argyle canal.

The Lake Argyle tag competition is in full swing and we have our first main winner, with a local angler catching one of the two lucky fish, netting him a $500 Henderson’s voucher for his efforts.

Over half of the 200 tags have been handed in so far, and there is still a $500 fish swimming in the lake, along with some other great prizes.

We have also given away a cracking new Okuma rod/reel combo to a gentleman who caught his lucky fish on a rod well past its use by date.

The winner of the new rod and reel was absolutely stoked when he found out he’d won some new gear.

Summer is well and truly here, and after a turbulent pre-Christmas period the region has strung together day after day of sunshine and fine weather.

Currently rivers are in good shape, though getting lower by the day, and, in general, water temperatures have been optimal for fishing.

From what the writer has seen, trout are in excellent condition and are looking up, down, left and right for food, and are pretty eager to take a well presented fly or softbait. 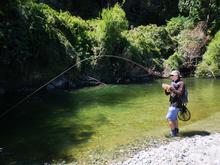 The sun is out and the fish are on the chomp, Warren Holm into a Motueka brown trout.

We encourage spin anglers to fish the bubble and fly technique, as spin fishing generally becomes less effective in rivers over the coming months.

Fish & Game have produced a pamphlet on how to fish this technique which applies brilliantly to larger lowland rivers, especially prospecting the ripples and runs.

Tying on a heavy fly with split shot and a smaller fly off that means you’ll also be able to prospect the deep fast moving gutters where larger fish often tend to lie, and which are difficult to fish with a floating fly line.

Fish & Game have developed an information pamphlet on this technique which you can download here.

Fly anglers will note the emergence of passionvine hoppers which the trout simply go nuts for.

Cicadas, too, are not far off, and fantastic top water action is on the cards fishing these, fishing sighted or blind.

If fishing blind, consider tying a small dropper not too far from the cicada fly.

If the fish doesn’t like the look of your cicada on closer inspection, more often than not it will grab the trailing nymph.

On another note, it has been pleasing to hear of decent fishing in the Branch/Leatham catchment, despite the belter of a flood that ripped through the catchment in early December.