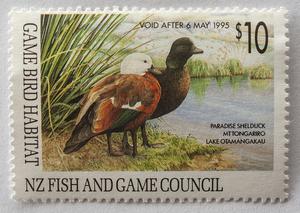 The selected game bird species to feature in this first photographic competition is the paradise shelduck.

By chance, rather than design, the paradise shelduck was also the first species to appear on the Game Bird Habitat Stamp when it was launched in 1994, it featured again in 2004.

Your entry must be submitted digitally via the Fish and Game website.  No other forms of entry will be accepted.

Entries for the 2019 competition have now closed

Although the competition winner  has yet to be announced, the next game bird species to feature is the NZ Shoveler (spoonbill).

This will become the species for 2021’s game bird habitat stamp.

A panel of Judges will select images based upon technical quality, plus the aspect and background to the subject bird.  The ideal shot will be of the nominated species at home in the sort of natural environment where it will thrive.  Judges will look for diversity, originality and creativity of the composition. Judging will be anonymous.

The decision of the organisers is final and no correspondence will be entered into concerning the competition’s judging and organisation.  Once the winner is announced, all ownership rights to non-successful entrants will return to those entrants.

Preparation of habitat stamp & its release    Winning entry will be submitted by the New Zealand Fish and Game Council to NZ Post by mid November 2019.  The image will feature on the Habitat Stamp to be released February 2nd 2020.