The upper section of the Ohau River from its confluence with Lake Ruataniwha upstream to the Lake Ohau weir is the Central South Island Region’s only backcountry and controlled fishery.

The purpose of the backcountry and controlled fishery is to manage angling pressure to ensure that the fishery’s high-country aesthetics and high levels of angler satisfaction are maintained during the early-opening “Spring season” that was established in 2018.

The Spring Season is made possible through flow restoration and spawning enhancement provided by Meridian Energy. To learn more about the history of the Ohau River Spring Season click here.

All anglers who fish the (upper) Ohau River must obtain a backcountry licence.

Note: A Controlled period applies on the Ohau River backcountry fishery during September and October 2022. Please refer to the Controlled Fishery information page for further details.

Method: Fly and Spin only.

Reach: The designated backcountry reach is upstream from the river’s confluence with Lake Ruataniwha to the Lake Ohau weir.

Access: All access points to the river requires driving on gravel roads. Access to the uppermost section at the Lake Ohau weir via Glen Lyon Road and the river’s mouth area via the Ohau A Power Station Road are usually passable by all vehicles. The gravel road that follows the true right (South) riverbank, starting at the Ohau Weir, skirting the river and Lake Ruataniwha and ending near the Ohau B Canal Bridge on State Highway 8, generally requires a high clearance 4WD vehicle to access and is not recommended for cars.

Central South Island Fish and Game will be monitoring compliance on designated backcountry fisheries during the season.

Non-compliance with the backcountry licence and controlled period licence requirements are offences under the Conservation Act and subject to maximum fines of $5000.

CSI Fish & Game looks forward to your cooperation in the management of these fisheries, and we encourage you to show courtesy and respect to one another.

There is a major nesting colony of the threatened black-fronted tern on an island about halfway up the river. The birds are actively nesting from late September through the October period (and beyond) and they will aggressively dive bomb anyone who comes close. If you encounter this behaviour, please move on, and do not cross to the island. Drones are not permitted to be used in this area. 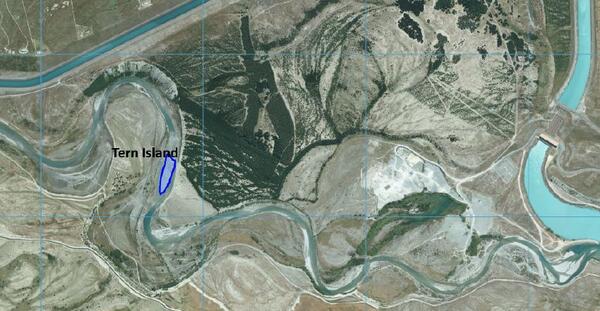 Prevent the spread of freshwater pests

Please click here and read the important information provided on doing your part to prevent the spread of freshwater pests.