Praise for hunters who ‘stuck to rules’ at opening 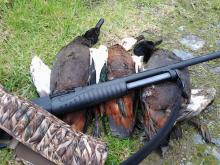 Everyone checked was in compliance with licences, bag limits, and the use of steel shot, a pleasing result.

Right:Opening Weekend provided many hunters with opportunities to provide a feed for the family.

One warning was issued to a group for having an extra shotgun sitting in a corner at the back of a maimai which they claimed was a backup gun.

They were told that the gun should be in a case and not readily available if it was intended to be a backup.

Police officers did strike some issues that they had to deal with. They found un-attended loaded weapons in vehicles (some with keys in the ignition!).

There were also some issues with alcohol where Police gave warnings (two people blew well over the drink drive limit).

Tips for targeting ducks from now on

With the Opening Weekend’s warm and calm weather, waterfowl hunting was slow but bags were around four to five mallard/greys per person, with a good number of hunters shooting their limits of shoveler in certain areas.

Reports from hunters indicate that after Opening Weekend hunting continued to be good in the morning, but slowed down as the day warmed.

To get some more duck hunting in hunters need to do a little homework. Scouting around to see where ducks are congregating is the best way to improve your hunting opportunities.

Spend time watching the morning and evening flights to determine where the ducks are heading. Once found and you get access, set up prior to the duck flight and enjoy some good hunting.

As well as ducks, there are plenty of chances to shoot pheasants and quail on the river beds. Hunting pheasants on these beds also allows for you to scout for duck camps in the river, and provide you with some exercise as a bonus.

Right: Hunting for pheasants along the river allows hunters to scout for duck camps.

Send in your band details – and win