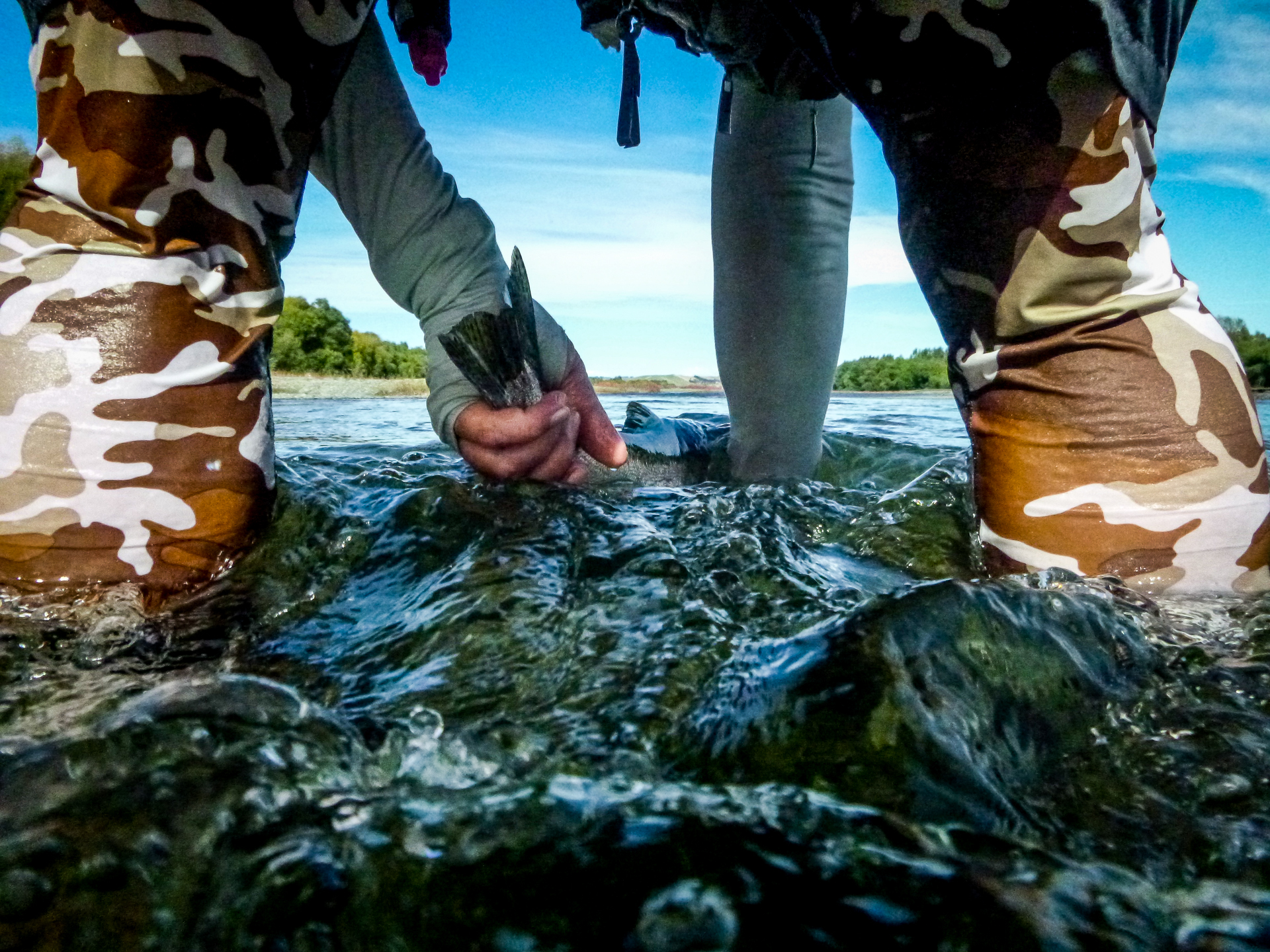 It’s another year gone by; a great season was had by many Hawke’s bay anglers in 2019.

The gem of the season had to be the Tutaekuri, it held a steady flow for months at a time when many other rivers became unfishable you could turn to it when needed somewhere to fish.

Even now the lower reaches will continue to produce.

Above Right: Released back into the Tutaekuri.

Opening day was wild to say the least.

The weather gods were not too kind on the days leading up to the 1st.

However the rain was relatively short in the headwaters, so most of the Tributaries stayed clean and allowed anglers to still sight fish in some of their favourite rivers.

Levels were a little higher than normal which the trout greatly appreciated.

The day was clear from morning until mid-afternoon where an almighty storm bust out of the mountains.

Heavy hail, lightning and heavy rain hit at 3.30pm forcing many anglers out due to dangerous conditions.

It was the worst one I have seen in many years.

Maraekakaho road was covered in three inches of hail and lightning bolts were hitting all around me.

Exciting to say the least.

The rivers are looking to be in good health , with fish stacked up to the max in most pools feeding away happily on mayfly nymphs and whatever else is washed down to them.

Almost all fish I found were post spawners with the majority being very dark jacks.

The best conditioned fish were the hens, with the largest one just over the 5 pound mark.

It was great to see such good fish numbers in the Ngaruroro system.

All fish were sighted and presented with either a hare and copper or pheasant tail, most couldn’t pass up the offer!

Once the storm hit I was quickly out of the river.

It was good to see some other anglers having success too !

With the rain just before opening the TukiTuki headwaters had some colour in them along with a some of the tributaries.

That being said there was still some clean water to be found!

Fish landed were mostly post spawning rainbows with a few good ones over the four pound mark finding the way to the bank to some lucky anglers.

Pheasant tails seemed to be the favourite of the fish.

The Mohaka tributaries and main river were hit with a bit of rain before opening, colouring up the main river.

There were still good opportunities in the edges with some good sized rainbows being caught and released.

Some other northern rivers produced well before the storm hit, with the usual post spawning rainbows being the majority of the catch with the odd brown mixed in.

Once again the river is on fire.

The fish are still in excellent condition. a few days after opening I headed up to a favourite spot near the mountains.

I caught five fish in just a few hours with the best being a 2.3 kg hen which was in spectacular condition for October.

These trout are liking the small hare & coppers, with some even rising to hatching mayflies. Make sure to have a few parachute adams in your box for these fish looking towards the sky.

With the week ending and some really good weather just around the corner the larger rivers will drop and allow anglers to fish in the head waters.

Its heating up out there people!, I even heard some cicadas the other day!

Tight-lines for the new season.

Our Rangers were out and about around the region over the opening week – so far all anglers contacted have been compliant, and the majority of those talked too reported good catch rates which is a great all round result!!!

Hawke’s Bay Fish and Game Rangers have a lot of ground to cover when it comes to visiting anglers so getting everywhere is a challenge.

But eventually you’ll come across a Ranger and when you do, don’t be afraid to have a friendly chat as your thoughts and concerns are important and it’s a great way for us to hear what’s happening out on the water.