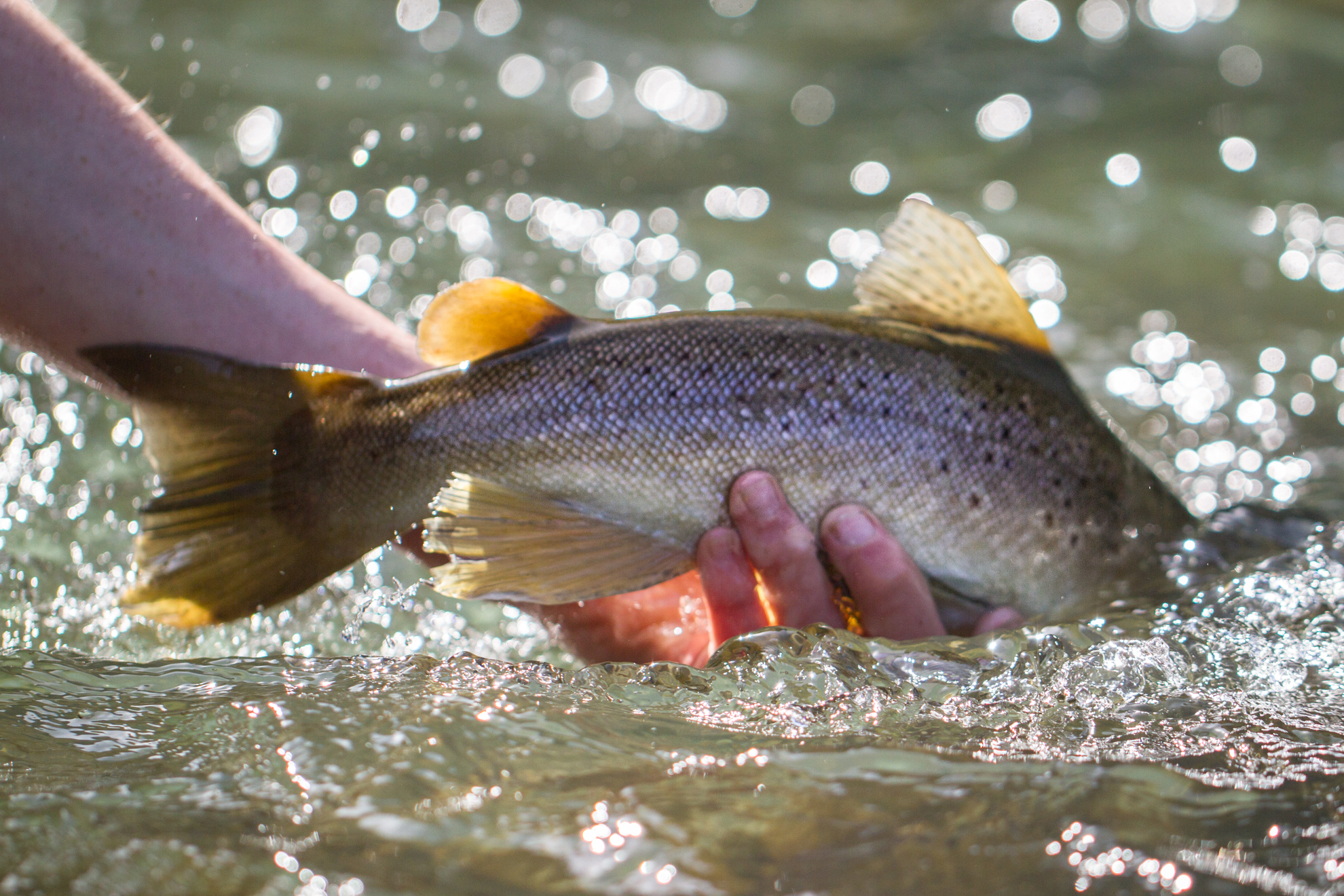 It’s that time of year again when the temperature starts to rise and weather becomes increasingly steady.

The fishing becomes most enjoyable with warm water lapping at the legs and the warmth of the sun on your back.

Trout are easy to see with clear and low water and are actively feeding.

Right: ‘Release back into the Mohaka’ – supplied by Stu Hastie.

Field staff have recently been undertaking electric fishing surveys in the upper reaches of rivers and streams throughout Hawke’s Bay.

Juvenile fish are temporarily stunned, measured and then released back to the river unharmed.

This helps us to monitor spawning success and will show trends over time.

Generally, we have seen good numbers during our surveys this season which is great to see and bodes well for the future of these fisheries.

If you see staff out on the water please feel free to ask any questions you might have.

What a wild end to October we got...

A very big dump of rain arrived to more than fill our rivers up.

The Tukituki almost doubled that with 790,000 Litres flowing through per second.

As ridiculous as it sounds the fish are more than capable of surviving these flows.

They tuck away near the banks and ride out the high flows.

From reports that have been coming in, fish seem to have done well, and are still in good condition after the high water.

After a high flow, many of the river’s pools have changed, creating different opportunities for anglers.

With a heatwave already passing by, the cicadas are out along with many other insects.

The trout have been keen to feed on nymphs and are beginning to group up into the deeper pools.

This is to avoid the warm waters in the main flow.

Sometimes you will find 15 fish in one pool if it is cold enough.

Try to keep your flies as small as possible while incorporating some weight.

Pheasant Tails and Hare n Coppers are the go-to’s as per usual.

Fish are averaging from 3 – 4 pounds and are still fighting hard with the river still a nice cool temperature.

The Tuki is in its prime time right now.

Whitebait runs will be continuing, and the river has fallen to a nice clear level.

It doesn’t have the weed we get later in the season.

There will be some stonking browns hanging about if you look through the backwaters.

Rainbows will be starting to fill up after dropping back from spawning too.

In previous years this is the time when I have caught some fish over 5 pounds on caddis dry flies, so be sure to have one waiting to go.

Parachute Adams #14 should always be in your box if you find a mayfly hatch since the trout go mad on them, especially the Rainbows.

At this time of year, you could expect to catch a fish from one pound all the way up to a 15-pound monster!

I have even heard rumours of a few 8 pound plus browns lost in the last week alone.

Anglers are reporting good success most days they are on the water, with Rainbows being the predominant fish caught.

These are mostly being caught on nymphs and are averaging around the three pound mark.

Rivers are in good condition with fish looking to be going well.

They have begun to look towards the skies, with some anglers reporting nice three pound rainbows smashing big stimulators.

These rivers will fish well in the period up to Christmas before they get too low so make sure you check them out.

Check the riffles near the willows as the fish will sit there and grab the passing caddis.

Throwing in a fly to these fish with a longer leader is deadly.

Try nymphs in size 14 and dries of all sizes.

After peaking at 570,000 litres a second the Ngaruroro settled down back to its average 30,000l/second where it has been sitting for much of the year.

Snow melt hasn’t allowed the river to drop to a manageable level.

With the recent warm weather, it got as low as 14,000 where it would have been great to fish.

It is now sitting at 20,000 around Fernhill and looking like it will be ready to go properly next week.

This time of year can be particularly good once the river cleans.

Fishing can be spectacular in the mid-lower reaches on both rainbows and browns.

A pheasant tail or hare n copper cast into any drop-off you find will pick up lots of fish.

Try to find deeper water near the willows, fish love these areas.

The browns have come out to play with Rainbows hot on their tail.

Plenty are being caught by anglers making the trip up into the hills.

Try out some big bushy dries and you may be surprised with the fish you might attract.

The usual three to four pound is what you should expect but there are always outstanding fish over six if you strike some gold.

There are some lovely browns and rainbows coming from this river and on both fly and spin.

All fish seem to be in great condition with one I saw recently being an absolute chunk.

Try to use line as light as possible to avoid spooking fish.

They seem to love the veltic style spinners in this section but a nymph would do well too.

The lake has just opened for fishing at the start of November.

I headed up for the first time this past week and was pleasantly surprised by the awesome little lake.

The lake is filled with weed beds, so it is very much an insect fishery.

I have had reports of some stunning fish in the five pound range over the past few seasons with some bigger than that present also.

Trout seem to cruise the channels between the weed looking for food.

They definitely travel on a beat, so it pays to be patient.

I cast a small green woolly bugger into these areas and found some success.

A 3.9 pound fish took me into my backing and I had a wonderful scrap before releasing it.

I definitely will be back to this lake to look for some bigger fish.

Posted in Reel Life; Posted 2 years ago by Richie Cosgrove