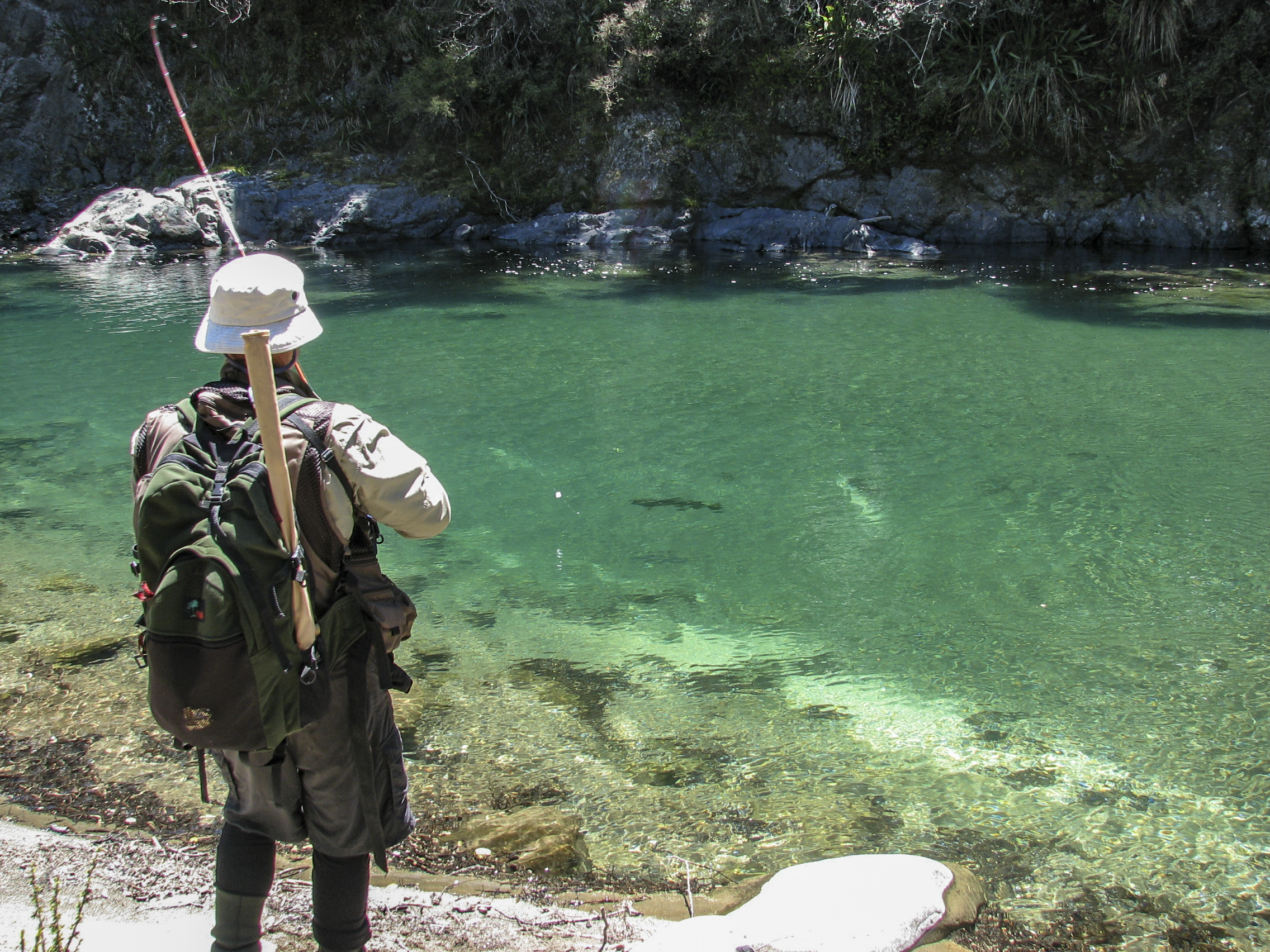 Autumn is here and with it, a significant change in temperature; something the trout really will be enjoying.

The cicadas are chirping but not with quite the ferocity of February.

Trout are rapidly putting on the pounds and we will soon see the biggest rainbows of the year caught.

I’ve got my eyes on a few spots that should be excellent for fish above six pounds.

The Ngaruroro has been very low for the last month.

For the angler, this bunches the fish up in easy to find pools and some of them (especially from Whanawhana – Fernhill) will hold upwards of 10 fish.

Look for any rapid depth changes; this could be near willows or the end of a riffle as the river takes a curve.

If you look hard on the edge of a drop-off you will see the dark shapes of rainbow trout swinging from side to side, feeding on their favourite cased caddis.

On drop-offs like this, I caught and released 12 in short succession during March, averaging around three pounds.

Above: The upper reaches of the Ngaruroro has some great pools

This river really comes on strong once the height of summer disappears and weed growth begins to break down with the occasional flush of rain.

This leaves some of the most crystal-clear water you will find close to town.

Rainbows are packing on condition with many comfortably surpassing the five and a half-pound mark.

Nymphing has been by far the most successful method with fish only taking the occasional dry fly.

Long casts have become the norm since fish are quite switched on to the threat of anglers in shallow water.

Any water deeper than waist-deep is the place to look, with usually three to five rainbows holding in each pool.

It’s also been great to see a lot of small trout from three to eight inches patrolling many of the shallow riffles.

Lookout when you are casting to larger fish; they may just take the fly before the big one does.

The best places to fish on the Tutaekuri this month are Puketapu, along Dartmoor Road and Flag Range Rd.

The fishing here, for me at least has been up and down.

I could not find many fish in my usual late summer hotspot at River Rd near Havelock.

I managed to land the three fish I did find, and all were nice three pounders.

Other anglers have been doing better up and down the river.

Most of the best fishing has been located up Middle road and towards Waipukurau.

Brown trout have also been making themselves known in this area.

A good tip for fishing the Tukituki is to arrive right after some rain has flushed the weed out.

This will produce great spotting conditions.

As we get later into Autumn the fishing will improve as the water temperatures settle down.

The best places to fish this month would be; Kahuranaki Rd, Patangata, Red Bridge and Pourerere Rd.

There are lots of brown trout hanging around across the Central Hawkes Bay rivers.

You will find much more golden coloured fish compared to the ones you might find out on the coast.

These have been taking both nymph and dry, but especially caddis patterns.

Try a dry dropper with an elk hair caddis and the browns will be sure to have a look at munching one.

Stimulators would be the next best thing to imitate a late-season cicada.

Try the upper Manawatu if you are looking for something different from the rivers around town.

Even though the water is shallow like the Waipawa, it will still produce plenty of fat autumn rainbows.

Several local anglers have been doing well on small nymphs usually in a mayfly or caddis size 16 – 18 pattern. 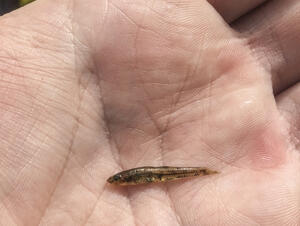 One of the small fish trout feed on in Lake Tūtira.

The lake seems to be in good health.

Apart from some quite high surface temperatures (22 deg in some places) the water is mostly clean and lots of trout were spotted on my sounder; all over 10 metres down and sitting mostly near the top of the thermocline.

This lake does not support a good shore fishery in summer due to surface temperatures and trout will rarely be seen at the surface again until at least mid-April.

Even though trout are almost never seen in summer, that does not mean they aren’t hunkered down deep waiting for the cooler months.

I picked up one of these fish, jigging with a Jack Spratt.

Thankfully, there is a lot of food for the fish down deep, and they will fatten up year-round.

Although there are fish across the lake, most will stay near the bottom no deeper than 14 metres.

This is due to the good feeding grounds here.

Anglers are reminded that the Winter licence category is available to purchase from 1 April which lasts through until the end of September 2021.

This is a great category for those anglers that want to take up the sport again or give it a shot for a reduced price for the remainder of the fishing season.

With some very well-conditioned trout out in the Hawke’s Bay rivers at the moment and some warmer weather expected in the Bay for at least another couple of months, anglers yet to purchase a licence this season are encouraged to take up this great opportunity.

Winter Licences can be purchased for $80 and are only available to adults.

Posted in Reel Life; Posted 10 months ago by Default Admin