March was a relatively wet month for the region with some quite localised flooding early in the month affecting the Esk and Tutaekuri catchments in particular.

According to the Hawke’s Bay Regional Council’s website, the Tutaekuri River peaked at just over 650 cumecs at Puketapu and was an impressive sight in full flood.

The Esk River peaked at 1,000 cumecs at the Waipunga Road bridge and brought significant flooding to properties in the lower reaches. Time will tell how much of an effect this flood has had on the Esk River fishery in particular. 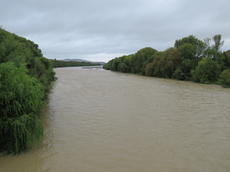 Tutaekuri River in flood in March at Puketapu.

The lake has continued to maintain good water clarity during March with visibility up to seven metres, impressive for this time of year.

Two rainbows were caught during early March (480mm and weighing 1.7kg and 460mm and 1.5kg) by an angler shallow trolling in his row boat.

Both trout were in excellent condition and it’s encouraging to see that these fish have been growing well over the summer months.

Some other anglers reported seeing a number of fish rising on the surface and catching browns up to 7lbs in weight.

As the air temperatures slowly drop over the next couple of months, it will be interesting to see whether there will be reasonable numbers of adult trout starting to appear for shoreline anglers this winter, not something that we’ve experienced in recent years.

The river was also affected by the early March rain but to a much lesser extent than the Tutaekuri and Esk rivers.

Flows of 260 cumecs were recorded in the lower river at Fernhill but they have returned to 20 cumecs at the time of writing this report.

A sample of seven rainbows (over 350mm) caught over the last month by anglers have averaged 440mm and 1.3kg (2.9lbs) and have been in excellent condition overall.

The heaviest rainbow reported through the online angling diary scheme was a jack measuring 550mm and weighing 1.9kg (4lb).

Good numbers have been caught in the lower reaches by anglers spin fishing and fly fishing.

Some very well-conditioned rainbows and browns have been caught in the Mohaka River around Pakaututu over the past month to anglers fly fishing with heavy buggy nymphs and large terrestrial dry flies.

Solid rainbow from the Mohaka River.

The Mohaka was less affected by the rain during early March and largely remained fishable throughout.

Areas upstream of the Blue Gums can be worth a look from Easter onwards as some of the adult trout start to move upstream to their spawning areas.

With assistance from a number of volunteers, these children got to experience fly fishing for the first time and all managed to catch a trout.

Most trout caught were hot smoked on site. The rainbows caught averaged 497mm and 1.2kg with one of the youngest kids landing the largest 2kg fish on the day.

Staff would like to thank everyone that helped to make the day a great success.

Winter fishing licences are available to buy from April 1 (adults $76) for  the remainder of the season until 30 September.

They are a great way to fish the last six months of the season for a discounted rate if you haven't bought a whole season licence this year.

It’s also a way to introduce someone new to the sport and make the most of what this region has to offer over the coming months.