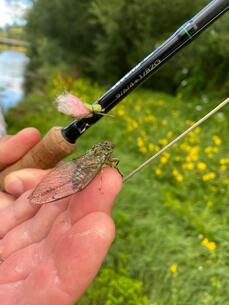 The wet summer we were promised has turned up big time this February with two cyclones passing by in two weeks, causing chaos throughout the country. Hawkes Bay’s rivers all received some well-deserved water, flushing out the accumulated weed. With the high water recently, brown trout have been caught consistently across all of our main rivers, usually just after the rivers start to drop.

The Ngaruroro had been fishing well during early February for mostly average sized rainbow trout (2 – 3lb). Fish have been getting plenty of pressure from anglers and other river users and had become more difficult to hook in the low water. The rain soon sorted the river out for the next few weeks, giving fish time to relax. As I write this, the river is running at a slightly coloured 15m/sec, very close to a nice fishable level. It sat at just 2m/sec before this rain! Now is the time for spinning and streamer fishing as fish will be keen to feed in the murkier waters.

The Tutaekuri has been hit unusually hard by the rain during February, peaking at over 50m/sec. The river is now sitting at 13m/sec and will likely be fishable over the coming days. Historically, March-May has been a great time to fish the Tutaekuri with lots of fish in great condition, ready to pack on more weight before spawning. Keep an eye on the backwaters for large groups of fish trying to find refuge from the heat.

Brown captures have been making an appearance on the Tuki as they often do after some rain. The fish relax in the murky water and take flies during the day more readily, especially on the cloudy overcast days we have been having recently. February is definitely one of the better months to target this river as fish will spread out down to the lower reaches. Drop-offs and willow trees remain the best locations to find rainbows, with browns normally sitting further back in the runs or right up in the shallows. 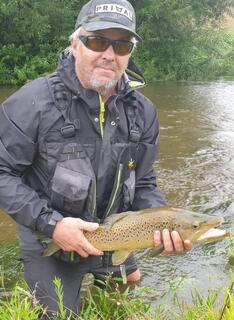 Central Hawkes Bay has also seen its fair share of brown trout captures over the last month with a couple of nice fish taken on cicadas right as the small streams were beginning to colour. I find that fish commonly feed very hard just before a weather event. Plenty of rainbows are being caught in the lower reaches of the tributaries where it is cooler. With the significant rain that has come through, fish will be able to spread out and return higher up the streams before low flows force them back out.

February is primetime for the loch Leven Browns of Lake Kuripapango. Damselflies are hatching at a breakneck pace during the hottest days, leading to some of the best dry fly action on offer in Hawkes Bay. Dry flies like cicadas, damsels, dragonflies, or anything else of a decent size will get the browns’ attention. Watch for the jumping fish and cast ahead of their landing point. If the hatch isn’t on (usually on colder/ overcast days) tie on a green nymph or small woolly bugger and have some fun stripping the flies in around the weed beds. This lake is open year-round and has the odd, good fish up to 3lb.