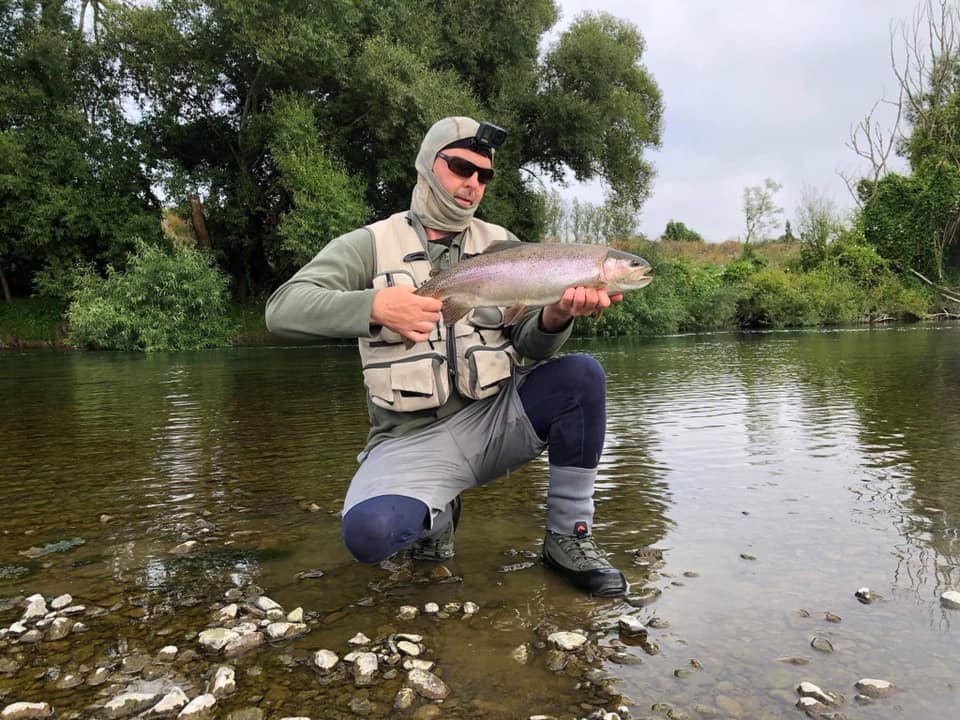 We hope everyone had a great Christmas and a happy New Year and are looking forward to another year of fishing!

The hotter temperatures have created a wonderful chorus of insect song, which is music to the ears of trout anglers.

The Cicadas are abundant and people wanting to take advantage of this should try a cicada pattern fly from mid-afternoon onwards.

Midge hatches are also abundant with hatches on the Tukituki River sending trout into a feeding frenzy.

The same goes for the manuka green beetle in the upper reaches.

Spin anglers should try to imitate what they see.

Black and yellow coloured lures work well and look like bumble bees that have landed in the water.

Veltic lures are good at this and have the addition of vibrating as they swim through the water; a magnet for trout in faster flowing water.

It’s been a pretty busy period for the rivers, but the holiday season is now coming to an end.

As the pressure slows down on the water, the trout will become more susceptible to capture.

Thankfully, the weather has been kind (apart from the odd thunderstorm) and rivers around the region are all clean and fishable.

I have been down to the Ngaruroro on a few quick missions and I am happy to report the Rainbows are in great condition and also widespread across basically every access point I’ve been to. Although some higher water has moved through the system recently, the river has dropped back to a great level to fish. Upstream from Fernhill, Whanawhana and Maraekakaho seldom has anglers and fish numbers are typically very high per kilometre.  Brown trout have been seen more commonly in the late afternoons feeding in the shallows. They require a very stealthy cast when their tails are almost out the water! Make sure you get in and fish before the water warms too much, as algae build up can make fishing the Ngaruroro a struggle.

This is probably one of the more popular spots in the region to go for a swim and the trout have had to adapt to the addition of many people down on the riverbed. I found one fish quite happily feeding just above a very packed swimming hole near Puketapu so do not discount having a go. The condition of the rainbows is fairly average, fish are mostly at the 3 to 4-pound mark with many sure to hit 6 as the season continues. A few browns have been caught recently. The Tutaekuri is not much of a brown fishery so a few more being caught is a great thing to see. As the water is quite low, I recommend fishing 4lb tippet and using small nymphs in the 16 – 18 range. It does not hurt to throw a cicada at a few of these fish either. As per usual, find the deep water, that is where they are likely to be.

There have been some excellent reports coming in from the Tuki recently. I have heard of a few people landing upwards of 15 fish in one session. These are all good-sized Rainbows in the 3 – 5 pound size. The low to mid sections now have the larger fish back in a big way and fish are schooling up in large groups. The Tukituki gets quite weedy in summer so make sure to watch your footing while crossing. A good tip I have for clearing weed off the line is to cast right at your feet and give the line a hard pull as you back-cast. It saves a lot of time instead of doing it by hand. The brown trout have not been seen as much recently, but my bet would be to look in the backwaters for cruisers. If you want a dry fly take, chuck a caddis on and skate it across the water at dusk; plenty of fish will be looking for a hatch in the evenings.

There are some excellent catches being pulled from the tributaries down south and most of them are the typical football sized rainbow we are used to. Some fish have been weighing as much as 5lb which is great to see this early in summer. It seems like there is a large variety of markings in the gene pool as some fish are silver with small spots and others bright pink with large spots right through to the tail. Fish can be in extremely shallow water (think tails out of the water) so walk along slowly and be prepared to spook a few. Try and keep your flies light so the fish don’t spook when it lands. Keep the nymphs small too 16 – 18 is a good starting point.