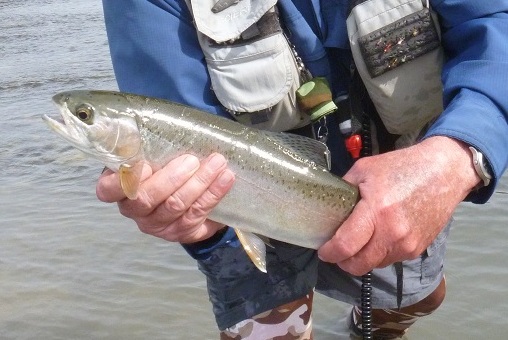 The busy holiday period between Christmas and New Year saw air temperatures drop to single digits overnight with some unseasonably cold and wet weather descending on the region.

Rainfall in some parts of the bay saw rivers and streams rise and discolour into the early part of 2018, with many of the rivers starting to clear sufficiently by mid-January.

Hopefully this will have cleaned the bottom substrate of weed and algae to make for easier fishing, wading and crossing as we head for mid-summer.

The Tutaekuri River produced some young rainbows in the range of 300-350mm during early January, with many of them reported to be in excellent fat and shiny condition that all fought hard.

The heaviest rainbow reported during January was a hen measuring 510mm and weighing 1.7kg (3.7lbs) caught nymphing above the Mangaone confluence.

Anglers that have kept trout from the Tutaekuri upstream of the Mangaone confluence have reported that the trout have been full of green-cased caddis larvae. Green nymphs in sizes 12 to 16 should work well especially when the river is clearing after a small flood.

A sample of eight rainbows measured from near the Te Puia hut prior to Christmas averaged 443mm with the largest reported at 540mm. Two browns from this area were also reported ranging between 530 and 560mm.

There are some good pools and areas to fish if walking upstream from the Blue Gums carpark to the Te Puia hut, and many trout should be rising to dry flies at this time of the year.

The Makino River and can also be worth a look for those wanting to venture further upstream of Te Puia hut, but care is required with presentation to ensure success as the season progresses.

There was a significant fish kill at Lake Waikopiro on Friday 12 January thought to be due to a ceratium bloom die-off that consumed oxygen as it decayed, despite the lake remaining fully mixed due to the recent installation of an aeration bubbler system last spring.

About 50 rainbow trout of various sizes died along with a significant number of bullies. The trout have been kept for further analysis to monitor their growth rate over recent years.

Staff assisted HBRC and Maungaharuru Tangitu staff to capture and release over 60 large eels that were along the lake margins and transferred them into Lake Tutira which is currently looking good.

Anglers wishing to fish for trout in these lakes are advised to focus on Lake Tutira in the interim.

Rent our hut on the Mohaka River

Licenced anglers are reminded that there is a Fish & Game hut situated on the terrace above the DOC camp ground on the true right bank of the Mohaka River on Waitara Road off the Napier-Taupo Road.

This small hut sleeps four and is available to hire for $25 per night. It’s an ideal spot to fish the Mohaka River or to use as a base to venture further afield.

For further information or to book the hut please call the Hawkes Bay Fish and Game office on 06 844 2460.

Hawkes Bay Fish & Game Council is starting to review the fishing regulations for the 2018/19 fishing season that begins on October 1, 2018. Licenceholders and the public are able to submit on any issues they may have identified with the current regulations.

Any suggested changes, and rationale for those changes are welcomed. Please email your suggestions to: hawkesbay@fishandgame.org.nz