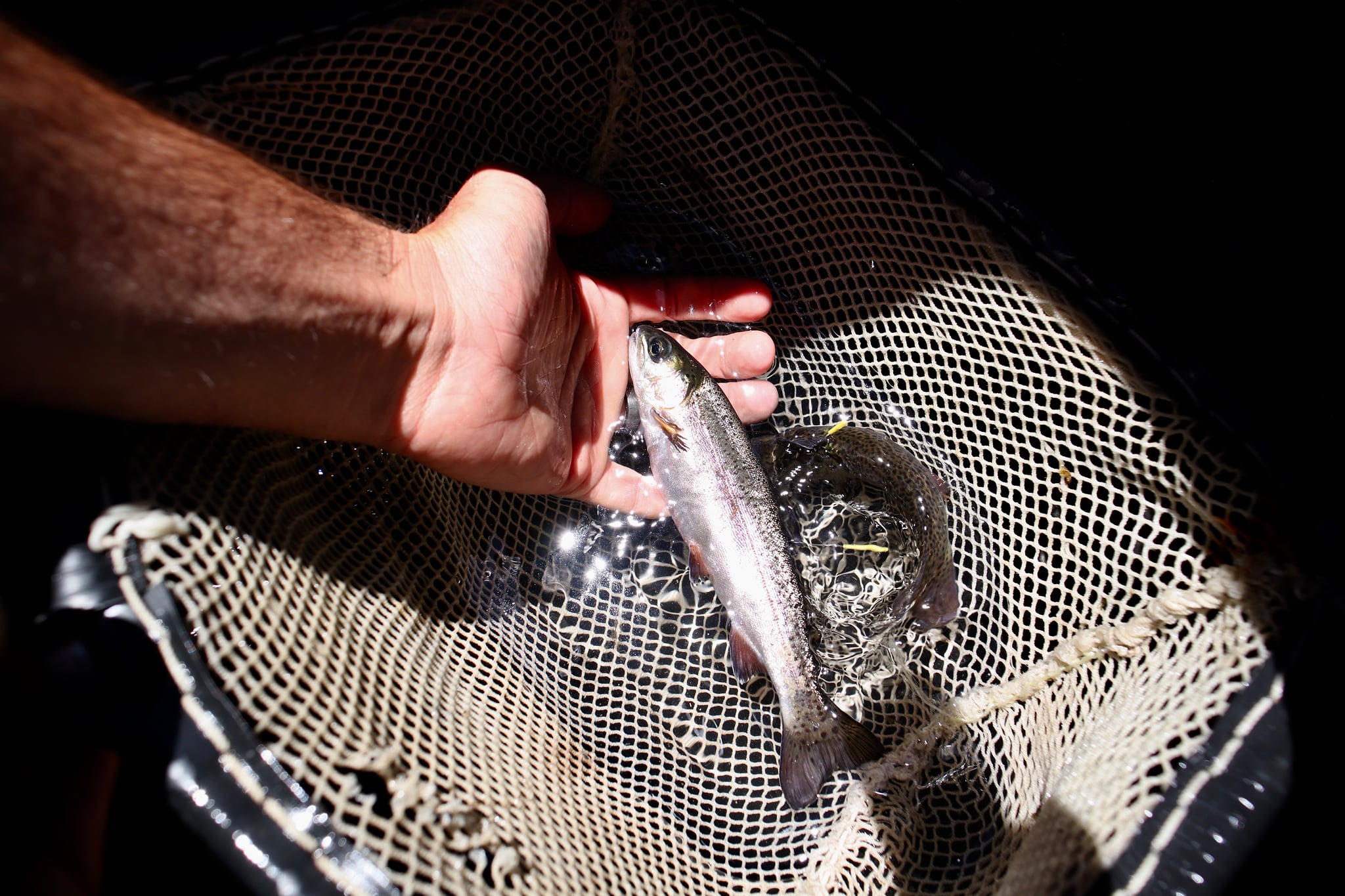 Temperatures in the Hawkes Bay have reached the high 20s during December as we enter early summer.

These warmer temperatures have had many of the trout looking up to the surface as trout will be making the most of terrestrial insects being carried downstream, there have been some good reports of fish taking dry flies during the day across many of the regions rivers and streams.

A dry fly with a nymph suspended half a metre beneath it has also been working well when fishing shallower riffles and drop offs.

50 tagged yearling rainbows were liberated into Lake Hawkston in December to supplement this small lake fishery near Patoka.

This lake is open to licenced anglers during daylight hours until the end of March and is great little lake fishery for those looking to fish somewhere new.

Please contact owner Dave McPhee on 0275 422 665 to arrange access. Don’t forget to send in the info of any tagged fish caught.

Above: Tagged yearling destined for Hawkston.

After some significant rain, the Tutaekuri has settled down nicely as per usual.

The water will be different in many of our favourite spots, so it may take some time to find the new fish holding locations.

In the last week or so it has dropped to 5m/sec which is perfect for all styles of fishing. When I fished this water recently, I found a large majority of fish lying deep in the pools.

These are only reachable with heavy nymphs and that is what I typically use until the cicadas become a bit more widespread.

As we get closer to Christmas the cicada fishing will pick up.

Keep an eye out for brown trout since there have been a good number of whitebait moving through the system. If you’re spinning, try a small white lure to match the hatch. 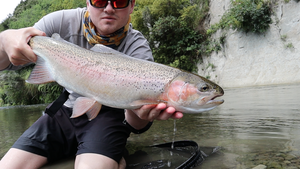 Blair with a nice Ngaruroro rainbow.

It’s been months since the Ngaruroro dropped to a nice level and December has finally brought that to us.

At about 16m/sec the river is still murky in the pools but completely spottable on the edges.

When the river is higher like this, the fishing is excellent.

Rainbows sit in the rough water feeding up hard after spawning.

It can be difficult to spot the dark shapes feeding away under the ruffled surface.

Great fishing has been reported right throughout the system, with murmurs of the odd brown too.

You’ve got to be in to win.

The Tukituki continues it’s typical year to year flow, with many pools unchanged from early 2020.

There seems to be a lot of water in the system at the moment which can make the fish hard to find.

My tried-and-true method is sticking to the riffles near willow trees.

Keep an eye out for the vast schools of grey mullet in lower reaches which are currently gorging on the weed flowing downstream.

Often, I find trout in similar areas too.

Remember if you can see extended pectoral fins, you’re likely looking at a mullet and not a trout.

There has been a good number of rainbows caught with most being around 3lb but many more pushing up to five.

The Tukituki really comes into its own after Christmas with pools full of fish appearing seemingly out of the blue, so keep your eyes open.

Spawning is basically all finished down in CHB with all main tributaries of the Tukituki and Waipawa now filling with resident fish which seem to be loving the good river levels.

I counted at least 15 fish in one pool on the Tukipo which was a great surprise.

Many were right in the shallows with their heads down, getting stuck into the food drifting downriver.

A lot of whitebait made it up to the tributaries and the trout will surely have one eye looking for a these along with their usual favourites like caddis and mayflies.

Try any flashy spinner and you’ll be sure to spark some attention from the fish.

When fishing these rivers try to ignore the shallow water and focus your attention on the willow lined pools. Most of the fish will be in the deeper, cooler water waiting for a snack.

Summer is a busy time of year with plenty of people on the roads.

We urge you all to take care while driving to your fishing spot as roads can be dangerously busy, especially on some of those narrow backcountry roads which lead to popular campgrounds, fishing and swimming holes.

Respect other users whether swimmers, rafters or trampers and to take care and always tell someone where you are going, especially if you are heading off alone.

From the team here at Hawke’s Bay Fish and Game, we wish you all a very merry Christmas and a happy New Year.