The new fishing season is only five weekends away and your new season fishing licence will unlock the full fishing potential of New Zealand for you to explore.

Every bridge you cross, every lake you see contains fish and offers you a fantastic opportunity to recharge, see New Zealand and maybe experience some wild food.

New Zealand is home to some of the best freshwater fishing in the whole world. Every year thousands of anglers from across the globe beat a path to New Zealand to experience our fantastic fishery.

Many kiwis are unaware of the amazing freshwater fishing on offer right on their own doorstep. We often drive over rivers and alongside lakes without realising the great fishing that is on offer right where we are.

As we travel locally this year, sharing our tourist dollar with fellow kiwis and exploring this great country, it’s time to explore a little deeper by giving fishing in different places a go.

Ever since the first fishing licence was sold in Dunedin in 1874, kiwis have been enjoying the spoils of a world-renowned fishery. The only thing you need to do to go fishing in New Zealand is buy a licence, which helps support and maintain this fishery for future generations of kiwis.

There are not many places in the world where you can drive alongside a waterway, pull up, grab your rod and reel and go experience our great outdoors and land yourself a wild trout or salmon, all whilst taking in our jaw dropping scenery.

The Fish & Game website fishandgame.org.nz provides you with a shortcut to angling success with loads of information on where to fish and how to fish. Our pages are packed full of advice on how to get started with what gear to use and where to go to, or more advanced tips to elevate your angling experience.

Our YouTube channel and Facebook pages also have loads of info for those that may not have picked up a rod and reel for a few years, or for those that are new to the sport that will help make that first cast more successful.

Fish & Game staff have spent many years making it easy for anglers to achieve fishing success by negotiating access points and putting information signs around fishing hotspots the length and breadth of the country.

Finding these spots has now become even easier with the addition of Fish & Game Angler Access points into the Campermate app, which goes live first week in September.

Using this app will unleash a world of opportunity for you and your family and remember, you may be surprised by how close some of the spots are to you.

There are great fishing opportunities close to our urban areas, so it’s often not necessary to mount a major expedition in order to have the chance to fish.

Success is easier than you think; our lakes and rivers hold healthy populations of fish and when you are travelling around what better way to get a wild free-range meal for the plate than by a bit of relaxing fishing. 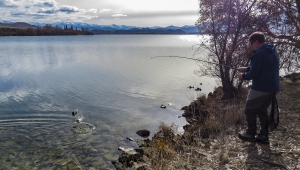 Brown trout spawning is over now and hungry post spawning browns will be cruising the shallow lake margins in September looking for anything edible.

In our Lakes, brown trout will be in right in close to shore.

Approach these fish carefully as they can be spooky.

It is best to spot the fish first before making a cast and never cast directly at the fish, rather a few metres in front of it in the direction that it is heading.

For starters, spin anglers should keep it simple and use old favourites like the 7-gram black and gold toby or go a bit more life-like and use a soft plastic lure.

The weight of the lure will be key to ensure you’re not getting snagged in the shallows too often.

If you're spooking the fish with your spinner then fish a fly under a clear bubble float, split shot may be needed to help sink your fly.

September often has low lake levels before the spring melt fully kicks in, this provides a great opportunity for shore-based anglers to get closer to the drop offs and permanent weed beds.

These are hot spots for spring fishing.

Keep it simple at these lakes, just cast a heavy lure like a 10-20 gram brass hex wobbler out as far as you can into deeper water and retrieve at a medium speed.

Please remember in some regions the tributary rivers and streams of lakes can be closed in September for fishing.

Magazine on the way

Your annual fishing special edition of the Fish & Game Magazine will be hitting letterboxes in the coming week.

Packed full of how-to info, there are special features on two of our lake fisheries – Rotorua and the Waitaki valley.

Each Fish & Game region also has updates for licence holders on their activities and lots of intel for the coming season.

There is also loads of other helpful info about how to explore New Zealand this fishing season.

The South Island Fish & Game regions that have sea run salmon fisheries have combined their harvest survey for the first time.   The report is available on the Fish & Game website here for those interested in that species.

Keep an eye out for tagged trout in the canals 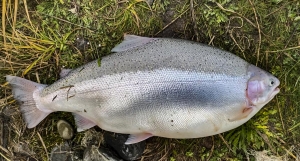 For anglers visiting the Tekapo canal fishery,  If you catch a tagged trout please get in touch and let us know the unique four-digit tag number, location, whether it was kept of release and an estimate of size.

Check this video out for more info on the project.

At the canals, rainbow trout will still be in spawning mode so it's well-worth fishing with egg pattern flies and lures.

If you are after a salmon or fat trout for dinner try egg drifting, soft baiting or bait fishing with prawn or shrimp around the salmon farms.

The Ohau C Canal has been producing some overweight trout oddities lately.

Should we continue to stock Lake Pupuke?

Auckland Waikato Fish & Game staff are seeking your feedback on the future of the Lake Pupuke fish release.

Although water quality in Lake Pupuke has shown signs of decline, the lake is still clean enough to support a healthy trout population and compared to the appalling condition of most Waikato lakes, Pupuke is in good shape.

Lake Pupuke was an exceptional fishery until perch were released by the notorious Stewart Smith in the late 1960’s, and by the 1970’s the trout fishery had collapsed.

Currently there is no means of removing perch from the lake, so the trout fishery will not recover to its former glory any time soon.

The annual fish release of 12,000 two-year-old trout in Lake Pupuke is expensive compared to the supplemental stocking of Lake Arapuni, where 2000 one-year-old trout are released.

Lake Pupuke costs licence holders over ten times as much per angler compared to the region’s other liberations.

The Auckland/Waikato Fish and Game Council is considering cancelling future releases and is seeking your feedback.

If you have comments concerning the future of Lake Pupuke trout releases, please email them to  aucklandwaikato@fishandgame.org.nz with the subject Lake Pupuke. 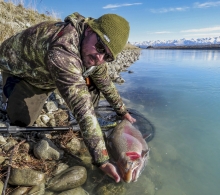 Have you seen perch in Karapiro? 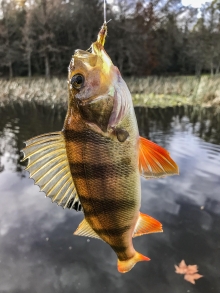 Although perch are sports fish in the Auckland/Waikato Region, illegal releases of perch have devastated some of our previously outstanding trout fisheries like Lake Pupuke and Lake Otatoa (Rototoa).

Lake Otatoa once produced 2kg plus rainbow trout and was home to the very rare dwarf inanga.

After the illegal release of perch, the once abundant dwarf inanga disappeared along with the large trout.

Unfortunately, when perch are released in New Zealand lakes, they dominate by producing dense population of very small perch that are ecologically devastating and too small to eat.

Due to the improper opening of a tunnel at Karapiro Dam by Mercury Energy staff, Koi carp were spotted in a location that gave them access to Lake Karapiro.

A survey was undertaken that detected koi in the lake late last year.

It is now feared that perch may have also entered the lake as there was a credible sighting of a perch in Lake Karapiro.

If you happen to catch a perch in Lake Karapiro please take a picture of the fish and freeze it for identification, then contact Auckland/Waikato Fish & Game at 07 849-1666.

Angling philosopher Hugh Creasy offers up his thoughts and tips on angling in his column here.

For those in the South Island who partake in saltwater fishing, you may not be aware of a new advocacy group for those anglers. Fish Mainland were formed last year and you can learn more here.

Anyone wanting to fish, jet boat, kayak in the major Canterbury rivers and lakes can now check the river conditions live via a subscription based web service called Outdoor Access.

They plan to expand nationwide and you can learn more about them here.

This year is the year to explore our Back Country fisheries, Your full season adult/junior/child, family, loyal senior and local area licence enables you to get a back country licence endorsement to fish some of New Zealand’s best rivers.

You can learn more about how to unlock these amazing fisheries here.

It’s important to note that this season there are four new back country fisheries in the North Canterbury region, two in the upper Hurunui River and one each in the Hope and Waiau Uwha Rivers.

Next month's Reel Life will have loads of helpful pre-season hints and tips from each of our regions to help you get fully prepared.

Posted in Reel Life; Posted 2 years ago by Richie Cosgrove