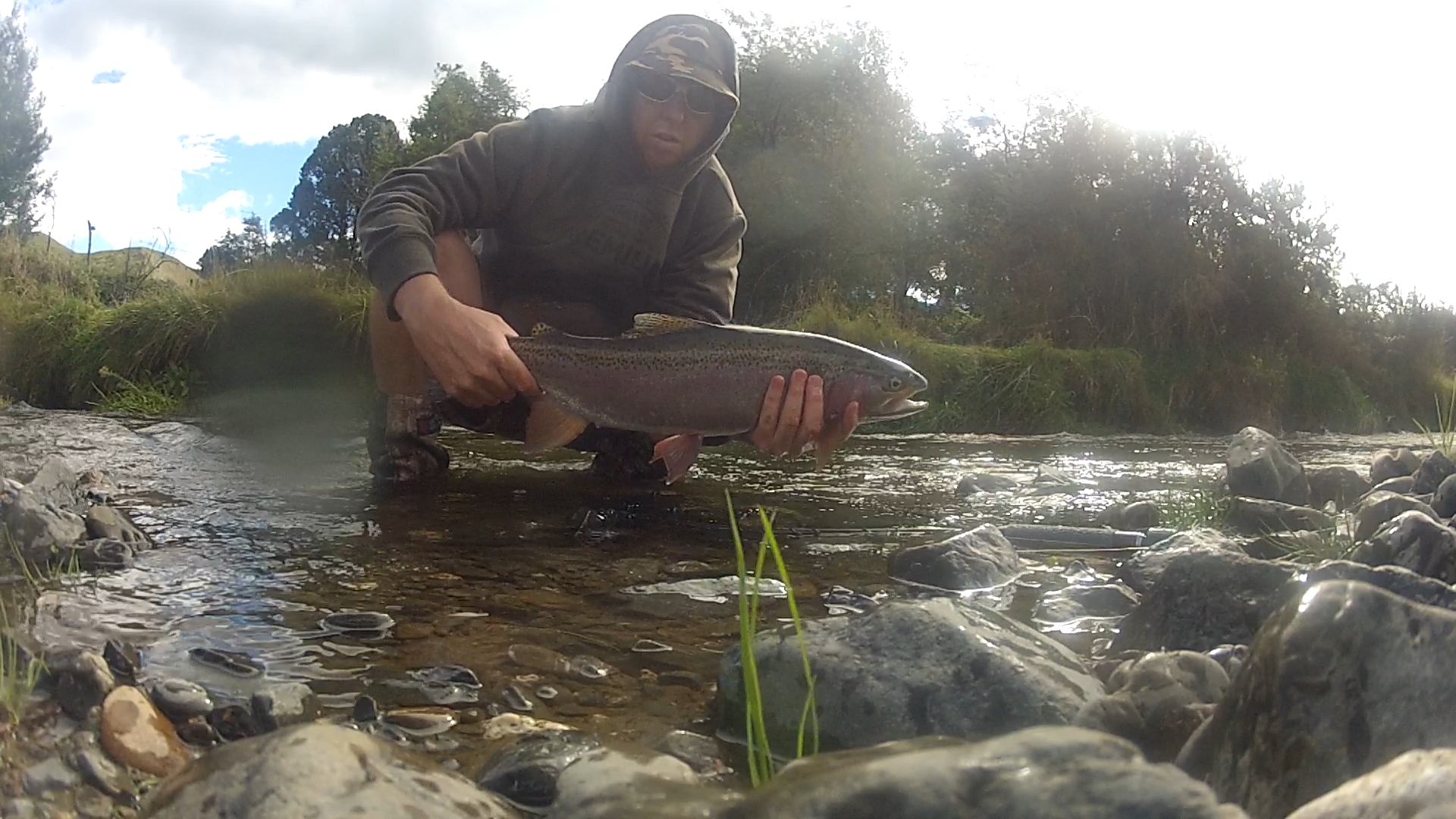 April has been a mixed month so far with some wet and windy weather mixed in with some warm and settled periods.

Right: A solid April rainbow from the Hawkes Bay. (Photo by Bevan Clinch).

The lower and middle reaches of the Ngaruroro River have been holding good numbers of well-conditioned maiden rainbows averaging 360mm and 0.6kg.

There have been reports of good numbers of trout upstream of the Mangaone confluence on the Tutaekuri River but it’s been a popular area for anglers.

The Mohaka River can also be productive at this time of year and well worth a look for anglers fly fishing or spinning especially in the middle or upper reaches.

Following on from the two rainbows reported during March, another two adult rainbows were  caught by an angler harling from his row boat in April.

The two rainbows from Lake Tutira.

It’s encouraging to see these fish maturing this year and it will be interesting to see how the shore-based anglers do this winter when more of these fish return to try and spawn along the southern shore.

The summer fishing finished at the end of March and staff would like to thank all anglers that participated in the online angling diary scheme this season.

It has produced a good snapshot of how the fish are doing and how well the rivers have fished.

A total of 185 rainbows were measured and/or weighed during the 6-month period along with 32 browns.

Average length and weight data are summarised in Figure 1 for several of the region’s rivers where data was available.

Figure 1. Average length and weight of rainbow trout greater than 350mm in length caught by anglers during the summer of 2017/18.

The average length of rainbows was graphed for trout more than 350mm in length to minimise the effect of a larger percentage of smaller fish in the total catch during the summer of 2017/18, to allow comparisons with the previous summer (Figure 2).

Average lengths were similar on the Mohaka, Mangaone and Ohara but were down slightly on the Tukituki, Tutaekuri and Ngaruroro.

Average lengths were up slightly this year on the Taruarau. The Esk was an exception this summer due to the lack of larger rainbows measured.

Overall, the rainbows from three of the four main rivers (Tukituki, Tutaekuri and Ngaruroro) are down slightly on average in comparison to the previous summer.

With all waters still open until the end of June, the next few months are a great time to fish as trout start to move up river in preparation for spawning.

This movement upstream often creates large congregations of trout in pools higher up in river catchments as they hold up, ready for their next run further up the river to their spawning grounds.

For those who might not know, a winter licence enables anglers to fish from April through to the end of September (6 months) at a cost of $76 for an adult.

So, if you have yet to fish this season, but are keen to get out over the next few months, be sure to buy your winter fishing licence and make the most of what this region has to offer.