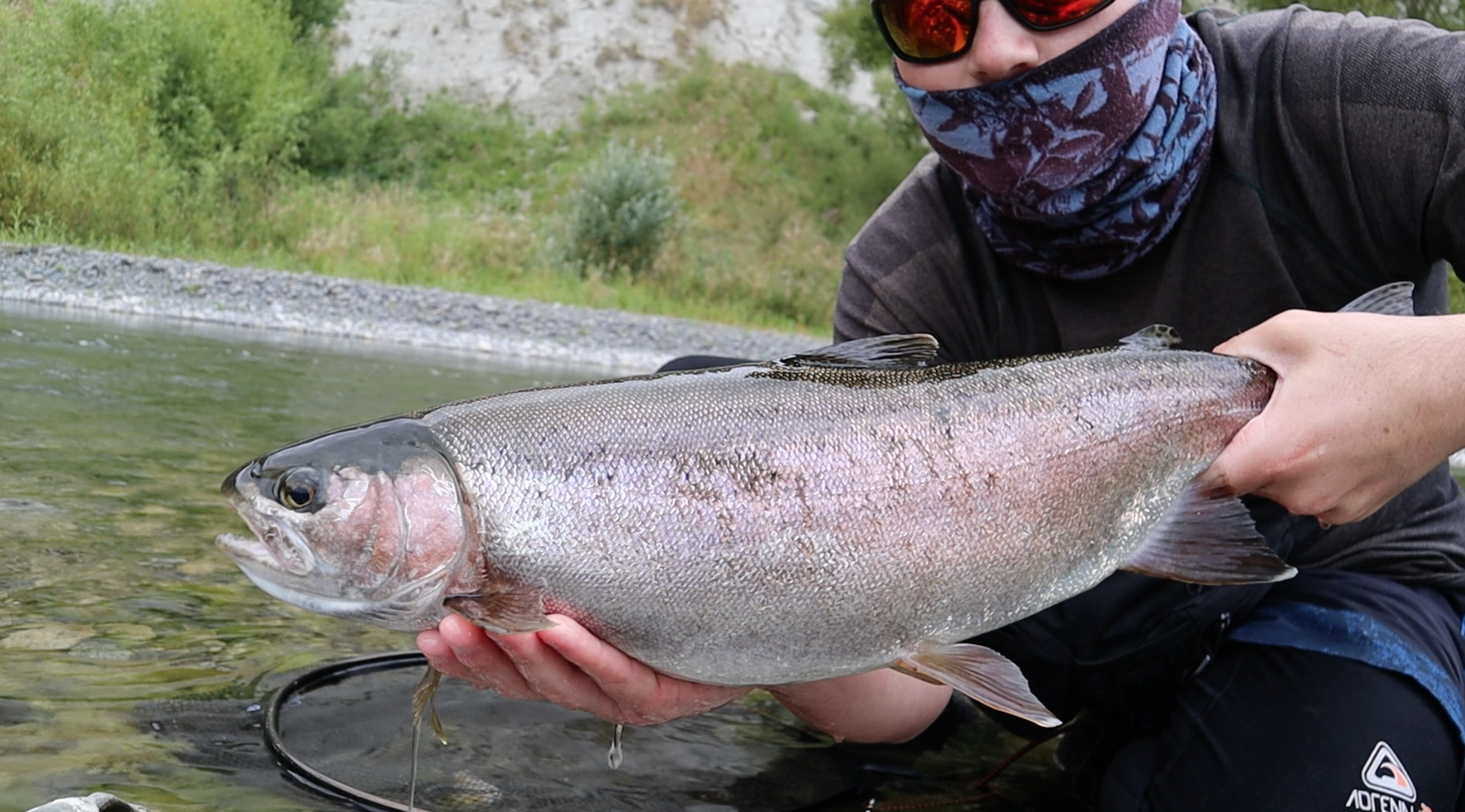 Bar a series of very hot days where the mercury reached into the mid-30s, the Hawke’s Bay summer has been a bit milder than recent years and anglers in the bay have been treated to overcast cooler conditions; a vast contrast to the hot dry days Bay anglers are used to.

Anglers who have been out are reporting good fishing with some great days being reported from the middle reaches of the Tukituki (pictured above).

“Where did all the water go?” This is what a lot of anglers are probably asking over this past month.

Hawkes Bay had an extremely dry January, the algal build-up has been a nuisance on some rivers causing fly fishing to become a pain and spinning almost impossible.

Thankfully as I write there is some good rain falling, so here is hoping it flushes some of that stuff out.

This river is very low, currently sitting at a minuscule 2 m/sec.

Algae growth has been extreme, with large clumps floating down mid current.

Most of the gravel is covered by a layer of the green stuff.

Fish are still happy but are preferring to seek out backwaters in the shade of trees.

This is where you will find the majority of the fish.

Typically, if there is some cold water seeping in, there will be many fish sharing the still waters.

A good way to target these cruising fish is by slowly retrieving a #16 water boatman.

The fish will come a long way to smash something like this.

If you want to find fish out in the open, some are sitting at the head of riffles in the highly oxygenated water.

It is not often the Tutaekuri has more flow than the Ngaruroro, at 3.3m/sec it’s nearly double that of its neighbour.

Algae has taken a hold onto this waterway too, but only in certain sections.

Puketapu seems to be remaining clean while areas higher in the system seem to be getting the brunt of the build-up.

At the height of summer most fish are holding between river road and Puketapu with some very large schools present.

I recently found a pool with at least 50 fish averaging 3lb all jostling for position.

It was not a particularly attractive stretch, but cold water flowing in just above was likely the reason they were there.

I plucked a few very fat fish out of the bunch, but most did not seem to be in a feeding mood.

If you want to find fish in this river right now, look in the deep 1.5m + water. They will be right on the bottom.

It is a similar story in the Tuki, with algae growth throughout the system.

However, there is still some good fishing to be had.

I have had quite a few reports of good-sized brown trout (up to 6.5lb) being caught in the mid-sections.

This is a welcome change to the ever-present rainbows who are also making up the other 80 % of the catch.

Try and find a riffle near some willows as the fish love this sort of water. 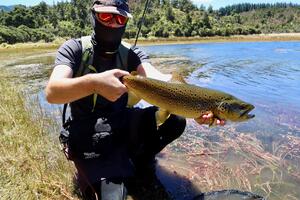 Blair with a well-conditioned Brown from the Kuripapango lake.

After waiting for a good weather break, I made my annual expedition up to the Kuripapango lakes to see how the fishery is coping.

Apparently very well! The waters are crystal clear and the lake is at a lovely fishable level.

Brown trout leap out of the water during feeding here like nowhere else.

Damselflies and dragonflies make up the majority of the food, so having a couple of dry fly imitations will give you a big advantage.

Fishing with a red damsel dry and small green marabou nymph I landed a dozen wonderful brown trout with half to the dry.

The average size seems to be on the rise with a couple of the fish landed pushing over 2 lb and more fish seen in the 3lb range.

These fish have definitely been spawning too, with a lot of fingerlings present around the shoreline and in the small creek.

I think it’s only a matter of time before a trophy is pulled out of here.

I highly recommend a trip here for something different from the river fisheries. Also, no pesky rainbows!

Posted 17 months ago by Default Admin