The Tutaekuri like most of the regions rivers, predominately holds more rainbow trout than brown trout, however spring is a great time to target the big brownies around the river mouth, as they will be feeding on whitebait around this time. From the river mouth upstream to the expressway bridge, the river is single channeled and deep making for good wetline fishing. The river upstream from the bridge is braided and often changes course, making it sometimes difficult to know where to fish, creating challenging but rewarding angling. From Dartmoor to above the Managtutu confluence the river is less braided, as it is confined between high terraces creating more pools and shallow runs, making spot fishing a lot easier. The upper reaches can be quite demanding as the river navigates between steep ranges and around large boulders, but the rewards to be found for the adventurous angler are great. Fishing ends on this river above the Lawrence Hut with waterfalls being the end for both fish and angler. 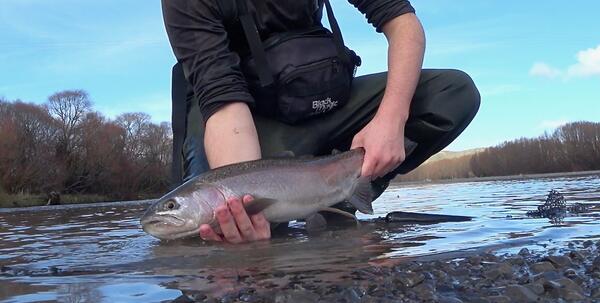 The Tutaekuri River has extensive public riverbed access from the sea to the mountains with easy access to the lower section made easy by the Hawke's Bay Regional Council, who provide excellent access points with vehicle tracks, picnic areas and safe parking. The middle section of the river above Dartmoor and tributaries have fewer public access points due to the steep terrain but private landowners generally provide this to anglers who make the effort to gain permission first. The Lawrence hut area is reached via a public access road through the pine forest and the upper reaches are on crown lands managed by the Department of Conservation. Fish and Game have placed angler access signs at key public access points and some private land access points negotiated with the land owner. Please respect access privileges to ensure they continue.

The Tutaekuri catchment begins in the steep native bush clad Kaweka Ranges east of Napier. Leaving the ranges it flows between high steep river terraces until meandering out onto the Heretaunga plains to enter the sea via the mouth of the Ngaruroro river near Clive. The Tutaekuri normally runs clear except after heavy rain that can discolour the water. Tributaries will clear in a few days with the main river taking longer. During summer, flows can get low and water temperatures increase forcing trout to move to the deep, cool water of the upper reaches and tributaries. Typical of braided catchments, the Tutaekuri bed frequently changes after high flows. This means you will have to cover plenty of water and constantly search for stable sections of riverbed, however the trout can be easily caught in their new home or as they move around.

From sea to Dartmoor the Tutaekuri River is low gradient and braided. Access is easy and extensive from the Hawke's Bay Regional Council access points and vehicle tracks. The tidal zone holds large brown trout with spring being a popular time to target them as they feed on whitebait. Above the tidal area trout frequent deeper holes, stable runs and around willows. Spring, autumn and winter are excellent times to fish this section, with trout often moving upstream, back to the tidal zone or to the deep pools during the hottest months of summer.

From Dartmoor to above the Mangatutu confluence the Tutaekuri River is confined between high terraces and is less braided, featuring more deep pools and shallow runs. Above the Mangaone confluence the river is much smaller, easy to fish and is good for sight fishing. Trout frequent the deep holes and stable runs with numbers increasing during summer and autumn. The scenery is pleasant, interesting and the water uncrowded.

The river is quite different in character in this reach. It is squeezed between the steep ranges, and forced to flow fast over and around large boulders. From the Mangatutu stream confluence to the Lawrence Hut, river access is good for the fit angler. Above the Lawrence Hut the terrain is more challenging with fishing ending at the waterfalls Refer to Topographical maps NZTopo50 BJ37 for more details.

The main tributary the Mangaone, offers many miles of excellent fishing water. River access is good in normal flows but gets more difficult above the middle reaches as terrain becomes rugged and flows are faster. The Mangatutu stream has several days of fishing available. Both tributaries hold nice trout in the 0.5 to 2kg range and numbers increase at the end of the season as adult trout start spawning migrations. The Kuripapango lakes hold lots or hungry small brown trout, making it a great place for the family to fish. Fishing from the shore or a float tube is productive. Refer to Topographical maps NZTopo50 BJ37 and BJ38 for more details.