The dry fly fishing on the Tukituki is a major attraction during the heat of summer, as many hatches such as caddis bring on strong rises, especially early morning and late evening. Many of the spring creeks feeding the river also give great dry fly opportunities through most of the summer. Upstream of state highway 50 is closed during the winter season but can provide some excellent angling during the summer months. The river is generally quite small with crystal clear water in these upper reaches and can provide some challenging fishing in the small pools. Fish can be found right into the Ruahine Ranges, so some wilderness fishing can be experienced in the upper reaches of this river. The most popular methods for the Tukituki are dry fly and nymph fishing, however wet line is just as successful, especially during winter and when river levels are high. Spinning is also very productive and is a great way to get the kids or beginner angler involved. 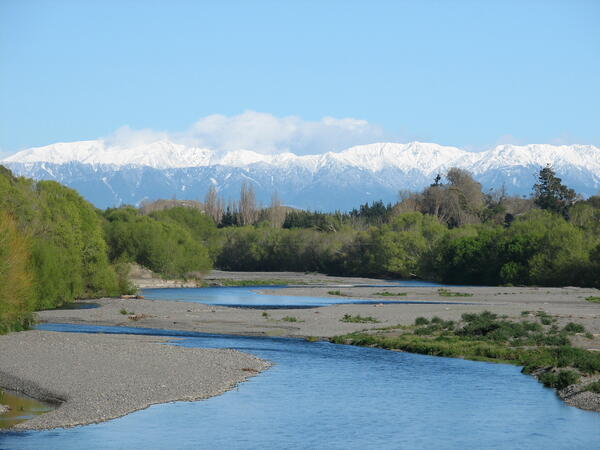 The Tukituki River normally runs clear with moderate flows. For a period of time during winter and spring, waters rise and discolour from heavy rain and snowmelt on the ranges. Summer flows can get low, and water temperatures warm, resulting in weed growth in the slower sections forcing trout into fast or deep areas and into cold water tributaries. Sections of the Tukituki bed often change after high flows. While this means your favourite piece of water may change, with a little effort you will quickly locate new productive areas. Sections of the riverbed with alga growth and clear larger gravels are likely to contain lots of aquatic insects under the stones. Willow-lined banks, papa shelves and deep pools will consistently hold trout. The Tukituki is a superb fly fishing river with trout rising to mayfly hatches during the day in winter and spring, on humid summer evenings, and to caddis after dark in the summer. Nymph fishing the endless ripples and runs can result in some outstanding fishing. Waters are clear enough to stalk trout and you never know when you will bump into a large brown trout in a secluded backwater.

From the sea to Waimarama Road bridge the Tukituki River is wide with a low gradient. Water clarity is often poor. Trout will be found throughout this section with many smaller rainbows in the long runs and larger trout under the willows. ln the tidal zone both resident and sea run trout feed on whitebait and other baitfish. Trout feed voraciously on the whitebait that run up the river from September to November. This can be an exciting time for spin or fly fishing.

From Waimarama Road bridge to the Tukipo River confluence the Tukituki River offers a huge variety of fishing. There are plenty of fast runs that are ideal for spin or nymph fishing, larger pools and willow-lined banks that hold big brown trout. Mayfly hatches arc common throughout the day in summer. Sight fishing is possible in normal flows with trout moving constantly through this section to/from upper reaches. The river is wide in places and braided and can change frequently throughout the year although productive water is never far away.

Upstream from the Tukipo River confluence the river is small and willow-lined. Sight fishing with light fly and spin fishing gear is the most successful way to fish this area. There is not generally a high density of trout in this section, but the surroundings and solitude will make it worth the effort.

The Tukituki River has a number of tributaries that arc excellent fisheries and well worth exploring. They are prime trout spawning waters attracting large mature fish during autumn and winter. Many of these fish stay on into the spring until low flows force them back into the main river. Some tributaries are sources of cold water during hot summers and attract a large number of trout. The Waipawa River is the largest tributary and provide 50km of productive water. It is a smaller version of the Tukituki with a similar range of fishing opportunities. The Mangaonuku Stream runs into the river just above Waipawa. This medium sized stream is easy to fish and holds good trout especially early and late in the summer. The Tukipo River joins the Tukituki above the Waipukurau township. Easily waded, this river is also best fished early or late in the summer. The Makaretu, Mangataura, Makaroro, Maharakeke, Tangarewai, Kahahakuri, Mangatewai and Papanui Streams are all well worth exploring.

The limit bag for both the Waipawa and Tukituki (including tributaries) is two trout (brown or rainbow) per person per day.

Both the Tukituki and Waipawa downstream of the SH50 road bridges, excluding tributaries, are open to fishing all year.

The upper reaches of the Tukituki and Waipawa (above SH50) and all tributaries are open from 1 October to 30 April.