The Ngaruroro River and its major tributaries flow down from the Kaimanawa, Kaweka and Ruahine Ranges into the sea midway between Napier and Hastings. This large river system provides over 100kms of fishable water, ranging from the deep single channeled section near the mouth, up through the vast open braided middle reaches right into the depths of nature, where the water is clear, fish are big and people are few and far between.

The pristine backcountry fishing is a major attraction of this river and good access through Crown land ensures its availability to the eager angler. Access can be obtained via walking tracks, through the crown land to these remote areas but rotary and fixed winged aircraft can also be used.

The middle and lower reaches can be quite braided and with a gravel bed are wadable, however the normal river flow is such that it often makes crossing difficult and sometimes dangerous. There are other means of access to sections of this river. These include rafting and jet boating. Road end access for vehicles is good throughout the river providing plentiful opportunity to experience all aspects of fishing the Ngaruroro.

All methods from spinning to nymph fishing are successful on this river but with big depths and strong currents throughout much of the river, nymphing with heavy traces is generally the most productive. 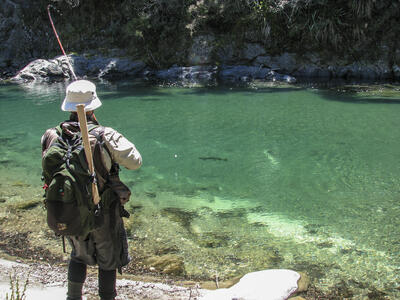 Anglers can raft some sections to gain access to these remote locations. Jet boat access from the middle reaches of the main river up to the Taruarau confluence is also possible. All types of flies, nymphs and spoons are suitable with larger and heavier flies often giving better results due to the depth and strength of the flow of the river. While rainbows dominate, with some large specimens present, the occasional brown is landed. In summer this section is well worth a visit because algae growth further downstream can make fishing less enjoyable.

Tributaries in this section include the Taruarau and lkawatea Rivers. These are smaller waters and generally require lighter gear and a more discrete approach. Topographical Maps NZMS 260 - U19, 20 and 21 provide more detail. The Kaweka Forest Park map is also useful. Refer access points 1 - 3.

Downstream of the Whanawhana cableway the river flows out over the Heretaunga Plains and can be accessed from a number of points. The riverbed is primarily gravel and is braided (multi channelled). Rainbow trout dominate in this section. Fishing methods and gear is similar to the upper reaches. Tributaries in this section include the Ohara, Poporangi, Tutaekuri-Waimate and Karamu Streams.

Originates in the inland tussock and beech forest country. Public access is limited on this river except for the Napier-Taihape Road and from the end of Comet Road in the southern end of the Kaweka Forest Park. This backcountry water provides good quality angling from summer onwards. Refer access points 13 and 14.

A major tributary of the Taruarau, it drains the northern part of the Ruahine Forest Park. The lower river flows through private land with no public walking access. The upper part is within the Ruahine Forest Park with the only practical public access being by helicopter to the Department of Conservation designated landing site alongside the lkawatea Forks hut. Waterfalls above the hut prevent upstream migration of trout.

A large tributary of the Ngaruroro River with a shingle bed. Fishes well in the early summer months before flows drop to low levels and the trout drop back out to the main river. Access is available via access points 15 and 16.

A deep spring-fed stream originating near Swamp Road. This stream, although very close to Hastings, is not easily accessible. It joins the Ngaruroro a short distance upstream of the Chesterhope Bridge at the "Floodgates" (access 11). The upper reaches can be accessed from Omahu Road between Taradale and Fernhill. To obtain access to fishing water you need to seek landowners permission to cross their property.

A slow meandering stream that flows from near Havelock North and joins the Clive River. Bait fishing along with fly and spinner methods are allowable. Access from Karamu North Road and numerous other points over private land with landowner permission.