West Coast Both Barrels May 2016

Large numbers of hunters turned out in the West Coast Region for Opening Weekend this year, both local hunters and many from other regions.

Conditions were ideal for waterfowling with fog and low cloud all through the lower river valleys keeping birds low and helping keep hunters concealed.

Hunters reported mixed bags, with some getting close to their bag limit early on, while others were not as successful. Rain in the week before the start of the season meant that there were plenty of places for the birds to go across the district.

With so much water available, the ducks are not confined to a few main wetland areas as in some of the drier regions.

While ranging, lots of birds could be seen on the wing and shots being fired indicated a large number of hunters out for the morning.

Compliance was positive over the weekend; those hunters checked appeared to be keen duck hunters who understood the rules.

It was pleasing to see a number of families, often father and son, out enjoying some time duck hunting.

The pursuit is very much a tradition on the Coast and it’s great to see different generations sharing the sport, often returning to spots they’ve hunted for many years.

Father and son, Gary and Samuel Glasson were out early on opening weekend.

Where to after Opening Weekend?

Further heavy falls of rain and stormy weather hit the Coast, flooding rivers, paddocks and farm drains around the region.

The new food sources this provides for waterfowl will open up some great hunting opportunities as birds move around to take advantage of this new food going into winter.

During the daytime after Opening Weekend, many birds will be either well out in open areas where they feel safe, or piled up in overgrown little creeks where they can hide out of the way.

Both types of habitat have the potential for great hunting opportunities during the season.

Finding birds’ loafing spots requires some effort but can provide good shooting. Often birds can be found grouped up on expansive river beds, or open estuaries.

If you can locate them and set up decoys and hides before they arrive, good shooting can be had well into the morning.

Walking small creeks with a dog provides great hunting as birds flush from within willows, etc. The West Coast has an abundance of these small creeks and this style of hunting can be enjoyed at any time of the day. Ideal for a walk after work.

The West Coast Region holds a range of waterfowl species to hunt.

Rather like pheasant shooting, they offer something different to those who enjoy walk-up style rough shooting.

They cook up well if done properly and if you tie your own fishing flies the feathers make great night flies, such as Craig’s Night Time or Scotch Poachers. 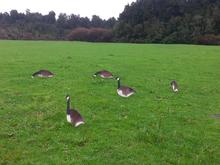 So keep an eye on any crop paddocks or young pastures as dropping in to see a farmer might just provide a good introduction to hunting for a young hunter friend.

In certain areas geese may also be seen passing by, so a few goose decoys and call may add some extra excitement to a hunt during the season.