With the cooler weather and a bit of rain starting to make itself present, the game bird season is starting to heat up around the country.

Hunters have reported success in all regions, even those that have faced a lack of water.

In drier areas, any area that holds permanent water was the place to be as bird numbers were more concentrated. 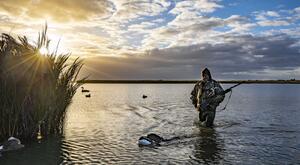 Canterbury hunter Stu Henderson and his dog Keisha return to the maimai after recovering a parrie.

As such an anticipated weekend, the opening of the Duck hunting season is very newsworthy. Here are links to two great stories. Click here to watch a TVNZ, One News item on Canterbury hunter Stu Henderson’s Opening Day, and here to watch the NewsHub piece on families hunting Opening Day.

It’s a reminder to have everything squared away and ready to go for when a favourable spell of weather comes through so you can be out there into the action with a minimum of fuss.

Be sure to check out the regional links above to get the latest info on how the season is going in your favourite hunting spots and potentially some new spots.

This month lots of the team are offering some great recipes that you can try out on your harvested birds.

Remember to keep an eye out for any banded ducks, whilst banding normally occurs in the North Island, it’s not uncommon for a banded bird to end up in the South Island like one harvested near Wanaka this year. It had been banded near Hastings last year and had flown down south, in straight line terms that’s’ 840km, but as we all know a duck rarely flies in a direct route.

Fish & Game’s Auckland Waikato game bird manager David Klee was the guest on Jordan Fromer’s popular Duck Gun Podcast in the United States this week. You can listen to him talking about game bird hunting in New Zealand here, if you are short of time, David is introduced at 18:30 minutes.

Remember to check out nearby regions for hunting opportunities and take the option of a bit of game bird tourism.

Best of Luck, The Team at Fish & Game

Posted in Both Barrels, Hunting; Tagged Hunting Posted 13 months ago by Richie Cosgrove