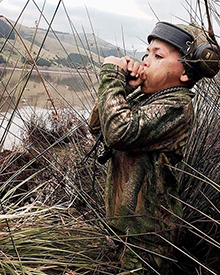 It’s only a few days to go before the new season opens, and the prospects are looking good throughout much of the country.

Rain has fallen over large parts of the country in recent weeks, topping up dam and pond levels after a hot summer, and restoring river flows.

Throughout Fish & Game’s 12 regions, reports are coming in of good game bird numbers, prompting predictions that 2019 will see successful harvests. And that translates into some good plump birds on the family dinner table!

In the Central South Island, the latest duck counts are the second highest recorded since the annual surveys kicked off in 2007.

Further north in Taranaki, there are “strong” mallard populations and parrie numbers have rebounded.

Upland species like quail and pheasant have also done well over summer and if you haven’t targeted them in the past, make 2019 the year to give upland hunting a try.

As the countdown begins until the new season begins on Saturday morning 4 May, now is the time to make sure you have everything ready.

Give your decoys one last inspection, put new batteries in your head lamp and make sure your duck call is with the rest of your gear.

And buy your licence now instead of leaving it to the last minute!

Above all, if you use a semi-automatic or pump action shotgun, make sure it complies with the new firearm laws.

More detailed information on the new laws is available below, but basically if your gun has a magazine capacity of more than five shells, or has a magazine extension, it is illegal.

P.S. Our photo above shows Nixon Martin putting his duck calling to the test – showing you’re never too young to learn.

P.P.S - If you think you've got a hunting image worthy of featuring on our 'cover', email it to Richard Cosgrove for consideration.

A Note From The Mountain Safety Council

Opening weekend for game bird season around the country is about to get underway. While there’s a great deal of excitement and atmosphere building, safety should be front of mind says Mike Daisley, CEO of the Mountain Safety Council (MSC)

“We know from our insights that 64% of all game bird hunting injuries occur in May and that the majority of these are preventable,

“In fact, 41% of the annual total of ‘Game Bird’ hunting injuries occur on opening weekend,

“We’re keen to have a zero in the fatality, search and rescue and injury column this year. It’s 100% achievable if hunters heed the firearms safety rules,

“A lot of families will be affected by incidents that are likely to occur over the weekend. The tragedy is that firearms-related incidents are entirely preventable,

“The vast majority of hunting incidents that involved a firearm can be traced to one or many of the firearms safety rules not being followed,” he concluded.

Anto Hall from the Red Stag Timber Hunters Club NZ who helped to develop a series of hunting specific safety videos with MSC is keen to make sure the last two years of low incident rates continue, especially given the public attention and nervousness about firearms at the moment

“Be mindful of where the firearm ends up. People stand them up in MaiMai’s all the time. But, if it’s a loaded weapon that’s a recipe for disaster. You’ve got dogs around, guys jumping up and moving around the MaiMai, so you’ve got to remember to keep the chamber empty if you’re not shooting. Don’t rely on safety catches, check and empty so you’re always safe. ”

“A successful hunt is one where you’re out with your mates and you all make it back home in one piece. If you happen to get a few birds that’s great, but don’t risk a serious injury or worse just because you’re too lazy to follow the procedures.”

“It all comes down to good communication. If you’re not sure if your mate’s shotgun is safe, then you have to ask him! He should do the same for you.”

“Opening weekend is a very social occasion, but we’ve got to take a long hard look at ourselves with respect to alcohol and firearms. The best way to be safe is really to leave the alcohol until after the shoot. It’s worse than drink driving in my opinion and should be seen and managed in the same way. Celebrate for sure, but don’t ever do it while you’re shooting.”

Daisley reiterated MSC key message to make it home in their hard-hitting “Early Bird” video that explores, from a first-person view, what a firearms incident while duck hunting might be like.

“The main video, as well as two shorter 30-sec versions, is very emotive and is designed to get a conversation going within families. The video has been specifically produced to strike a chord with the friends and families of the hunters,” he said.

Both the videos as well as the research ‘A Hunter’s Tale’ can be found on the MSC website — mountainsafety.org.nz.

Posted in Both Barrels; Posted 4 years ago by Default Admin