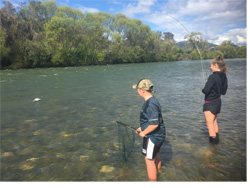 Signs of spring are everywhere – and one of those early signs is that licences for the new trout and salmon season are now on sale!

While your new 2018-19 licence can't be used until October 1, your old licence is still current all the way through to September 30.

That means you can get out now on the wide range of rivers and lakes which have remained open over winter and blow the cobwebs out of your angling skills.

It doesn't matter if you're a spin or fly angler, now is the time to practice your casting so that when the new season arrives, you can make the most of the great spring and summer fishing which will be available.

And there are some great opportunities waiting for the new season to open.

In the Auckland/Waikato region, Fish & Game staff say recent returns from Lake Arapuni have been impressive with several large browns caught over the past few weeks.

They add that although many streams have been high recently, post spawning fish should be actively feeding and on the move.

Rotorua staff in the Eastern region say they're encouraged by an excellent winter run of "solid rainbows" at their Lake Tarawera fish trap.

In Wellington, the word is that the mild winter and lack of significant floods has set the season up to be a "cracker", with the prediction that "anglers can expect to encounter fish much heavier – and feistier…"
Down south, in the Central South Island, there are fishing opportunities galore at the Mackenzie basin canals and seven Waitaki catchment hydro lakes.

Across the Southern Alps, it's a badly kept secret that lower reaches of West Coast rivers fish well early in the season. 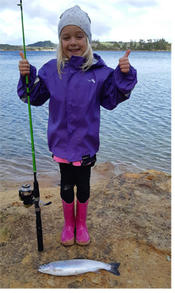 It's a similar story from Nelson Marlborough staff who say that September fishing can be "fantastic" on some of their open lowland rivers.

In Otago, all the main lakes have been fishing well with reports of fat fish and enjoyable angling. Staff say the Lake Dunstan spawning run has produced some "amazing" fish over four kilos.

In a number of areas, brown trout spawning is over and hungry browns are trying to rebuild their condition by cruising the shallow lake margins in September "looking for anything edible." So anglers, wherever you are, get amongst it!

P.S. Kids are in the spotlight! This month's cover pics show hardy Madeline and Jack in the Motueka River (who needs waders?).  And left, at Lake Taharoa up north, Crystal Prins with her catch, snapped by her Dad Rod 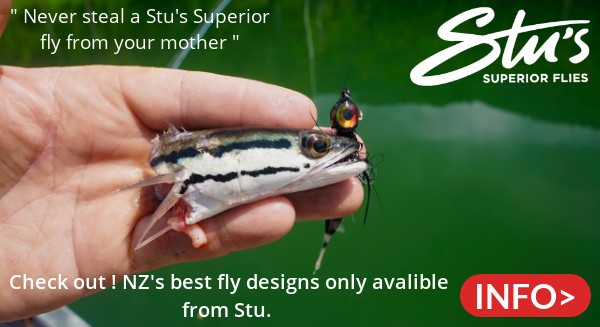 Creasy's Column - By Hugh Creasy
Spring chores are many. The lawn is moss-strewn and patchy, and weeds dot the vegetable patch, but the call of the river is too strong. I must give an answer. Winter has not been wasted. New leaders have been attached to old lines and with a bit of luck the lines will last out the season. Some judicious cleaning has them brightly polished. My fly boxes are filled in colourful array, with nymphs aplenty and pretty dries looking soldierly in ordered ranks. There are gaudy Wooly Buggers and sombre Mrs Simpsons – and oldie but a goody in the evenings – with a smattering of Parson's Glories if there are little fish in sight. A few whitebait imitations in plainer vestments complete the larger lures.

I put new rings on a replaced rod tip, lubricated the reels for my old rod and had a practice cast on the front lawn with my new rod, a weight five that brings joy with every stroke. If only I can catch a fish worthy of its grace and of its price.

Everything is checked and rechecked, and all seems to be well. It remains for the knots to hold and the leader strength to be what is printed on the label. Continue reading here.