Ideally the photo will depict the chosen game bird in its natural habitat. In some instances a photo of a harvested bird will be accepted however it must be tasteful and highlight the bird well.

We are running two competitions this year so we can be two years ahead in production of the stamps and associated merchandise. 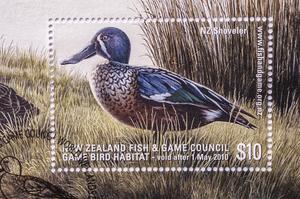 The selected game bird species to feature for the 2021 photo competition is the New Zealand shoveler.

Also known as the “spoonie”, the shoveler has comb-like openings in the side of its spoon shaped bill that let it sift fine insect life from the surface of biologically rich wetlands.

The shoveler was uncommon last century but there are now around 150,000 in New Zealand. Because of its' specialised habits, it is unlikely to ever be very common, but birds have moved into wetlands designed for them by Fish & Game NZ. 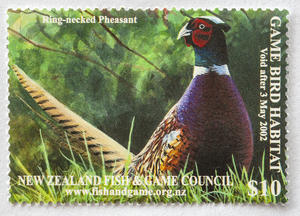 Pheasants are one of New Zealand’s most sought after game birds. Their bright plumage and superb eating qualities make them popular with all game bird hunters.

The first English pheasants arrived in Wellington in 1842 and further liberations resulted in the bird being abundant in both islands by 1870. The pheasant population then plunged into a remarkable decline, from which it has never recovered, due to eating poisoned grain used for rabbit eradication followed by the release of stoats and weasels to quell the rabbit plague.

However, there are still enough pheasants for hunting, assisted in some areas by annual releases of hand reared stock.

Your entry must be submitted digitally via the Fish and Game website below.  No other forms of entry will be accepted.

The competition winner for 2020 was Marlborough's Matt Winter, learn more about his photo here.

The next game bird species to feature is the NZ Shoveler (spoonbill) followed by the pheasant.

A panel of Judges will select images based upon technical quality, plus the aspect and background to the subject bird. The ideal shot will be of the nominated species at home in the sort of natural environment where it will thrive. Judges will look for diversity, originality and creativity of the composition. Judging will be anonymous.

The decision of the organisers is final and no correspondence will be entered into concerning the competition’s judging and organisation. Once the winner is announced, all ownership rights to non-successful entrants will return to those entrants.

Entries are required by 1 September 2020

Selection of winning entries for the two habitat stamps will be made by mid October 2020.

Preparation of habitat stamp & its release

Winning entries for the two habitat stamps will be submitted by the New Zealand Fish and Game Council to NZ Post by mid November 2020.  The image will feature on the Habitat Stamp to be released February 2nd 2021 & February 2nd 2022.