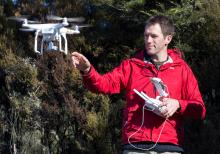 It is not only the reduction in cost, or ease of flying the drones (Unmanned Aerial Vehicles, or UAV) which is appealing to the non-profit organisation, but the safety and accuracy they provide.

The video and still images captured from the aerial perspective enables more accurate numbers to be taken.

“A field officer can focus on the imagery back in the office, rather than trying to jot down figures while flying in a helicopter, or buzzing along the river in a jet boat,” says Andrew Currie, Fish & Game’s South Island Communications Advisor.

“This coupled with the new Health & Safety legislation before parliament, having our staff spending more time on the ground rather than in the air for long periods is also an obvious advantage,” he adds.

Te Anau based drone pilot Adam Butcher, cannot believe how close to the trout he can manoeuvre his craft.

“It’s an incredible tool for this sort of work; the low noise doesn’t disturb the fish life, so we can get to within a few feet of the trout.”

“We’ve flown the drone right over top of the trout and though we can see the ripples from the propeller’s downwash on the water, it appears that for the most part it doesn’t bother them.”

Nelson-based senior field officer, Lawson Davey, who oversaw the Cawthron flights, believes being able to programme the UAVs to fly the same transects over and over, “will mean our figures are more robust, enabling better management of the gamebird and sports fish resource.”

Mr Davey also suggests that Fish & Game will be able to carry out more monitoring due to the relative cost – compared to chartering helicopters and fixed wing craft – but for his region being able to accurately count birds in waterbodies, with dense vegetation and cover, is a huge advantage.

“We have been very impressed by how tolerant the birds are and how close the drone can get without spooking the birds off the water.”

More tests are planned in several Fish & Game regions over the coming months, and with some operators now offering infrared and 4k imaging capabilities, Mr Davey believes “the future of using drones in our monitoring and other aspects of our field work is looking very encouraging.”

To view video of the surveys, please click the following links. Raw files are available on request.