Rules For Non-Toxic Game Bird Hunting: In New Zealand it's compulsory to use non-toxic shot when hunting waterfowl with any gun using a 10 or 12 gauge cartridge for all areas, including private land, within 200m of a water body and wetlands.

For most hunters this means using steel shot, although others such as bismuth and tungsten alloys are available. 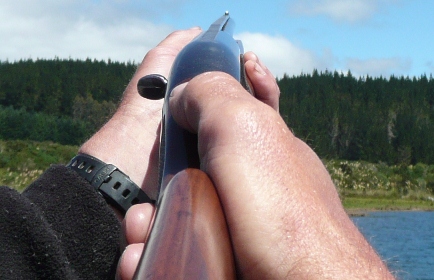 Lead shot has been banned or restricted in many parts of the world for many years because it's been shown to poison ducks that accidentally eat it as grit. Studies showed that New Zealand was no different to other countries that had already switched to non­-toxic shot. The Government made the decision to go non-toxic, and requested Fish & Game to implement a staged and progressive introduction of non­-toxic shot provisions several years ago.

The 200m rule may sound like an odd exemption, but it does allow, for instance, hunting waterfowl over paddocks with lead. The Government originally proposed that ALL lead shot be banned for all activities, including ALL upland gamebird hunting, ALL clay target shooting and ALL farm pest control. Fish & Game was successful in having this extreme requirement softened.

The 200m rule recognises that lead is not a problem away from waterways. Equally, the smaller number of shotguns of gauges "less than 12" are not a statistically important factor in waterfowl poisoning by lead shot. Black powder exemptions are even fewer in number. Black powder burns through shotgun wads so it's not really practical to force non­ toxic shot upon these shooters when plastic wads are essential to protect bores from most types of non-toxic shot.

While the 200m rule could be criticised, no one has yet thought up a better rule to fit the circumstances. A complete ban on ALL lead shot is very easy to understand. This is the alternative that was proposed. The concessions have been hard fought for to allow for paddock shooting of ducks and parries especially. Please respect them or we may all find that the original proposal to ban all lead shot may be introduced.