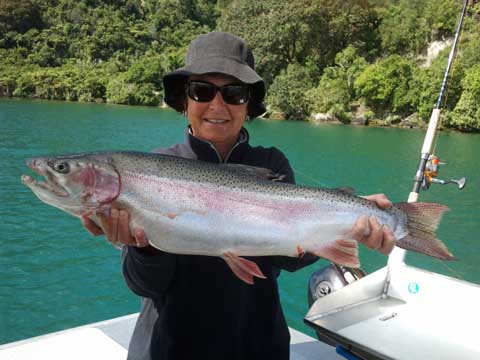 If you’re reading this on or just after October 1, Rotorua’s terrific trophy lakes are open and fishable again.

You could catch one like this on Opening Day...

Lake Rotoiti has also produced some superb large fish in recent times. Most trout caught over opening will be two-year-old fish as they are the most abundant group of fish above the minimum size of 35cm, he says.

These two-year-olds will average around 49cm on Tarawera and 51cm on Rotoiti and Okataina, given differences in how the lakes have been performing over recent seasons.

Shallow trolling with a ‘Tassie’ and a smelt fly is a successful way to begin. If the day turns out to be sunny and there’s lots of boat traffic, expect the fish to move a little deeper. 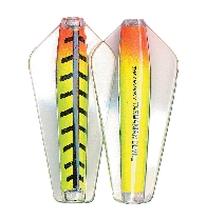 Under these conditions we suggest anglers adopt a deep trolling method such as lead line, wire or downrigger.

It’s hard to beat orange as a lure colour early in the season, or something with a touch of red and don’t forget to try the ‘old faithful’ black and gold toby!

The rivers throughout the Eastern Fish & Game Region are expected to provide more challenging conditions due to all the rainfall weve had over the past six months.

A combination of high water tables, dirty water and sediment loads will make things interesting for the riverine traveller.

Mr Osborne adds that anglers may be better off getting higher up into river systems above major tributaries where less water should result in clearer reaches.

Some of the popular waters such as the Whirinaki and Rangitaiki may remain coloured up for several months given the amount of rainfall that’s fallen recently.

Eastern staff invite readers to call for tips and information on 07- 357 5501, or visit the Fish

Will anyone catch the ‘golden’ fish worth $10,000? Another fish could net someone an outboard motor worth nearly $1000. Entries to the Fish for Gold promotion close on Saturday September 30. 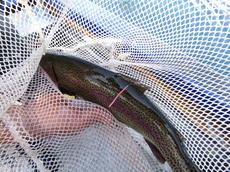 Fish & Game staff have released 30 rainbows with numbered pink tags at random spots – ten fish into each of three lakes – Tarawera, Rotoiti and Okataina. The event runs until Sunday, October 8.

‘Tens of thousands’ of fish released

Spring releases of fish grown at the Ngongotaha trout hatchery are in full swing.

Around 50,000 yearling trout will be released over September and October to top up the natural stocks as most Rotorua lakes don’t have enough habitat for wild spawning to meet angler demand.

The fish average 18cm at release and will approach legal size (35cm) after six months in the lakes. At two-years of age, they will be around 50cm in size.

Fish & Game staff and helpers have already released fish into Okareka, Okataina, Rotorua and Rotoiti. All fish leaving the site are fin clipped and 500 fish from each release also have a tag that tells categorically which liberation group and date that fish belongs to.

The length is the most important detail. If you catch a tagged fish, please send the details including date of capture, length, weight and your name and address along with the tag to Fish & Game (Eastern Region) Private Bag 3010, Rotorua 3046. All returns go in the draw for 20 whole season licences.